Checking up on the 2019 Construction Outlook 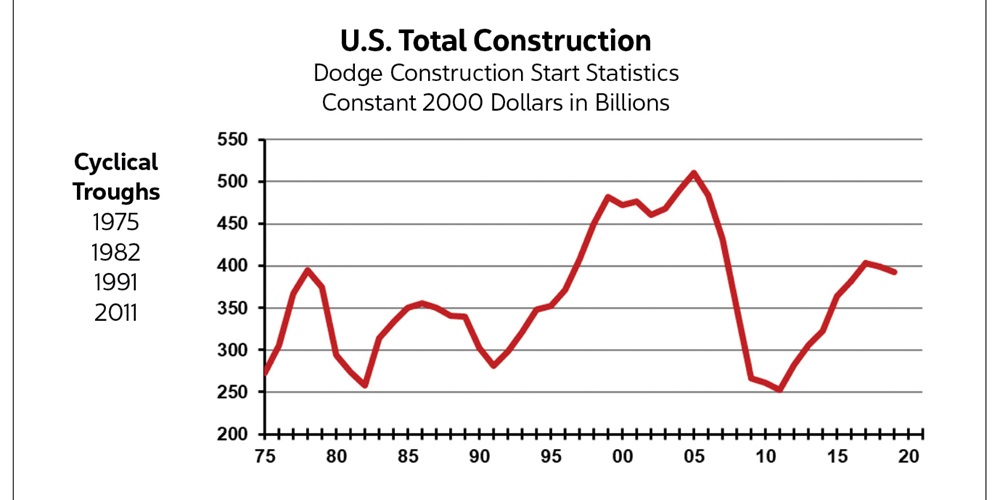 We are halfway through 2019. It has been a period of tariff talks, crippling floods and an elusive infrastructure bill. Have these events thrown the 2019 construction forecast off its axis? The short answer is no.

Dodge Data & Analytics presented a spring update of its 2019 Dodge Construction Outlook on June 12 in Chicago. Dodge’s chief economist and vice president, Robert Murray, shared the latest 2018 performance data and 2019 construction activity to date to paint a picture of an upward construction cycle leveling off.

“The expansion is continuing with some deceleration marked by sluggish first-quarter performance, particularly in public works,” he said.

“As an economist, I don’t look at starts-to-date as something to be overly concerned,” he said. “Let’s see how the second half of the year goes. Right now, total construction is up 1 percent.”

Public works most acutely felt the slower activity in first quarter 2019. Murray expects it to bounce back but revised growth predictions down to 2 percent from 4 percent.

The latest news in single-family housing is a market stuck. Though its 2018 gains of 5 percent (revised from 3 percent) is good news, revisions for 2019 represent a retreat to –3 percent.

“The mortgage rate is back below 4 percent, which you think would be a motivator. Affordability is an issue. Millennials see prices modifying but still too expensive to pull that homebuying trigger,” Murray said.

Meanwhile, multifamily beat forecasts with an 11 percent gain in 2018. Lending for this sector, however, is pulling back in 2019.

While manufacturing plants and electric utilities remain volatile, manufacturing no longer drags down total construction activity. Activity was up 23 percent in 2018, a revision from 18 percent reported in January 2019.

Even electrical utilities/gas plants started to show unexpected gains (LNG terminals are providing a lift) at the end of last year. This year could show a 39 percent gain from –25 percent in 2018.

The Dodge Momentum Index (DMI), gauging construction in the planning phase, may be “losing some steam” though not much, Murray said.

“The DMI did show a decline in third quarter 2017 but renewed growth through July 2018,” he said. “It has since settled back through May 2019. Right now, commercial planning is down 20 percent since July 2018. Institutional is down 7 percent since April 2018. This is an indicator of ‘settling back’ leading to a downturn at some point. The DMI likely peaked in July 2018.” Lending for commercial and industrial has eased, a positive development.

The current state of the economy

Murray views the economy as tailwinds and headwinds. Lifting the economy’s sails, he cited overall gross domestic product landing at 2.9 percent for 2018 and rising to 3.1 percent for first quarter 2019. The Federal Reserve is holding long-term interest rates low (though, in June, it suggested it was considering cutting rates). State and local bond measures continue to support school construction (community colleges up 71 percent in 2018 and high schools up 24 percent between 2016–2018). Federal highway funding saw a 2 percent increase. Tariffs on steel and aluminum were removed between the United States, Canada and Mexico. New tariffs levied against Mexico over migrant control were averted. Finally, market fundamentals for commercial and multifamily housing strengthened in 2018. Unemployment stands at 3.6 percent.

“It does seem we have reached our peak in this recovery,” he said. “Our take on a decline in construction activity [recessionary] is maybe as much as 15 percent. That, however, is nowhere near what happened during the Great Recession. Maybe we don’t even see a decline as much as steady stability. I expect a moderate pullback through 2021 based on the pattern of starts but see increases in 2022–2023. Assuming a recession comes, I don’t expect it to be bad, except for multifamily housing. The guess for an anticipated recession is between 2020–2021.”

In summary, Murray said, “I don’t know if the forecast has changed that much. I am seeing a flattening of activity. Starts range between –3 to +2. Single-family has seen some gain. Commercial is essentially flat. Institutional is re-establishing. Public sector work could still show gains. I expect manufacturing will as well.”