Some Strings Attached: The challenges of solar, storage and going off-grid 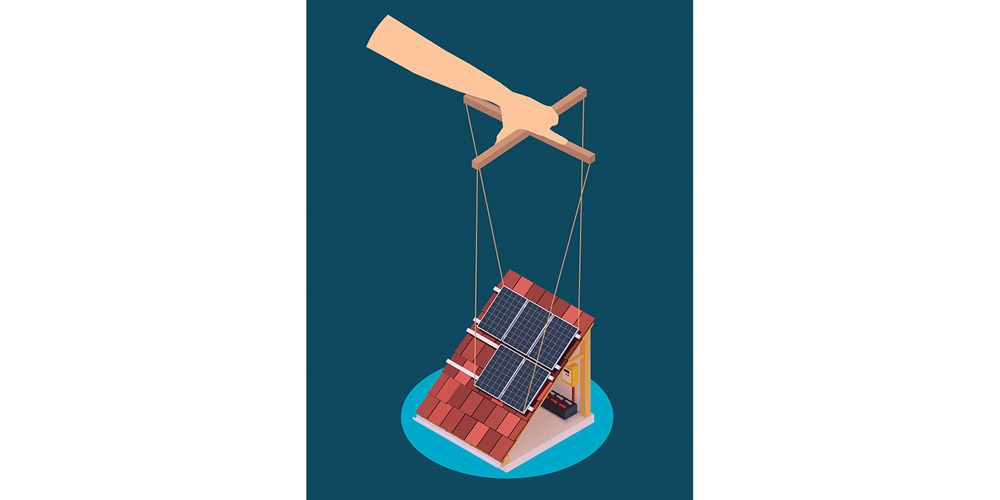 The impact of the COVID-19 pandemic on the solar power market has been dire, with research firms cutting 2020 forecasts by up to 20%. Residential projects face particular challenges, as consumers confront their budget cutbacks and seek to limit contact with those outside their immediate households. However, there are signs of hope, once the pandemic’s vise eases. Many see the combination of panels and batteries as a way to improve their homes’ resiliency.

But even as paired approaches become more popular, experts say we’re still a long way from complete home-energy independence. Going totally off-grid only makes sense in a few very specific cases. It requires either huge expense or major compromises on how most of us prefer to live our lives. And some utilities are beginning to compensate solar-plus-storage customers for the benefits these systems can add to their distribution systems, offering homeowners a chance to profit by staying connected instead of going it alone.

Those on the solar industry’s front lines have seen their business drop precipitously since COVID-related shutdowns and social distancing policies went into place.

“Residential has been the hardest hit—we’ve seen a significant slowdown on installs,” said Suvi Sharma, CEO of Oakland, Calif.-based panel maker Solaria. “On average, it’s about a 60% reduction from what we’d see in April.”

The drop in consumer demand isn’t the biggest factor in the decline.

“The single biggest hurdle has been getting permits, because government offices are closed,” he said.

He has heard of some installers resorting to sleeping in front of municipal-building doors, to guarantee a front-of-the-line spot, as building departments have limited the number of people allowed into buildings at any one time.

By late April, however, Sharma had begun to see a slight uptick.

“I do think we’ve hit a trough,” he said, noting a 10% week-on-week rise in issued building permits for residential solar projects. He predicts the second quarter will be at 50% of last year’s installation volume for the same period.

Vikram Aggarwal has a more direct view of how consumer interest has shifted in the current pandemic environment. He is the founder and CEO of EnergySage, an online marketplace for homeowners seeking information and price quotes for solar and storage installation projects. While his company’s website saw a drop-off in inquiries through March, interest started climbing again in April. The company also conducted a survey the first two weeks of April of consumers who had been actively looking to install solar prior to the pandemic. They found those potential customers were actually more interested in pursuing solar and storage than they had been earlier.

“The reason is the resiliency aspect of solar, as they are thinking about their life right now—they would love their own source of energy,” Aggarwal said.

Respondents were mixed on the pandemic’s impact on their scheduling plans. Half said their previous timeline had been pushed back, though only 7% said that they’d be delaying more than a year. But a third stated they were actually moving up their plans as a result of COVID-19.

“I think the good news is that consumer interest is strong and getting stronger,” Aggarwal said. “But the reality on the ground is they’re not doing installations until things get strengthened.”

In the period leading up to COVID-19’s U.S. arrival, the residential solar/storage market was increasing rapidly, with three consecutive, record-breaking quarters closing out 2019, according to Wood Mackenzie’s Energy Storage Monitor 2019 Year in Review. Fourth quarter installed capacity was twice that of the same period in 2018. Sharma said those trends were reflected in the business that installers of his company’s products were seeing, as well.

“It’s growing by leaps and bounds, and, in California, it’s exponential in its increase,” Sharma said.

Of course, California has long been a leader in solar power. Now, more residents see the value of adding batteries when they install new panels to provide backup during wildfire season, when some utilities are powering down their systems to eliminate arcing as a possible fire threat.

“Many of the installers are saying that, in California, half the installations are with storage right now. They’re a bit like perfect partners with each other.”

Last October, Californians in some areas were without power for up to a week, due to high fire-risk weather conditions, which only emphasized the appeal of generating and storing one’s own power, independent of the grid, Sharma said.

“Fundamentally, now, solar is an economic decision—for the majority of Americans, you’re going to save money over the life of the system,” he said. “With storage, it’s not economical, but you’re getting other things, like peace of mind and security.”

But, despite how well solar/battery pairs might help support households during periodic outages, Sharma said it’s a much farther stretch to become completely utility-independent with such systems.

“I think it only makes sense if you don’t have the grid to begin with,” he said, using the example of a remote mountain home to make his point. “The amount of storage you’re going to need is really astronomical.”

Aggarwal agreed with this assessment.

“In a very few cases does it make sense—and a number of things have to be true. Number one, your property is in a very remote location, and, number two, you’re consuming very little energy,” he said. “You’re also going to need a hefty budget for the project. It’s going to be very expensive—a solar-plus-battery system that can meet your needs for days at a time might not be very practical.”

The reason for this dim assessment comes down to numbers. Going completely off-grid means more solar-generating capacity, along with storage scaled for the worst of worst-case scenarios, such as a week of low-production, cloudy days or a snowstorm that buries your solar panels.

“It really comes down to more storage,” Sharma said. “I would say the percentage increase you’d want of solar would be around 50% more,” which would scale a typical 8-kilowatt (kW) rooftop array up to 12 kW. “But you might need five times the batteries.”

He notes that there could be workarounds to reduce the need for so many batteries, but these would come with their own added expenses. For example, you could connect a battery to a subpanel to power-critical equipment such as refrigerators, internet routers and some interior lighting. That would at least keep those devices up and running, but it could mean you couldn’t use a dishwasher or washing machine during an extended outage.

“Fundamentally, now, solar is an economic decision—for the majority of Americans, you’re going to save money over the life of the system. With storage, it’s not economical, but you’re getting other things, like peace of mind and security.”

“So, you could live normally on sunny days,” Sharma said, drawing on the most popular battery system as an example. “But, unless you’re going to brute-force it with 10 Tesla PowerWalls, it’s going to require some optimization and a willingness to make changes in lifestyle.”

Adding a natural gas or propane generator to the system to supplement the batteries is another option some homeowners might turn to. Initial costs would be less with this approach than depending on batteries, alone, for backup, but ongoing maintenance requirements could prove more costly, over time, Sharma said.

“Many customers go ‘all-of-the-above,’” he said, describing multisource designs, and noting the interest of at least one traditional generator maker in this business. “That’s why Generac has gotten into it. If you need the back-up, that’s a pretty good way to go.”

Generac purchased the battery manufacturer Pika Energy in April 2019 and launched the PWRcell storage system in September. The product is now available through Generac’s existing network of distribution partners.

Unlike the engineering required for full off-grid operation, calculating requirements for more standard, grid-connected systems is rather straightforward, Sharma said. It begins with taking a close look at your last year’s total energy consumption.

Consumers can use EnergySage for this service. The answers will depend on the make and model of panels they select, because power production can vary widely. Higher-efficiency panels might cost a bit more, but they can be key to meeting energy goals where roof space is limited. Solaria just introduced one of the top-producing panels now on the market, the PowerXT 400, with an output of 400 watts.

The number of panels needed also will vary by geography, Aggarwal added, a variable that’s generally incorporated into most system-design calculators. While panels might have a high rated output, reaching that maximum capacity will depend on the amount of sunlight to which they’re actually exposed. So, to meet similar output goals, a 6 kW system might be required for a home in Massachusetts, where a 4 kW system could suffice in Arizona.

Sizing storage systems depends on how a homeowner plans to use the batteries, Aggarwal said. For backup and resiliency purposes, this can start with understanding typical daily energy needs. For most, this falls between 15 kilowatt-hours (kWh) and 20 kWh, he noted. Given the sun’s likely contributions to both daytime demand and battery recharging, “a typical 10 to 15 kWh battery is sufficient for two to three days.”

However, it also can make sense for the contractor to look beyond just today’s requirements, Sharma said.

“A more sophisticated approach is to look at the trends—are you going to be increasing or decreasing your electricity usage?” he asked, noting growing consumer interest in both electronics and electric vehicles.

“One electric car typically will increase your electricity requirements by 20%. More and more people are doing that, especially in California,” he said.