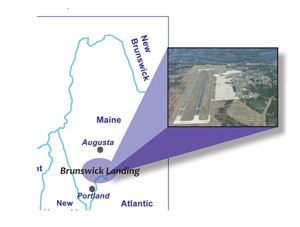 It’s almost an axiom that new technologies often get their start in the military. Take the Internet.

In Maine, a former naval facility will become a center for innovation. The former Brunswick Naval Air Station, which the Navy vacated last year, has been reincarnated as Brunswick Landing: Maine’s Center for Innovation. The 1,700-acre, multi-use facility includes space for commercial, industrial and residential uses.

The Midcoast Regional Redevelopment Authority has been overseeing the transition of the site from military to civilian use. Already, the center boasts 15 businesses.

One of the jewels of the redeveloped property is the Brunswick Renewable Energy Center, a campus that is being touted as a national center for clean tech and green jobs because it will support the generation of renewable-energy power as well as research and development of renewable technologies.

The location is ideal for both the generation and study of renewable power in part because of a closed-loop electricity delivery system left by the Navy. That system could become the building block for on-site generation and delivery and is a potential marketing point for future tenants who could benefit from lower electricity rates. It could also be a focal point for researchers.

In an effort to make the site as energy-efficient as possible, the center recently completed a major upgrade of its street and parking lot lights. Replacing existing lights with light-emitting diodes is projected to reduce consumption by 237,632 kilowatt-hours per year, a 68 percent reduction.