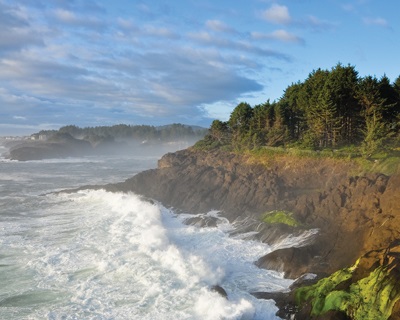 The Pacific Marine Energy Center (PMEC) will test energy generation potential and the environmental impact of wave-energy devices at an ocean site about five miles from shore. Subsea cables will transmit energy from the wave-energy devices to the local power grid and data to scientists and engineers at on-shore facilities.

The first installment of funding for PMEC was received in September 2012, consisting of $4 million from the U.S. Department of Energy, along with a nonfederal cost match.

“PMEC represents a major step toward the development of energy from Oregon’s ocean waters,” said Jason Busch of the Oregon Wave Energy Trust. “I’m certain that Oregon will reap benefits from PMEC for many years to come, and the research and development performed at PMEC will help usher in this new form of reliable electricity from the sea.”

PMEC design and specific site characterization will begin soon, along with the permitting and regulatory process. NNMREC will continue to work with a variety of partners to develop additional funding sources. The exact ocean location for the PMEC site will be finalized in the next few months in a zone that has been selected in collaboration with ocean stakeholders—an area that will not impede shipping lanes and takes environmental impacts into consideration.

The PMEC will have four “test berths,” open spaces of water dedicated to testing individual devices or small arrays of devices, each of which will be connected to the community’s electrical grid. It will also collect data associated with environmental and human dimension impacts. Completion will take several years.