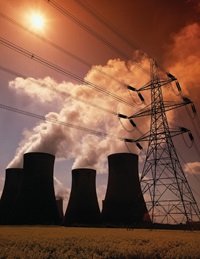 A 500-kilowatt solar power system supplements 15 percent peak power to water treatment operations in northern New Jersey. A 250 kW fuel cell helps manage electricity demand and address ongoing air-quality concerns at a Southern California water reclamation plant. Despite many alternative power projects like these from coast to coast, renewable energy consumption has a long way to grow before it competes with our demand for electricity and fossil fuels.

Specifically, the electric power and industrial sectors continued to dominate renewable energy in 2004. The transportation sector had the greatest increase with a 24 percent jump, due to the expanding use of ethanol fuel.

The Energy Policy Act of 2005—the country’s first legislative plan relating to alternative energy in more than a decade—promotes investments in energy conservation and efficiency diversification. The bill promotes use of renewable energy sources with tax credits for wind, solar and biomass energy, including the first-ever tax credit for residential solar energy systems.

“This is definitely the new wave in our industry,” said Raymond DeMarco, project manager for Allan Briteway Electrical Contractors Inc, Whippany, N.J. “It’s the right thing to do because it’ll take a client who has large electric bills and it helps them put something back into the grid.”

The bill also expands hydrogen technology research, which could accelerate fuel cell development. Fuel cell development is gaining momentum as the commercial market explores its applications to business power generation, motor vehicle and residential sectors. With the upswing in technologies and applications, the opportunity for installation projects has increased.

“In terms of installation of power and integrated building systems, fuel cells offer an attractive solution for backup power,” said Mark Schiller, director of business development for Proton Energy Systems, a hydrogen generation technology manufacturer. “They can also reduce the grid requirements when they are integrated into renewable systems. In these types of applications, the fuel cells can be used during peak power demands when grid power is more expensive and utilize the grid during off-peak times to recharge the fuel cell systems.”

As alternative concepts gain ground, key industry organizations are taking steps to prepare a work force that is seeking expertise with specialized installations. According to DeMarco, the National Electrical Contractors Association (NECA), the International Brotherhood of Electrical Workers (IBEW) and National Joint Apprenticeship and Training Committee (NJATC) have developed training programs designed to assist electricians with the installation of solar energy products.

“If and when solar ever becomes a big boom for us, the industry wants to be able to supply the number of qualified people required to do the work,” said DeMarco.

Solar technology provided the platform for a successful model that is making it possible for New Jersey American Water to treat water using less energy. Last summer, the utility installed a 502 kW ground-mounted solar power system designed to provide up to 15 percent of the peak-use electrical power needed to supply the nine-year-old treatment plant.

One of the most densely populated states, New Jersey has jumped ahead of California to take a leadership role in the solar energy market as an early adopter with utility, residential and commercial systems. The Garden State also extends economic incentives to solar customers and is home to private organizations with programs to finance installations.

The sheer size and complexity of the installation required a highly coordinated crew to install two massive configurations of solar panels—the north and south arrays—each one spanning the area of a football field.

The first stage of the four-phase project started with the assembly of the PV panels, which were sorted into 11 groupings of three panels each. The 33 panels were connected to a combiner box. The next step was the arrangement of the PV array on its support structure. The third step involved direct current (DC) wiring of the two arrays. The fourth and final phase of Allan Briteway’s construction was the transmission of the DC power to the New Jersey American Water grid at the company’s substation.

Getting the system online was a six-week process. The DC power, from the wires attached to the PV array, is connected to an inverter that changes the DC to alternating current (AC). The AC power is then delivered to a transformer that steps it up from three-phase, 480 AC to 5-kilovolt (kV) AC power for entry into the water treatment grid.

New Jersey American Water will see savings from the solar technology in several areas. Financial projections target the new system to pay for itself within approximately seven years. Beyond the dollars, the unused energy generated by the plant has the capacity to service 500 homes.

The environmental advantages of PV are equally substantial. Employing sunlight eliminates the pollutants and other byproducts associated with producing energy from fossil fuels. It also creates less sulfur dioxide, nitrogen oxide and other gasses that can pollute bodies of water.

As part of the implementation of the Sanitation Districts of Los Angeles County’s Antelope Valley Green Energy Program, a 250 kW combined heat and power facility, with a molten carbonate fuel cell energy source, was constructed at a water reclamation plant in Palmdale, Calif.

The project was funded in part by a grant from the California Public Utilities Commission’s Self Generation Incentive Program (SGIP), which supports the installation of new low- or zero- emissions self-generation units to help the state of California manage peak electric demand and address ongoing air quality concerns. Through the SGIP, the Sanitation Districts of Los Angeles County was successful in securing 50 percent of the total installed cost to reduce expenditures on the fuel cell project.

The Palmdale plant provides primary and secondary treatment for approximately 9.5 million gallons of wastewater per day to serve approximately 100,000 residents. Prior to installation of the fuel cell, the Palmdale site was found to generate approximately 80 CFM of digester gas. Eighty-five percent of the gas was being flared, and the balance was used to fuel a boiler for digester process heat.

According to the Sanitation Districts of Los Angeles County, fuel cells offer a number of potential benefits for water reclamation plants. A fuel cell system can convert a large percentage of the digester gas into power for use by the plant, while also producing a hot exhaust gas that could be used for digester process heat. In addition, since fuel cells can generate electricity and heat without combustion, it would produce virtually no regulated air emissions while also reducing digester gas flare emissions.

“The use of biogas from the wastewater treatment as an energy resource provides an effective and efficient alternative to our customers by managing their energy resources, conserving fossil fuels, significantly reducing air emissions and allowing them to enjoy substantial economic benefits,” said Don Davis, electric power sales engineer, Quinn Power Systems.

Following installation, which broke ground in January 2004, a succession of tests to each system component was conducted. First, Quinn conducted testing of the fuel treatment skid to ensure that digester gas was being supplied at the correct pressure and quality.

Next, the water from the local city source was tested to ensure that its quality was within the required parameters of the fuel cell. Finally, Quinn conducted the fuel cell’s ramping scenario in which a small amount of electricity was generated, and the output of the fuel cell was incrementally increased over time until it reached the full 250 kW load.

With the new system in place, Davis said 70 to 80 percent of the Palmdale facility’s digester gas is used to generate 225 kW (net) of power for use at the facility. Considering current power costs in the Los Angeles area, the Sanitation Districts of Los Angeles County estimates an annual electricity savings in excess of a quarter of a million dollars.

“Overall, our support around the entire project—and especially the ongoing service and maintenance role it continues to play—has allowed the Districts’ Palmdale facility to concentrate on its core business as a water treatment plant,” said Davis. “The fuel cell remains transparent to daily operations at the facility, with exception to the significant energy cost savings and reduced emissions it provides.”

As renewable energy consumption takes off, the opportunities to incorporate new technologies into electrical contracting will continue to grow and be supported in order to meet demand.

“It’s one facet of our company,” said DeMarco. “Has it led to other opportunities? Absolutely. It’s definitely opened a lot of doors for us.” EC

MCCLUNG, owner of Woodland Communications, is a construction writer from Iowa. She can be reached via e-mail at [email protected].