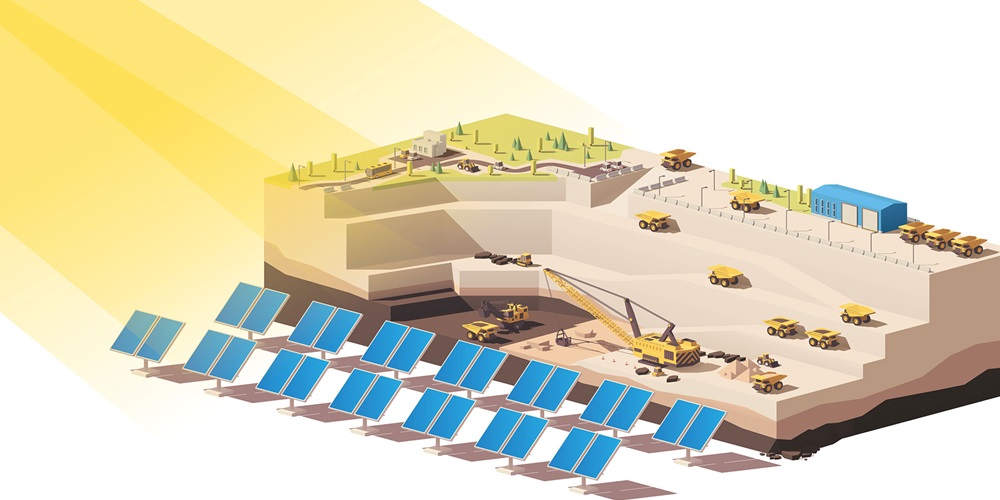 There is a change underway in a rural Washington State community that signals a new direction for clean-energy generation. The largest coal operation in the state is transitioning its open pit mines to a solar-generating system that will power communities previously dependent on fossil fuels. The Centralia, Wash., site—which consisted of four open-pit mines owned by PacifiCorp and the adjacent coal-fired Centralia Power Plant owned by TransAlta—is making the switch. Other companies are either watching this transition or planning their own with wind- or solar-power systems in the works.

In Centralia, the plant owner’s incentive was to meet future state mandates and remain financially viable. Because of the four pit mines’ increasing operation costs, TransAlta had stopped extracting coal there in 2006 and began receiving coal from Powder River Basin in Wyoming. However, the Washington site is converting to a 1,000-acre solar-power farm under the name of Tono Solar. The first solar power is expected from the site in 2020. In the meantime, TransAlta is in the process of closing the coal-fired power operations entirely.

Washington is one of a handful of states legislating a move toward reducing carbon-dioxide emissions; its aim is 1990 levels by next year. When burning coal, the Centralia power plant contributes 10 percent of the state’s total greenhouse gases, and that makes its conversion to solar a significant step toward meeting state goals.

Tono Solar won’t be able to generate as much power as the coal-fired plant did. It will provide about 180 megawatts (MW) rather than the 380 MW the coal plant supplied to Puget Sound Energy to power area homes and businesses. However, another renewable-energy farm, known as the Skookumchuck Wind Energy Project, is in the works, and it will produce another 140 MW from 38 wind turbines. When the two are combined, they will supply close to the same amount of energy as the coal plant.

For community job markets, replacing coal with renewable energy isn’t usually a gain. Tono Solar, for instance, will offer only about five permanent positions. However, about 300 construction jobs will be created for the Tono Solar project, many of which will be electrical.

This is all just one small part of a larger movement toward renewables, according to the U.S. Energy Information Administration (EIA). Jonathan Cogan, EIA spokesperson, pointed to the agency’s Today in Energy report, which finds electric-power sector consumption of fossil fuels has reached the lowest level since 1994. In 2017, coal consumption by the electric-power sector dropped at levels not seen since 1982, while natural gas consumption has increased.

In some cases, replacing fossil fuel plants with solar or wind accomplishes several goals. The aging fossil infrastructures often need to go anyway because they are no longer economically competitive, and the site can be repurposed to continue providing energy in a way that is scalable, lower cost and cleaner. That’s a double benefit for customers’ bills and for the air, land and water.

Long said he already sees activity in that direction. In the summer of 2018, Nevada’s Environmental Commission voted to make renewable energy and energy storage one of the officially acceptable uses for former mines.

In fact, the Reid Gardner Generating Station in Moapa, Nev., now uses solar power generated by units installed on the Moapa Indian Reservation. It received 200 MW from the solar units while it is closing down its coal-fired electric generation as part of an effort by NV Energy to divest itself from all coal-fired electricity.

The Public Service Co. of New Mexico is closing its San Juan coal-fired generation station. The mine is located at the generation site, making a replacement of solar power a viable alternative. However, such a conversion has not been planned yet.

In Kentucky, Berkeley Energy Group is in the early stages of building a large solar farm in Appalachian country, an area that has generations of history in coal. Instead of replacing existing coal production when it is exhausted, the company’s approach is to install solar farms on that land. For electrical contractors providing the labor for wind and solar projects, this means opportunity.

Still, Long doesn’t expect coal plant replacement to be the norm or the solution to energy costs and greenhouse gas emissions. Every plant and community has its own requirements. However, the transition is happening.

“I don’t want to be Pollyannaish that solar is the answer for every Western town,” he said. “It’s good for consumers and good for the environment. That should be one part of much broader diversification story.”

The drive is likely to accelerate in part from state legislation and utility companies. Washington has a long-term goal of 100 percent clean energy, while California has passed a similar bill. Hawaii and New York are moving in the same direction.

Independent of that effort are the power-generation companies themselves. Xcel Energy, for instance, has committed to 80 percent decarbonization by 2030 and aims for zero by 2050. Economics as well as concerns about the climate are driving these decisions.

In some cases, companies may also move toward hybrid approaches to help meet the needs of electricity generation throughout the day. For example, with regard to solar power, power generators face the issue of the “duck curve,” which essentially is the concept that solar-power generation peaks when demand is low. Energy storage is one way to address the problem, but a combined approach with fossil fuels can also serve as a solution to fluctuating demand that solar or wind alone might struggle to serve.

If nothing else is certain, Long seems to think this future of transition to renewable power technologies is inevitable.

“I think the broader transition is happening very quickly and will only increase in future years,” Long said.