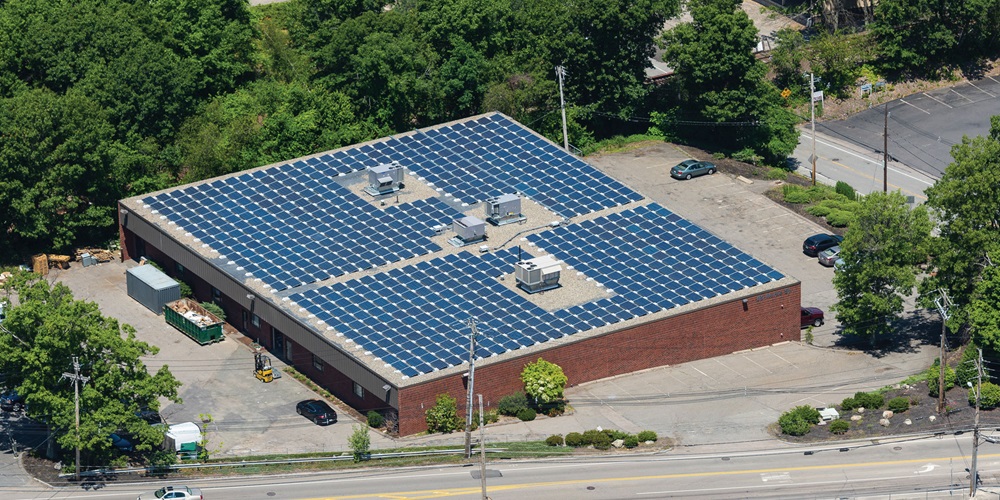 In March, Gaston Electrical Co.  Inc. installed a 175.8-kilowatt (kW) rooftop photovoltaic (PV) solar-power system on the roof of its headquarters in Norwood, Mass. The system eliminates 55 tons of carbon dioxide emissions from the atmosphere, according to a press release.

The contractor partnered with Solect Energy, the state’s leading installer of solar energy for businesses, on the project. Bill Weber, Jr., Gaston Electrical principal, and Brian Herr, Solect’s vice president of business development for the public sector and education, had previously worked together, so the partnership for this project happened naturally.

Solect Energy planned the PV system’s layout, while Gaston Electrical took on the installation and electrical work, according to Herr.

The installation of the PV system, which is made up of 676 panels, advances Gaston Electrical’s sustainable practices. It produced more than 92,000 kilowatt-hours (kWh) of solar energy on the flat, 22,000-square-foot roof. The roof presented a perfect opportunity for a PV system.

“This was a great opportunity to thrust ourselves into the solar market,” Weber said. “Installing the system was a chance to step outside of the norm of sustainable energy—a very obvious way to put our money where our mouth is. It really adds credibility.”

“Gaston differentiates themselves by going green in this manner. They can speak with direct experience to the cost-benefits and risks involved,” Solect’s Herr said. “They are ahead of the curve in the Norwood area.”

During the installation, some neighboring business owners came by to ask about the system.

“[The Norwood Electric Department] learned how to price these systems and tie them into the grid,” Weber said. “There are a lot of buildings similar to ours that are prime candidates for a system like this. I think there will be a handful of these systems going up in the next year in Norwood.”

“The savings are significant—not just from a financial standpoint, but also from a consumption standpoint,” Weber said. “We don’t have a full year of experience yet, but at 200,000 kWh, it has been a very productive summer.”

He said that Massachusetts has incentive programs that help make the financial burden of installing systems of this size more palatable.

Before installing the PV system, Gaston Electrical had already implemented environmental initiatives in its headquarters, including motion-activated lighting and other efficiency systems to conserve resources. Many of its projects involve sustainable initiatives in LEED-certified buildings, Weber said.