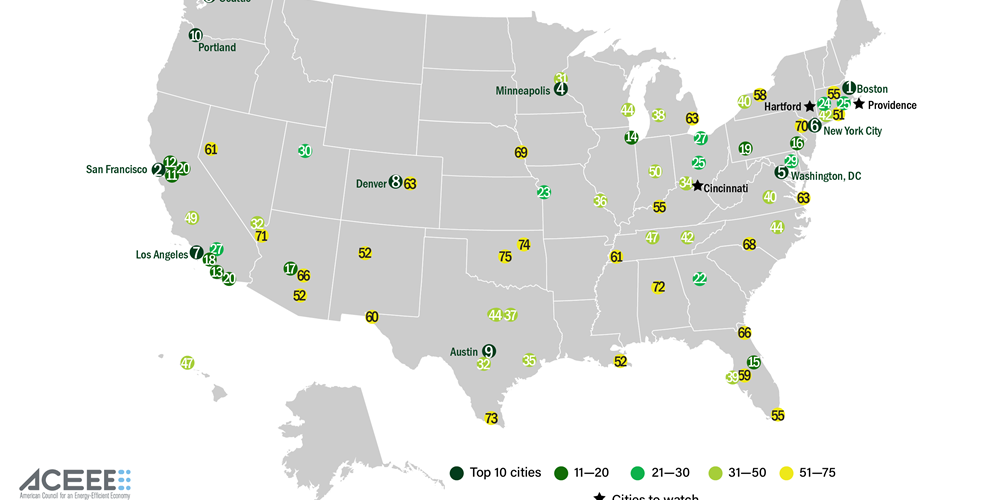 According to a new study by the American Council for an Energy Efficient Economy (ACEEE), U.S. cities are ramping up their clean-energy efforts, though less than half of surveyed cities with city-wide climate goals are on track to meet them.

Released in July, the 2019 City Clean Energy Scorecard ranks 75 large cities on what they are doing to save energy. The report shows cities are adopting stricter energy savings rules for buildings as well as policies to advance renewable power.

The cities undertook more than 265 initiatives to advance efficiency and renewable energy between January 2017 and April 2019. Policies vary widely according to their substance and effectiveness. From modest teleworking for public employees in Philadelphia, for example, to cutting-edge high-performance standards for existing buildings in Washington, D.C.

Based on a ranking that uses more than 50 metrics, the results place Boston at the top of the list with a ranking of 77.5 out of a possible 100 points. San Francisco, Seattle, Minneapolis, Washington, D.C., New York City, Los Angeles, Denver, Austin and Portland round out the top 10 in that order.

While cities are taking aggressive steps to combat climate change, few cities are tracking their progress, and fewer still are on a path to achieve their goals. For greenhouse gas reduction, 49 cities have community-wide climate goals. Of the 49, only 27 had data enabling the ACEEE to assess their progress, and only 11 are on track to meet them.