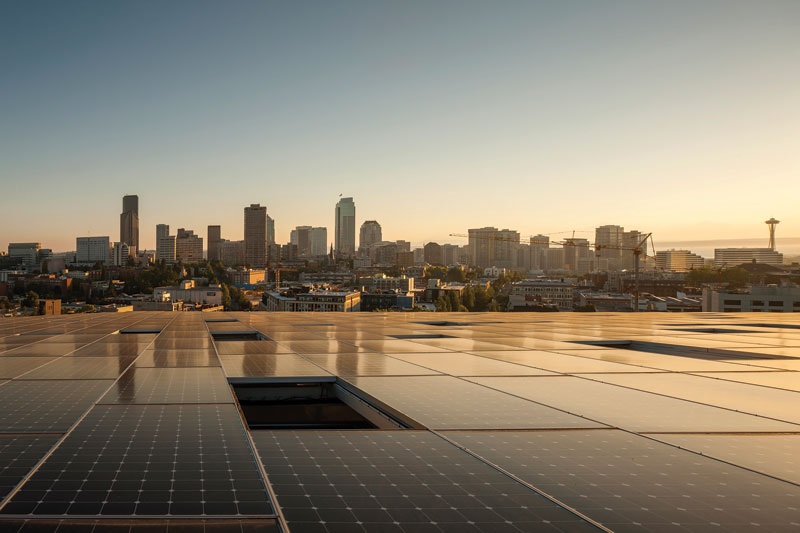 Today, some buildings can produce more energy than they use. Spurred by successful net-zero energy projects (also called zero-net), net-positive endeavors demonstrate the possibilities and potential in building design.

The small step from net-zero to net-positive could present a new world for buildings, public utilities and city planners.

Generated power from net-zero energy buildings can often spill over into net positive, then recede. When that surplus energy (typically provided by solar) becomes more common and is maintained, net positive can become a strategy for building owners and operators.

The state of net-zero energy

To best understand net-positive energy, it’s worth looking at net-zero energy today. The New Building Institute (NBI), Portland, Ore., biannually compiles a list of North American zero-net energy (ZNE) buildings. The 2016 list reveals nearly 400 buildings that either operate at net zero (53 certified), are being designed or currently operating but need to achieve a year’s worth of net-zero operation (279 emerging), or aspire to net-zero performance without pursuing net-zero certification (62 ultra-low-energy verified). Compiled in the NBI’s “2016 List of Zero Net Energy Buildings,” this count represents 75 percent growth from 2014.

While education remains the most common ZNE structure (K–12, higher and general education), offices make up a quarter of the ZNE list. Even hospitals and restaurants are “finding innovative ways to pursue ZNE” the NBI states. The report also found ZNE projects in nearly all states and parts of Canada, though California remains the busiest.

Joseph F. Clair is practice lead at DbHMS, an engineering firm with offices in Chicago; Grand Rapids, Mich.; Philadelphia; and abroad. He sees an increase in ZNE projects coming across desks in his firm and now more commonly introduces the concept to clients pursuing high-performance energy goals.

“If solar prices continue to fall and tariffs and solar-energy trades progress, solar may be completely market-competitive by 2020, allowing for some grants and rebates,” Clair said. “With that in place, net-zero can have its day. Today, we get there by reaching an approximate target of 25 EUI [energy use intensity]; and 23 to 32 kBtu [kilo-British thermal unit] per square foot per year. You are regulating a load that includes lighting, HVAC, plumbing, and other power systems. Advanced controls are critical.”

“We can construct a building in the future that is extremely efficient (advanced controls, heat pumps, natural ventilation, high-performance envelope, advanced lighting controls), making it 75 percent more efficient than average buildings,” he said. “Then you add solar. That’s a zero-energy building that is highly advanced. Net positive must generate 105 percent of the energy of what you use. Maybe half of our certified net-zero buildings are performing at net-positive levels.”

A tribute to reaching high

The Bullitt Center, located in Seattle’s Capitol Hill EcoDistrict, is the first six-story, net-zero office building and the largest office building to earn ILFI’s Living Building and Net Zero Energy Building Certification, including net-zero water. In operation since 2013, and reaching net-zero status on an annualized basis, the center has moved into net positive, producing in excess of 30 percent surplus energy.

“Our building was performing better than we modeled and crossed over into net positive,” said Justin Stenkamp, senior associate and mechanical engineer for PAE, the engineer of record.

PAE was responsible for mechanicals, electrical engineering, architectural lighting design, energy modeling and performance modeling. Based in Portland, its Seattle office is a tenant of the Bullitt Center, as is ILFI.

Performance features of the 52,000-gross-square-foot building include circuit-level metering; an EUI of 12 kBtu per square foot per year; rooftop solar and solar canopies producing 242 kilowatts/230,000 kilowatt-hours (kWh) per year; reduced plug loads by 78 percent; and 0.4 watts per square foot (half the Seattle code of 0.9 watts per square foot) accomplished through lighting controls, extensive natural lighting, LEDs, efficient fluorescent and other ambient lighting. HVAC costs are mitigated through a geothermal installation and controlled windows.

Tenants are responsible for meeting kilowatt-hour-per-year goals and receive money if targets are met. The building sends its excess energy back to the grid in an arrangement with Seattle City Light.

“We net meter the energy we produce and also have a power purchasing agreement with the utility for our roof’s 575 solar panels,” Stenkamp said.

Other PAE net-positive projects include the Rocky Mountain Institute Innovation Center in Basalt, Colo.; the NESTT Center at Eastern Washington University; and an in-design project for the Georgia Institute of Technology in Atlanta.

A deep dive into net positive

The electrical contractor is a vital component of net-zero and net-positive buildings. That’s clear to Brett Moss, training director at the Net Zero Plus Electrical Training Institute (NZP ETI), Commerce, Calif., a joint venture of the International Brotherhood of Electrical Workers Local No. 11 and Los Angeles County Chapter of the National Electrical Contractors Association (NECA). Operational since summer 2016, the 150,000-square-foot facility continues in its assessment period to achieve LEED Gold and ILFI’s net-zero certification. The building has been running net positive since January.

“We are 44 megawatts on the positive side,” Moss said. “Our lighting and HVAC loads were modeled to drop by more than 50 percent. We further tuned the building, dropping our HVAC load below projections and getting close with the lighting. It’s not uncommon to look at our dashboards and find plug loads carrying the largest load, which is really unique.”

Moss assesses building performance with the mechanical contractor, its California electrical contractors O’Bryant Electric (Chatsworth) and PDE Total Solutions (Santa Fe Springs), and Stok, based in San Francisco, which led the design of the project and served as project manager.

“If we miss performance goals, we look at the ‘whys’ and then make adjustments,” Moss said.

NZP ETI’s ambitions are to change the way buildings use, produce, store and monitor energy.

“We couldn’t have gotten this project done without highly qualified electrical contractors,” Moss said. “Net plus requires contractors to get themselves to the next level.”

“In our training, apprentices see net positive as a pretty easy process to understand,” Moss said. “Our apprentices have grown up in a world with technology. They get smart buildings and want to be part of the solution.”

NZP ETI is the largest net-zero energy, commercial retrofit in the United States.

“To keep a pulse on building performance, we gather readings from several hundred submeters that read every electrical load and plug,” said Warren Neilson, principal of Stok. “Each room is metered, so we can see in real time how each is performing through temperature, lights and occupancy.”

"We manage the battery-storage system based on the utility’s tariff rate and structure,” Neilson said. “The system understands the SCE’s tariff instruction and is programmed to communicate so the battery discharges at peak rates. Consequently, the building’s load can be reduced, and it avoids peak prices. If we are overproducing, we get paid a higher rate for that power to what we pay into the tariff.”

Stok has worked on 12 net-positive projects to date.

“We bring the building online in the morning using the utility’s central plant when the sun is far in the east and not offering much generation from our [photovoltaics],” Moss said. “To combat the demand charges, we decrease our energy use at that time including HVAC to reduce what the utility has to supply.”

NZP ETI is exploring how net positive can serve communities faced with natural disasters and emergencies. Its electric vehicle (EV) charging stations are both grid-to-vehicle and vehicle-to-grid.

“During times of major city emergencies like an earthquake, building tenant and student populations would likely be low, allowing us to operate on a much smaller energy footprint,” Moss said. “As a robust net-positive producer, we would likely be left with a tremendous amount of generation to recharge the EVs we deplete.”

Moss is working with Pennsylvania State University and its GridSTAR program (featured in ELECTRICAL CONTRACTOR in September 2015) to develop net-positive curriculum for NECA apprenticeship programs.

“Energy storage and microgrids may be part of the program, including different types of clean power generation beyond solar such as hydro or wind,” he said. “Net-positive won’t be a right-size-fits-all.”