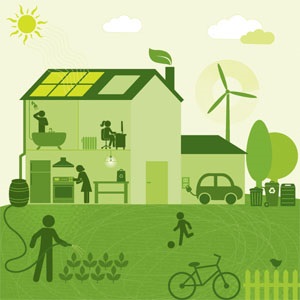 Despite the rhetoric, popular sentiment and public policies favoring green power, it may be surprising to realize that alternative-energy industries are still the underdog in the transformation of how we generate and consume power. The fact remains that nontraditional sources still face a Herculean task in their quest to capture U.S. market share and, in so doing, unseat fossil fuels as the primary source of energy.

Success can be measured along the way as renewables make progress toward overtaking fossil fuels.

According to data released recently by the U.S. Energy Information Administration (EIA), renewables usage is growing at a rapid pace, and in the process, their total share of national energy production is also expanding. The most recent issue of the EIA’s Monthly Energy Review reveals that renewables usage grew by 27.12 percent in the three years from Jan. 1, 2009, to Dec. 31, 2011. In contrast, total domestic energy production increased by only 6.72 percent. More specifically, natural gas and crude oil production grew by 13.66 percent and 14.27 percent, respectively. Nuclear power grew by only 1.99 percent, and coal dropped by 7.16 percent.

Regarding total share of production, renewables accounted for 11.74 percent of domestic energy production in 2011, an increase of almost 2 percent, from 9.85 percent in 2009.

Hydropower accounted for the largest share of renewables at 34.62 percent of domestic renewable production. However, other sources were adopted at a faster rate. Wind power was the fastest growing renewable power source during the three-year time frame, with an increase of 113.92 percent. The next fastest growing renewable sector was biofuels, which went up by 46.58 percent. Solar-power use expanded by 28.09 percent.

Looking just at the electricity sector, the numbers are even more compelling. Within that sector, nonhydro renewables usage grew by 54.6 percent.