Down to Earth About Grounding 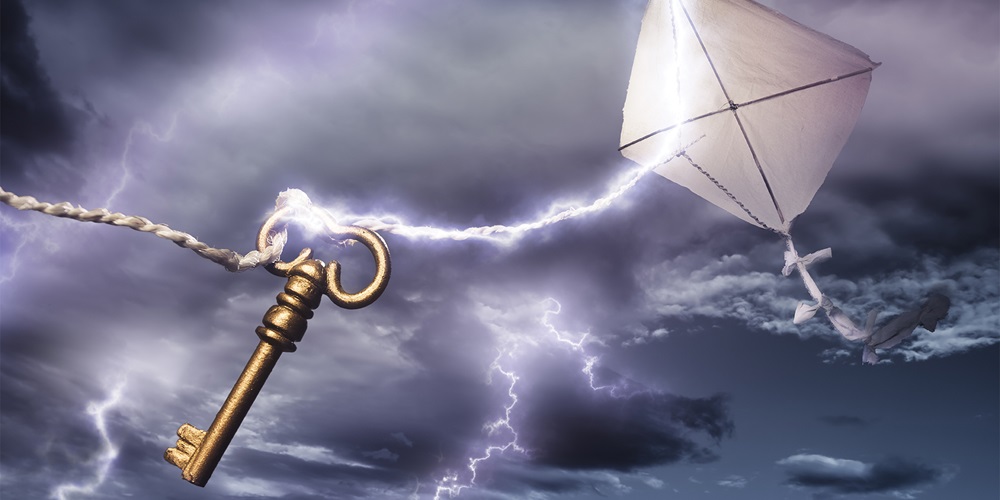 Ben Franklin already knew enough about grounding to keep the portion of the kite string he was holding dry. Otherwise when the lightning streaked down the wet part of the line and hit the key, he might have received more than a mild shcok when he moved his hand near the key. Legend has it that the experience was striking enough to send him indoors where he set about inventing the lightning rod.

Fast-forwarding a few centuries, grounded electrical systems are now the norm throughout most of the world, although some European countries operate ungrounded systems, which are monitored to identify faults if they occur.

But despite the fact that grounding and bonding are virtually universal in the industry, it would be a serious mistake for electrical contractors to consider the two disciplines pro forma and think it is just a matter of driving in a ground rod and tying it off to a cold water pipe. If not implemented properly, the result can be serious personal injury and costly property damage, not to mention the inevitable litigation that would follow.

And it’s worth noting that, at the beginning of the first chapter of the third edition of “Soares’ Grounding Electrical Distribution Systems for Safety,” the editor states, “The subject of grounding has always been confusing to many and precipitates much interest whenever discussions are held on the Code.”

So perhaps it would be best to start this brief discussion with the basic definitions of grounding and bonding as they appear in the National Electrical Code (NEC):

• Grounding: A conducting connection between an electrical circuit or equipment and the earth or to some conducting body that serves in place of the earth.

• Bonding: The permanent joining of metallic parts to form an electrically conductive path that will ensure electrical continuity and the capacity to conduct safely any current likely to be imposed.

That sounds rather straightforward; however, there are more complexities involved here than one might think, so it is important to know where to look for guidance.

The importance of Article 250

Industry experts agree that Article 250 in the NEC is the quintessential and primary source for information on grounding and bonding, but they also warn that this is not casual reading.

Johnston chaired NEC Panel 5 on grounding and bonding in separate buildings in 2011, having served on that panel for the Code’s previous three cycles, and he is the author of the National Joint Apprenticeship and Training Committee (NJATC) curriculum text on the subject “Applied Grounding and Bonding.”

He noted that the contractor has to grasp the big picture of what his grounding responsibilities are.

“Once service is delivered to a building, he has to ground it and bond it and know exactly what rules apply and how the installation is supposed to perform. This is always quite a challenge because it involves equipment grounding and bonding throughout the distribution system all the way to the final outlet,” Johnston said.

He also noted that probably the biggest problem ECs have is misapplying the NEC rules because they misuse the terminology.

“Too often, in their initial thinking and planning processes and in their prejob discussions with building owners and architects, they don’t use grounding terms correctly,” he said. “You can’t overestimate the importance of using the proper terminology. There has to be accurate communication, and if the contractor uses the Code terms properly and understands their definitions, then he’ll be accurate in applying the NEC rules to installations and systems.

“For example, you wouldn’t use the term ‘grounding conductor’ to establish sizing requirements for a grounding electrode conductor or a system bonding conductor. All of these are precisely defined terms with specific sizing rules.”

The risks involved in improper installation due to misuse of terminology run high. If, for example, there is an undersized equipment grounding conductor and a fault occurs in the system, then instead of the overcurrent device opening, the conductor opens since it has melted in half because it was undersized. Or, if metal parts are left ungrounded and there is a fault, those parts are energized and become a serious shock hazard.

While Article 250 remains the bible of grounding, electrical contractors would do well to avail themselves of some other industry sources on the subject of grounding and bonding.

“Besides the Code, there are other standards and publications that explore this subject from various perspectives,” said Thomas Glavinich, professor of civil, environmental, and architectural engineering at the University of Kansas. “Two areas that deserve consideration are specific grounding requirements for individual types of sensitive electronic equipment in a building and requirements outside the service point. The latter has become more and more important for contractors since many are now getting involved in multibuilding project sites that have to be interconnected properly.”

Glavinich said that contractors should be aware of the Institute of Electrical and Electronics Engineers (IEEE) series of “Color Books,” two of which deal with grounding and bonding. The Green Book is titled “Recommended Practice for Grounding of Industrial and Commercial Power Systems,” while the Emerald Book covers “Recommended Practice for Powering and Grounding Electronic Equipment.” Glavinich said the Emerald Book is especially helpful for providing overall background information about grounding sensitive electrical equipment. Then, because there are many types of this equipment with differing grounding requirements, the contractor has to be careful to follow each manufacturer’s specific instructions.

IEEE also publishes the National Electrical Safety Code (NESC), or ANSI Standard C2, which deals with outdoor installation beyond the point of service—that is, outside the purview of the NEC and including overhead and underground lines and communications connections.

An extremely useful interpretive text on this code is available from McGraw-Hill: “National Electrical Safety Code 2012 Handbook” by David J. Marne, an annotated commentary on the code itself, clarifying points that may be confusing to the reader. Some 30 pages are devoted to various aspects of outdoor grounding.

As the scope of the electrical contractor’s work has expanded over recent years, there is no longer any such thing as “one type of grounding and bonding fits all.” Involvement with more sensitive electronic equipment and outdoor work in multibuilding complexes are prime examples.

Due to the complicated nature of the various grounding and bonding concepts, contractors would do well to take the time to review the various source materials available and periodically have their people take refresher courses on the subject.

“From my experience in doing grounding and bonding training,” Johnston said, “I know that this material has to be thoroughly understood and needs to be reinforced periodically because of its complexity.”