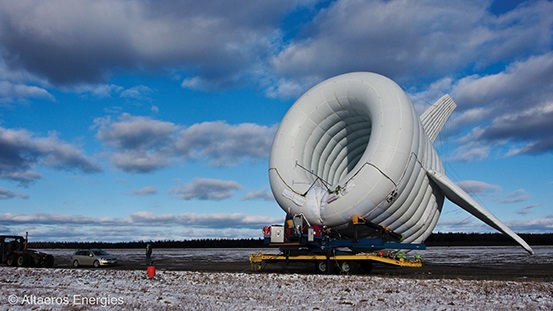 Later this year, Alaska will host the world’s highest-flying electric generator called a buoyant airborne turbine (BAT), which will float 1,000 feet above ground, mounted inside an inflatable, helium-filled ring. The wind turbine suspended inside the ring will be nearly 300 feet higher than the highest conventional wind tower.

Altaeros Energies—a Boston company founded in 2010 by the Massachusetts Institute of Technology (MIT) graduates who developed the BAT—plans to launch the 1,000-foot-high floating wind turbine near Fairbanks to bring affordable power to a remote Alaskan community. The estimated cost to produce power with the BAT will be approximately $0.18 per kilowatt-hour, about half the price of current off-grid Alaskan electricity.

The BAT has a power capacity of 30 kilowatts and will create enough energy to power about 12 homes.

Researchers have been developing floating wind turbines for years, but the 18-month-long project in Alaska will be the first longer term, commercial test project.

The technology can be deployed in less than 24 hours because it uses high-strength tethers mounted to a mobile platform that hold the BAT steady and allow the electricity to be sent back to the ground. Three winches independently control three tethers, one electromechanical and two structural. The power is transmitted as medium-voltage direct current from the turbine down the electromechanical tether.

Altaeros has tested its BAT prototype in 70-kilometer-per-hour winds. Since it uses the same technology as other industrial blimps that are rated to withstand hurricane-level winds, it might be able to withstand stronger gusts.

According to Altaeros, there is a $17 billion remote power and microgrid market that could benefit from the technology. Many off-grid sites, including small islands and villages, mining sites, military bases and disaster zones, rely on expensive diesel generators to provide some or all of their power needs.