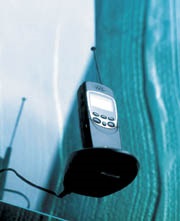 It’s nonsense that electrical contractors, traditionally a cable-and-wire bound profession, can do without wireless. It is a solution that has become reliable and super-flexible, and is an excellent way to put systems and services in those facilities where running wire, conduit or cabling is impossible.

One of the more recent innovations to emerge is a networking trend called machine-to-machine or M2M, which allows machines to talk to each other thousands of miles apart. Widespread availability of inexpensive computer chips and wireless phone networks makes it possible. The focus is on commercial machines, but eventually the system will enable managers to program systems over secured Internet sites so that, for example, a facility can be opened at a specific time without requiring a person to be present.

Cellular telephones, chips and radio tags are tracking everything from people to clothing. In some states, toll collection authorities have instated radio transmitters that allow users to ride through tollbooths rather than stop. Retailers are investigating using smart radio tags to trace goods from the warehouse to store shelves. Many cars are equipped with global positioning devices, and wearable devices are on the horizon. Wireless carriers are also looking at providing services that would sell products to cell-phone users based on their location and notify them of nearby sales. Finally, the trend to implant radio frequency chips has migrated from pets to human testing and deployment as well.

“This technology provides flexibility and greater applicability of access control for the installer and the end-user,” said Stark. “The 13.56 MHz RFID solutions allow the security manager more control over their systems, with user-programmability and the ability to segment memory for multi-applications.” This, she added, provides the market new levels of facility protection, asset tracking and increased security and authentication. In addition, end-users can tie in existing systems, as cards can be encoded and encrypted to support universal Wiegand formats and RS-232 and RS-485 communications protocols.

Texas Instruments is also looking at a migration to the ISO 14443 standard for emerging stored-value and wireless payment applications, another 13.56 MHz solution.

The innovation in wireless continues, especially in video systems. Camera-maker Toshiba Imaging Systems, Irvine, Calif., has a wireless (Wi-Fi, 802.11b) network camera that can be used to remotely view live, high-resolution (1280 x 960) video with audio from anywhere in the world via the Internet using a standard Web browser.

According to Doug Freck, vice president/general manager, the introduction of the unit is part of an aggressive campaign by Toshiba into the wireless local area network (LAN) market, an effort piggybacked off the launch of a wireless server.

Wireless in the spotlight

“Research indicates that while remote video monitoring over the Internet is currently a small segment of the overall wireless LAN market, demand for networked cameras such as the IK-WB11 will grow exponentially as an increasing number of homes, schools and enterprises discover the benefits of wireless networking,” Freck noted. “For example, 40 percent of the 850,000 new homes to be built in 2004 in the United States will have networks installed in them, many with wireless capabilities.”

“Wireless networking technology enables users to install network video products in areas where Ethernet cabling is not readily available, such as on bridges, in parking lots or across multi-building sites for same-day operation,” said Kevin Duffy, vice president and general manager of Proxim’s WAN Division. “In addition, sending images via WWAN makes it possible for large facilities covering numerous acres or sites to quickly deploy an advanced IP-surveillance solution.”

For the hands-on security personnel, or those who need constant and instant access to video, MicroOptical Corp., Westwood, Mass., introduced a color eyewear system using Bluetooth wireless technology. It offers hands-free and heads-up viewing of transmitted images. Bluetooth wireless technology is a worldwide specification for a small-form factor, low-cost radio solution that provides links between mobile computers, mobile phones, other portable handheld devices and connectivity to the Internet. The specification is developed, published and promoted by the Bluetooth Special Interest Group.

Wireless doesn’t involve video only. There are a host of wireless sensors for intrusion detection, as well as wireless access control. Taking access control even further into the realm of wireless application is a new biometric fingerprint reader called WINGER from IFKEY, Seoul, South Korea. It features a fingerprint identification key which encrypts and transmits fingerprint data using Bluetooth technology.

With the vast array of new products and services available in this market, there’s nothing you can’t do without wires. EC

O’MARA is the president of DLO Communications in Park Ridge, Ill., specializing in low-voltage. She can be reached at 847.384.1916 or [email protected].