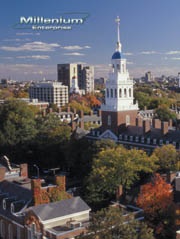 Northwestern University is among the most respected schools in the country when it comes to academics. So it made sense that state-of-the-art access control and security would be part of its campus. And while the security system project at Northwestern University’s new Benjamin W. Slivka Residence Hall was not a covert job, much of the work did have to be done quietly, because of the studious nature of the population.

“We had to be quiet every day until 8 a.m.,” said David Prokop, senior project manager for IJLCo. That can be difficult for a contractor. In addition, they had to keep quiet the week before exams and during examinations.

It is little things like that which make a job interesting and memorable. The $1.5 million project was part of a new 60,000-square-foot residence hall. The project was started in July 2001 and completed the following August, just in time for the start of classes in September.

In addition to the quiet times, there was also the challenge of working between existing dormitories.

The building is constructed of precast material with a 2-inch concrete topping on four floors. In addition to the usual clusters of dorm rooms, study areas, a lounge and the likes, the Slivka Residence Hall features a basement, an elevator and a deli-style kitchen.

“What we were doing was pretty complex,” said Sue Budinsky, project manager in Northwestern’s facilities management department. “I think Livingston did a good job considering all the things we were trying to do.”

Slivka houses 137 men and women in single- and double-occupancy rooms. Men and women live in 19 separate self-contained suites of singles and doubles.

The heart of the security system is Kaba’s Millenium enterprise online access control system featuring Marlok key and reader technology. “Kaba’s Marlok keys and readers are in our specifications,” Budinsky said. In addition, the contract called for installation of a Siemens Pyrotronic addressable fire alarm and about 150,000 feet of Belden Category 5E 350 Data Twist cable. Panduit terminations were used to bring connectivity to about 475 locations in the building.

Northwestern University is a private school with about 13,000 students. It was founded in 1851 to serve the old Northwest Territory, an area that includes Ohio, Indiana, Illinois and Michigan. The school now has two campuses, the 240-acre site in Evanston where this job was done, and a 25-acre campus in Chicago.

The Millenium Enterprise system and the computers that control it, is a complex setup. The Marlok keys from the Winston-Salem, N.C., firm resemble typical brass keys, but they actually are complex electronic sensors. Whenever a key is used, the central system keeps track of when and with which key a person entered each and every door in the building. This includes exterior doors, elevator doors and doors to dorm room suites. This type of tracking provides a host of management and information functions in a large campus facility.

“The system requires a programmed key entry rather than the traditional card access reader,” Prokop said.

“That requires rough-in in the door frame and wiring through a pre-wired hinge to allow the wiring to extend to the lock set,” he continued. Once a Marlok key is inserted and read by the software-based Millenium system, the person can be approved for entry. At this point, the system allows an electric strike (which also requires door-frame rough-in) to unlock the lockset. A dedicated door-control device is required and can be programmed for each type of reader.

But not all of the doors were that simple. “The requirement at the handicapped doors included a wall-mounted proximity reader and an interface with the handicapped power-door operating controls,” Prokop explained.

“There were kinks to work out,” said Budinsky. “We were combining several different types of door access combinations.” Physically challenged students, for example, are given a special device—not the typical key—that allows a proximity reader to approve or deny the student’s presence at this type of door.

“This system also applied to the elevator,” Prokop continued. Only selected floors have handicapped proximity readers and the elevators at those floors were equipped with a proximity reader. “Coordination with door types, access requirements, door hardware and traffic was a real challenge,” he added.

Budinsky appreciated the difficulty of combining the proximity card reader, the Marlok and housekeeping keys, all centrally controlled by the Millenium Enterprise software. “In addition to the card swipes there were multiple systems at different doors. Wiring was a learn-as-you-go process,” she said. However, the final result was just what they were after.

The crew at work

During the rough-in stage, IJLCo typically had a crew of five to eight of its own electricians on site. Once IJLCo provided the rough-in, NECA member firm Advent Systems Inc. of Elmhurst, Ill., took over the task of voice/data wiring, terminations and testing, installation of the security access controls and rigging the sound system in the lounge.

Advent, and Local 134 IBEW members, had worked on several Millenium installations using Marlok components with IJLCo in the previous year, so they had a good idea of what to expect. Of course, no job is ever just as you imagine.

“It was an experience working with the lock hardware,” recalled Bob Gasper, senior project manager for Advent. “For a relatively small building, there were 40 or 50 readers. So it was a complex installation.”

In addition, there were a number of delayed-egress doors to deal with.

“After rough-in, the crew would vary from six to eight men to trim wire, hang fixtures and wire the fire alarm system. Another two to four men would pull the Category 5 wiring to the dorm rooms, with an additional two Advent men pulling wire and installing the door access system,” Prokop said.

The general contractor on the project was Novak Construction Co. of Chicago. Steven Convery was general foreman and Kevin Shaw was the foreman.

While the “quiet times” made the job interesting, there were some practical considerations that increased the degree of difficulty. Advent was fortunate that they did not have to deal with the quiet rules since they got involved after school let out. But all the players mentioned that the first challenge on everyone’s list at a project of this size is coordinating all of the work.

“We had regular weekly meetings with the general contractor coordinating,” Prokop said. “The greatest coordination challenge was the access control system,” he continued.

Here, two different approaches were suggested. Prokop would have preferred a meeting of all parties involved: architect/engineer, owner, Northwestern lock shop foreman—(who is an expert with Marlok systems), the elevator contractor, Advent and himself to review the entire project.

In the end, however, the general contractor required that all questions be submitted in a written RFI (request for information) form to be interpreted and answered through the architect/engineer.

While working around the precast was not a problem, Gasper would have liked to see some changes in the riser diagrams.

Electrically, there was the practical consideration of concealing all of the conduits in the concrete topping over the precast planks.

“Coordination with the handicapped doors was a bit confusing,” Advent’s Gasper said. The general contractor had purchased the hardware without any installation.

“Wiring the elevator was a hassle, but it was mostly a matter of getting the right people there to sort things out,” Gasper continued. Since the days of elevators with relay logic are gone, there was a need to get the digital logic for the elevators to function correctly. But eventually, all the bugs were worked out.

Prokop said many of the little hiccups were due to the need to deal with “layout of the different systems.” Yet, everyone pulled together and the challenges were met.

The system has performed well for Northwestern and its students. Students appreciate the system installed for their safety. If they do not know how much technology is behind it at first, they find out soon enough if they lose a key. Since standard mechanical key locks are used in the individual dorm rooms, students are charged $125 if they lose a room key. This is because the entire lock must be changed. The charge for replacing a lost front door or security door Marlok key is $25.

Northwestern University is serious about security and life safety issues. The No. 1 reason in the student handbook for dismissal upon first offense is “tampering with fire safety equipment (alarms, extinguishers, etc.).” The second reason involves guns, and the third admonishes against “tampering with the security system—denying exit or entry from a student room, taping locks, or propping open doors.”

The Millenium Enterprise/Marlok key access control system is now in use in a variety of buildings, ranging from the engineering center to the music practice building.

Today, when he drives past the college, Prokop admits he feels proud of the job. “Northwestern University received a quality and on-time installation,” he said. He says it quietly ... in case someone happens to be studying. EC