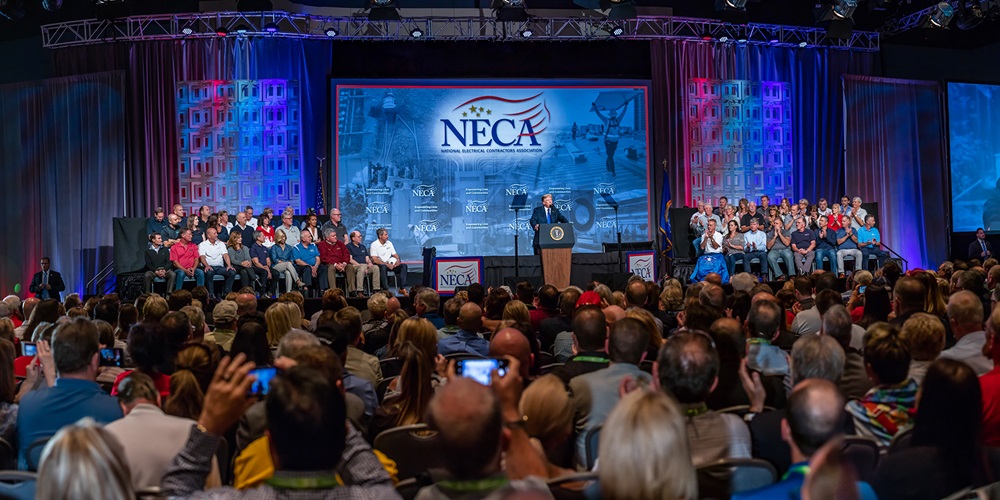 For the first time in its history, the NECA Show hosted a sitting president. On Tuesday, Oct. 2, U.S. President Donald Trump addressed the closing general session at NECA 2018 in Philadelphia. In his speech, Trump spoke about his administration’s agenda and policies, jobs, and the economy, and he credited organizations such as NECA with making strides in workforce development.

NECA President David Long welcomed the audience to the terrace ballroom of the Pennsylvania Convention Center and spoke about the convention’s success. He then introduced Trump. As Trump approached the podium, Long presented a custom hardhat with the Seal of the President of the United States on the front.

“I don’t want to put it on because I’m afraid it’ll mess up my hair,” Trump said. He then put the hardhat on.

He complimented ECs on the quality of their work and the difficulty of their tasks.

“With your help, we will protect this noble trade for many generations to come,” he said.

Trump delivered an address to the audience that summarized his administration’s agenda and achievements, touching on the economy, trade, U.S. manufacturing, military spending and more. He alluded to future plans that are in the works, such as further boosts to manufacturing jobs and trade deals with South Korea and Japan.

After highlighting these political points, Trump turned the focus to two electrical contractors and one apprentice. He first invited Stacy Wilson of Wilson Construction Co. (Canby, Ore.) up to the stage. Wilson Construction is a family-owned, nationwide company specializing in transmission, distribution and substation projects. Wilson discussed her company’s history and its success. Now with a workforce of more than 500 people, Wilson said her company has been able to invest more in itself and its employees.

“We are looking to grow 30 to 40 percent more in employees in just the next few months,” she said.

Trump then invited Steve Gianotti of Arcadia Electrical Co. (Ridgewood, N.Y.) up to the stage. Gianotti said he’s been able to bid on more work and take on more jobs recently.

“We have been able to keep our 120 people employed, but, next year, we anticipate hiring 25 percent more," he said.

Finally, Trump invited Leam Nicholaides, apprentice with Local No. 98 and member of the Pennsylvania Air National Guard, up to the stage. Nicholaides spoke about his apprenticeship and said, even though he might have to deploy regularly, Local No. 98 invested in him.

“I was able to deploy for three months, a short deployment, and, upon my return, I was able get pushed right back into the education program with Local 98,” Nicholaides said.

Trump closed out his speech with a dedication to electrical contractors.

“I want to thank you to everyone here today for your investment in America’s future and for your devotion to the American worker. So important. Hard-working citizens like you have always been the backbone of our nation, and you will always be the most important factor in our nation. You make it grow. You make it work,” he said.

Trump’s visit to the NECA Show comes after NECA executives met with the president in Tampa Bay, Fla. for the Pledge to America’s Workers. At the meeting in July, NECA committed to help add 60,000 jobs to the electrical construction industry over the next five years.

“As NECA works toward growing the electrical construction industry, we are fully committed to meeting President Trump’s goal by pledging to create career opportunities for 60,000 American workers over the next five years,” said NECA President David Long.