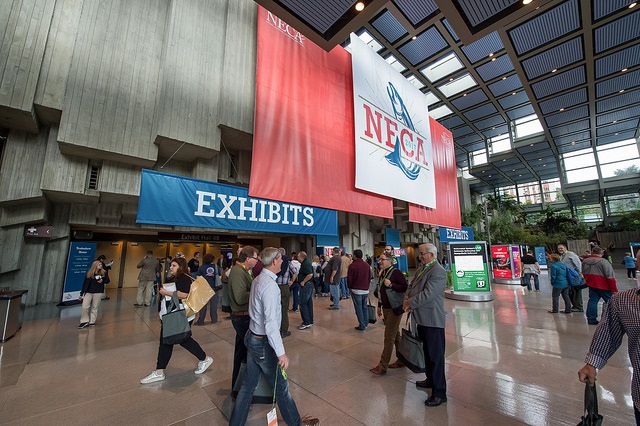 The NECA Show is the biggest trade show and convention in the electrical construction industry. Each year, thousands of contractors and hundreds of exhibitors descend on a choice city, and this year, it was in Seattle.

If you've never been to a NECA Show, you might not know what it's about. The convention is three days long, but the exhibitor floor is only one part of the show. Before the convention, there is a vast array of preconvention workshops and events, such as NECA's Green Energy Challenge, a Student Chapter job fair, a safety roundtable, and the opening reception. When the show begins in earnest, attendees roam an exhibition floor with more than 300 exhibitors, free technical workshops, live presentations at the new Techtopia and Presentation Theater, the Showstoppers Showcase, and more.

On Saturday, Oct. 7, the NECA Show kicked off with a reception at the Museum of Popular Culture, formerly the Experience Music Project. In this building designed by Frank Gehry, hundreds of electrical contractors and associated personnel roamed the exhibits, listened to the musical stylings of the Milwaukee Tool Shed Band, or imbibed with great food and drink to party the night away and celebrate the opening of another show.

The first day of the NECA Show opened with a general session featuring Amy Purdy. When Purdy was 19, she contracted meningococcal meningitis and was given only a 2 percent chance of surviving. She lost the hearing in one ear, her spleen, and both of her legs below her knees, but she lived, and she came to understand it was a transformative experience that presented opportunities to her. Read more about her extraordinary life and speech here.

From there, the exhibition floor opened with more than 300 exhibitors spread across two of the Washington Convention Center's exhibition spaces. After the general session, attendees flooded the halls and wove through the exhibitor booths to learn about the new product innovations and what to expect from electrical product manufacturers over the next year.

If it's products news you're looking for, our independent panel of judges selected the 2017 Showstoppers on the first day. Full details will be in our January issue, but click here for the list of winners and images from the awards ceremony. With almost 200 entries, the competition was fierce, but the winners all demonstrate key innovations electrical contractors are sure to appreciate.

On the first day, we also got a chance to check out Techtopia, a new feature of the NECA Show where contractors can learn about the latest in state-of-the-art technology. A highlight of this area of the show floor was the drone cage, an enclosed space for drones to soar so attendees could see them in flight.

In between booth meetings, we also rushed to check out some of the technical workshops. These free classes on the show floor touched on everything from adopting digital technology to safety issues to alternative energies to training. The list goes on, but it's composed of the most important topics in electrical construction today.

Day two opened with a general session with Jim Donald, former Starbucks CEO and successful businessman. Jim's main message to contractors was to never be bigger than the front line—i.e., make sure you get to know your employees on your front lines, their needs, and the challenges they face. Read more about Jim Donald's presentation here.

After the general session, we attacked the show floor again, trying to cover as much ground as possible. On this day, we were able to check out the new Presentation Theater, featuring "TED Talk-like" presentations from exhibitors on various topics. They were well attended.

Finally, on day three, we faced the realization that there was just too much, but we did our best to get around to everyone. All things considered, we saw some amazing innovations that we'll be talking about in the next 12 issues and here on ECmag.com.

To close the show proper, Ben Saunders, polar explorer, addressed the final general session with his inspiring story of completing the longest arctic expedition on foot to the South Pole and back. How does this relate to electrical contracting? It's not obvious like Jim Donald's experiences, but Ben Saunders' feat certainly involved struggles physical as well as mental and emotional. To complete the journey, he and his partner had to use exceptional teamwork to overcome monstrous challenges and solve unique problems. Contractors can learn from this spirit. Read more about his presentation here.

All three general session speakers were fascinating in their own rights, and together, they spun a theme of creative problem solving, self awareness and perseverance as fundamental traits to success.

And then it was time to say goodbye to Seattle. It saddened us that it was over, but NECA 2017 had one more event in store to leave us on a high note. Huey Lewis and the News played the closing reception, and those 80s hits were just the note to go out on as we embarked on the return trip home.

Next year, the NECA Show will be in Philadelphia. Stay tuned to ELECTRICAL CONTRACTOR for more info on the events that will be in store as well as when registration opens. Follow us on Facebook and Twitter, or join our e-newsletter mailing list. Or, if you're old-fashioned like most of our readers (and editors), subscribe to the print issue if you don't already get it.

For ELECTRICAL CONTRACTOR, the NECA Show isn't an end. It's a beginning. It's the most important trade show that we attend every year in terms of informing our editorial content. We learned so much from NECA 2017 that we're just not even sure we'll fit it all into the next 12 issues. We'll find a way, though. We always do.