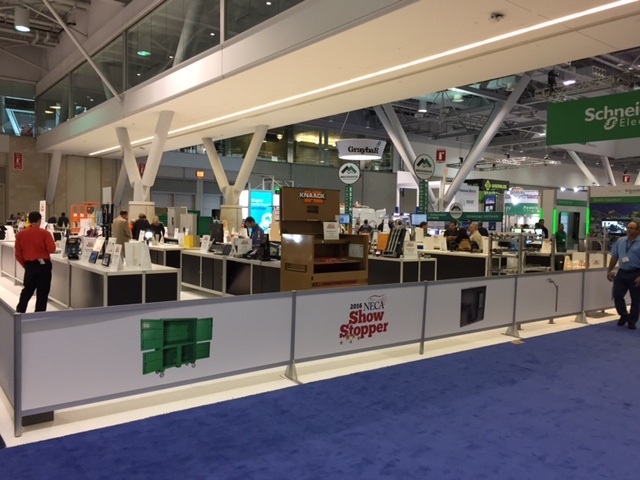 As with any trade show, everything at NECA 2016 Boston revolves around the show floor. For several hours every day, hundreds of industry figures have taken to the Boston Convention and Exposition Center to explore the latest products and services that the largest brands have to offer. However, sometimes it pays to go off the beaten path and explore what is going on around the edges.

This year, the staff at ELECTRICAL CONTRACTOR has had the opportunity to look a bit closer at other aspects of the NECA Trade Show and Convention. In the days before the show floor opened, various preconvention workshops were held, and attendees spent an entire morning or afternoon digging deep into an important industry topic. Of particular note was the workshop “2017 NEC Significant Changes,” presented by ELECTRICAL CONTRACTOR Code columnists Michael Johnston and James Dollard, and Palmer Hickman of the Electrical Training Alliance.

The education continues through the entire convention, and attendees have the opportunity to see what the experts have to say about some of the hottest topics in the industry. On Sunday morning, hours before the show floor opened at 11:30, ELECTRICAL CONTRACTOR had the opportunity to observe “How to Identify and Develop Hidden Talent,” a talk by Nic Bittle of Work Force Pro. In his one-hour session, Bittle touched on a major challenge facing today’s electrical contractors: finding the next generation of industry leaders. He stressed on the importance of identifying this talent early on, since a good number of today’s leaders will be retiring in the coming years.

After consuming all this information both before and in the hours before the convention, attendees finally have the opportunity to hit the always-daunting show floor. Of course, if there’s one thing you think of when you imagine a convention such as NECA 2016 Boston, it’s products. Within seconds of entering the convention center, you immediately hear the sound of tool demonstrations, the glow of the latest high-tech LEDs, and signs hanging from the ceiling with the logos of brands ECs already know very well.

However, at the front and center of the show floor is one of the most interesting displays at NECA 2016 Boston: the products that competed for this year’s Showstopper awards. Sponsored by ELECTRICAL CONTRACTOR, the Showstopper Showcase spotlights some of the latest innovations by both the biggest names in tools and products and some companies that are just getting started. Among the entries, 20 products were chosen as Showstopper award winners.

For that reason, ELECTRICAL CONTRACTOR spent much of Sunday handing these awards out to the lucky winners. Every year, this is one of the most fun parts of the show, as awards are given to both familiar faces and exciting newcomers. Sometimes the award was given to a large team, other times there was just one person there to accept. However, no matter how many people are involved, these manufacturers are able to leave Boston knowing their product will be a welcome addition to the marketplace.

Walking around the Showstopper Showcase itself, one is amazed by the vast diversity of entries. In this section, the products range in size from large cabinets to your standard-sized roll of measuring tape. It helps you appreciate all the tools and equipment ECs need to get the job done, and it’s an indication that the industry will continue to move itself forward.

Speaking of tools, we were excited to run into Warren Tarbell, an inventor we met last year in San Francisco. He is the man behind the VoltClaw tool, and his creation helped inspire the article “How They Were Made,” available in the October issue of ELECTRICAL CONTRACTOR, which we distributed at the show hot off the press but will be delivered to subscribers in the next week or so. He’s an example of the kind of relationship that can be formed at the NECA Trade Show and Convention, and how these chance encounters and lead to new and exciting partnerships. We look forward to seeing Warren again next year, and seeing how his still-young business is coming along.

There are always two sides to events such as NECA 2016 Boston: the business side and the personal side. The former may be the main focus of making the trip, but it’s the latter that will stick long after the show floor lights have gone out.