The Law of Unconscionability 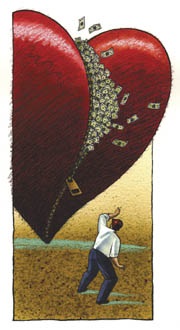 At its heart, unconscionability is equivalent to unscrupulous conduct, but this area of the law is generally uncharted waters. Can we come up with a helpful definition? In one case, a contractor garnered huge profits on a government job. When the government realized what had happened, it sued to recoup some of those “excess” profits. The court ruled:

“The profits made in these and other contracts entered into under the same system may arouse indignation. But indignation based on notions of morality cannot be justly transmitted into a principle of law.”

What about abusive terms in a contract? I recently saw an egregious “no damages for delay clause.” The clause excused the general contractor not only from delay damages claimed by the subcontractor, but also from damages caused by the general contractor’s work and even if the contractor was negligent! This wording and concept is absurd. However, it has been ruled that “Failure to read the terms of a contract cannot be used as a defense to the consequences of such an omission.”

There are literally hundreds of state and federal statutes that address unconscionable contracts and practices, such as insider trading, usury, consumer fraud, home improvement contracting, etc. There are laws prohibiting unfair practices in these and many other areas of business.

The Uniform Commercial Code (UCC), which has been adopted throughout the United States, has also tried to tackle the problem of overreaching in a contract. The results are fairly unpredictable as the concept concerns morality. Every judge has his/her own take on that matter.

A good example is an important consumer case that was decided by the United States Supreme Court. A woman bought a trailer home. Her contract of sale required that any disputes she had with the seller be decided in arbitration. That arbitration clause was specifically enforceable under both the Federal Arbitration Act and the Uniform Arbitration Act (state law).

Apparently the trailer was not up to par, so the buyer sued the seller for millions of dollars for fraud, misrepresentation and breach of contract. The seller correctly asked for a stay of court proceedings while the dispute was heard in arbitration. The buyer objected, arguing that the fees to arbitrate were higher than she could afford.

This matter went all the way to the Supreme Court for our highest court to decide whether the arbitration fees, which are set by the amount of damages claimed, were so unaffordable that the buyer was denied justice. In a split decision, the court upheld the arbitration clause.

As I have discussed in prior articles, the UCC applies only to the sale of goods, not service (construction) contracts. However, the courts have regularly referred to the UCC in deciding construction cases because of its thoroughness and erudition.

Section 3-302, however, is somewhat unique. It is a direction to the court that it has flexibility (notice the number of times the word “may” appears) when it finds that the contract was formed through oppression, one-sidedness or where the application of a clause involves unfair surprise.

In the official commentary to this code section, superior bargaining power is not a basis for a claim.

“The basic test is whether, in the light of the general commercial background and commercial needs of the particular trade or case, the clauses involved are so one-sided as to be unconscionable under the circumstances existing at the time of the making of the contract.”

The law can be applied in cases such as these:

• A 30-day warranty on goods which were not to be installed for six months.

• A clause limiting time to make a claim where the product contained latent defects.

• A disclaimer of warranties for a new car when a used car was delivered.

• A disclaimer of warranties where express descriptions of the product were made.

• A cancellation of a franchise without just cause.

• A buried reference in the fine print to a huge set of a company’s internal rules and regulations.

• A handwritten contract which is not clearly legible.

How can this help me?

Unconscionability takes many forms, from fraud to economic duress. While the UCC concentrates on contract formation (“at the time of the contract”), courts have shown a willingness to apply the concept to subsequent events.

In one case, for example, the liquidated damages clause, if fully applied, would have resulted in a forfeiture of the entire contract sum. The court, finding that such an outcome was unconscionable, refused to enforce the clause.

The main lesson here is that you or your legal representative needs to read the contract. When you find an unacceptable clause, delete it or find another way to limit its application.

When you are caught with a bad contract with bad consequences, check your state’s case law and statutes. You may find some protection there. For example, New York State, by court decision, will not enforce a pay-when-paid clause. Other states will. Some states, by statute, allow a contractor to sue an architect for negligence, other states will not.

Some contract clauses are just so overreaching and unfair that they shouldn’t be enforced even though the parties agreed to them. If you are a victim of that degree of unfairness, look to your state’s law and court decisions to see if they will protect you.

Your attorney can help you avoid unconscionable deals by reviewing your agreements before you sign off on them. Seek your lawyer’s advice whenever you suspect overreaching. EC