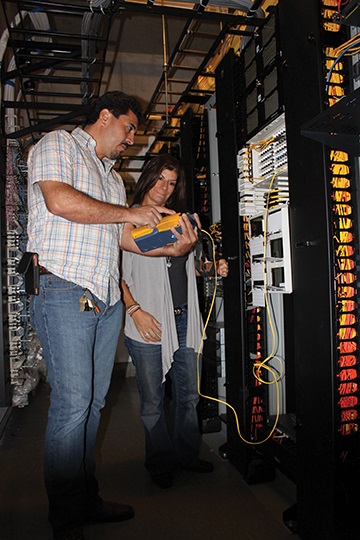 Karal Turbes, president and owner of Data Kable Technology, San Ramon, Calif., launched her company with the sole purpose of doing low-voltage work, and that’s all she does.

“I have been in the low-voltage business for about 18 years, including work I did in sales,” she said. “I eventually decided to branch out on my own and start my own company.”

While many contractors are willing to do pretty much any kind of low-voltage work and then grow their business as opportunities increase, Turbes operates differently. First, she specializes in specific types of low-voltage work. Second, she focuses on doing the work for one industry (with some business in another industry). Third, she purposely keeps her business small.

Turbes specializes in structured cabling for networks and telecommunications.

“We don’t do any other kind of low-voltage work,” she said.

Beyond that, Data Kable Technology specializes in serving customers in the biotech/biomedical industry, with a secondary focus on universities.

“When I started out in sales, I began building a clientele among biotech companies, and I have stayed with these companies over the years,” she said.

Even though there are a lot of biotech companies, Turbes said, the industry tends to be considered small and tight-knit, making the opportunity to make inroads into it less challenging than it might otherwise be.

Focusing on biotech companies makes sense. According to a recent report by PricewaterhouseCoopers, the California Healthcare Institute and BayBio, California is home to some 2,300 such companies, more than any other state. The report notes also that almost 850 of these companies are in the Bay Area, making that region home to the largest cluster in the state and, therefore, the nation.

Turbes has built her company on repeat business with existing customers and referrals.

“A lot of the IT directors in these companies know each other, and they talk, so we have been able to build a clientele that way,” she said.

Turbes also works with consultants, who bring her company into a lot of the biotech startup companies with which they work.

“Over the years, having been in sales and meeting these consultants, I started building relationships with them,” she said.

Data Kable Technology also does some work with Bay Area universities, many of which have relationships with biotech companies.

“These jobs just fell into my lap, and we have maintained good relationship with them over the years,” she said.

As a result of having built strong partnerships and focusing on specific work with a certain type of customer, Turbes has found that she has not needed to invest in much marketing. In fact, her company doesn’t even have a website.

Certainly, Turbes could grow her business quite large if she wanted. In fact, she said, she has, on occasion, walked away from some projects because she wanted to remain within a specific revenue each year.

“If a project is too large and has a long schedule time, we tend not to go after it because projects such as these sometimes aren’t money­makers,” she said. “We have thought about expanding, but even if we do, we aren’t ready to do so now. Things are working well for us.”

She prefers to keep it small and usually maintains about 10 employees at a time. This has allowed Turbes and her project manager to continue to do work that challenges and excites them.

“We recently built out a data center for a customer,” she said. “It involved a very tight timeframe with a lot of cable. There were many rows of cabinets in a raised-floor environment and a lot of cables going into them.”

While such projects were common a few years ago, they aren’t as common these days, which is why they found it so exciting.

Installing the cable tray in this project to meet California’s seismic requirements was the biggest challenge.

Still, without growing, Turbes relies on other experts to help in many of Data Kable’s projects.

“We get everything we need through distributors,” she said. “However, we do work directly with manufacturers’ reps. When we worked on the data center, we worked closely with the manufacturer’s rep on the design to make sure it would work, such as different ways of bundling cables, and to make sure it was as cost effective as possible.”

This input not only helped Data Kable Technology reduce costs, but also reduce the time required to do the project, which was important given the tight timeline.

“We also worked with the manufacturer’s rep to make sure that we would be able to get the materials quickly, since it was a tight deadline project,” she said.