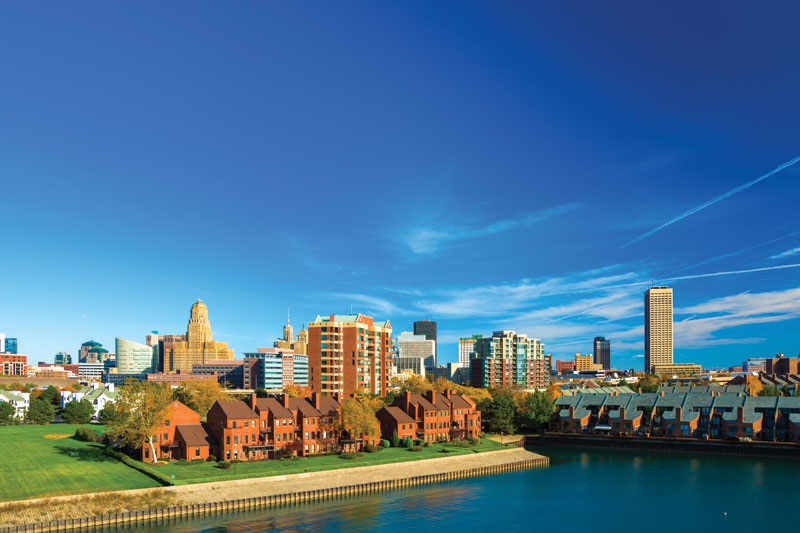 Once a crumbling urban area devoid of the manufacturing that had kept it alive for decades, Buffalo, N.Y., has staged a remarkable comeback over the last 10 years.

“I’ve lived here 37 years, and never have I seen it like it is now, with new hotels, a sports complex and more,” said Kevin Mislin, vice president, Ferguson Electric Construction Co. Inc.

A number of strategies led to the resurgence. One of these involved targeting specific sectors with growth potential, starting with education and healthcare.

For the latter, the city focused on the Buffalo Medical Corridor, a section of the city that has been booming in recent years with new facilities being built and expansions and remodels to existing facilities. These include Buffalo General Hospital, the 500,000-square-foot Gates Vascular Institute, the Women and Children’s Hospital of Buffalo, a new 300,000-square-foot medical office building, the new 628,000-square-foot University of Buffalo School of Medicine (which relocated to the Medical Corridor from another part of the city), the expansion of the Roswell Park Cancer Institute, and a new complex of laboratories.

New housing facilities, including a hotel, are being built for patients and families from out of town that need places to stay while receiving treatment.

“We have been involved with many of the projects,” Mislin said. “We did all types of electrical work on these projects—all the way from high-voltage substations and emergency generation to low-voltage data cabling, communications wiring, security and fire alarms—all the way from 23,000 volts down to 24 volts. We will do similar work for the new boutique hotel.”

With the stratospheric increase in the number of projects, finding qualified electricians has been a challenge.

“At one point, during the peak about a year and a half ago, there were almost 250 traveling electricians working on various projects in the city, a lot of which involved projects in the medical corridor. All of these workers are from other IBEW locals, so they have been vetted and trained, meaning that they are all qualified,” Mislin said.

There are still new projects being developed in and around the medical corridor.

“It is simmered down a bit from a year and a half ago, but work is still steady, and there are a lot of good opportunities still coming in the future,” Mislin said.