Dangerous Checks: The Meaning of Accord and Satisfaction 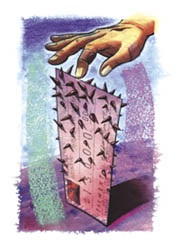 Cashing a check may be seen as accepting a settlement

A recent Virginia case highlights the danger of cashing checks that contain notations of “final payment.” In Gelles & Sons v. J. Stack Inc., Gelles performed masonry work worth close to $100,000. At project completion, Gelles was owed $26,000, which Stack refused to pay. Stack vaguely claimed that the work had deficiencies, but provided no details of the alleged poor performance. Stack offered to settle for half, but Gelles refused. Sound familiar?

Stack then sent Gelles a check for $13,000, half the amount owed, stating in a cover letter that the payment represented final payment on the contract. Gelles cashed the check and then sued for the other half. Gelles lost in court on the basis that cashing the check was an “accord and satisfaction” of the parties’ dispute.

What is “accord and satisfaction”?

A leading text on contract law defines accord and satisfaction as follows:

“The rule relating to an offer of accord is that the offer must make it clear that the offeror seeks a total discharge.... An acceptance of such an offer may take place by verbal assent or by conduct including under most authorities the cashing of a check sent ‘in full payment’....” — Calamari and Perillo, Contracts (3d ed.), West Publishing Co., 1987.

This concept is codified in the state law of Virginia, as it is in many states:

“If a person against whom a claim is asserted proves that:

(i) that person in good faith tendered [a check] to the claimant as full satisfaction of the claim,

(ii) the amount of the claim was ... subject to a bona fide dispute, and

(iii) the claimant obtained payment of the [check] ... the claim is discharged ...”

The questions of “good faith” and a “bona fide dispute” are critical. Generally, they prevent a person from using the “accord and satisfaction” concept to unilaterally reduce a credit card bill, telephone bill, or other utility invoice by writing “final payment” on a check or accompanying note.

In a personal injury case in Maryland (Loh v. Safeway Stores Inc.), Safeway’s insurer sent a check to an injured person with a cover letter stating that it was intended to be in full payment of her claim. No settlement had been reached. The injured woman’s attorney cashed the check and then wrote to the insurer that the check was insufficient to satisfy the claim—a bad mistake. The court ruled that the check was full payment.

“[I]n Maryland, when one party tenders a check in settlement of a dispute, making clear that [the check] will satisfy the claim ... if accepted, the party who accepts and uses the check, even though protesting against settlement, cannot make further claim ...”

In Maryland, holding on to the check, even without cashing it, can be considered an accord and satisfaction. The use or retention of a payment by a creditor, with knowledge of the condition that it is the debtor’s final payment, is regarded as an assent to the condition.

How can accord and satisfaction affect you?

Regardless of the size of your company, the person in charge of receiving and cashing checks should be alerted to take certain precautions: Review the accompanying cover letters and any notations on the checks. Even an inadvertent cashing of a check with a “final payment” notation can give the other party an argument that you accepted the “settlement.”

The Gelles decision should also teach you not to ignore a notation on a check. Gelles believed that Stock’s offsets were unfounded, and so it never agreed to any reduction in payment. Because there had not been any settlement agreement, Gelles thought the half payment was his to take, and that the other half payment would still be considered outstanding.

Gelles’ understandings were all reasonable, but they were defeated by the check. Using the three criteria noted above: (1) the amount between Gelles and Stack was in dispute, (2) Stack tendered the check with a clear statement that it was final payment, and (3) Gelles accepted the check by cashing it. The underlying issue of whether Stack acted in good faith apparently was not persuasively argued in court.

Waivers of lien are the topic of a prior article. (See the April 2002 issue.) It is becoming common for lien waivers, even partial waivers, to include very broad waiver language. Many lien forms provide that by accepting payment, the contractor waives not only its lien rights, but also rights to any disputed amounts.

Cases applying these lien waivers do not use the term “accord and satisfaction,” but the concepts of “waiver” and “accord and satisfaction” are closely aligned. The important point for you to know is that it is possible for a contractor to sign off on a document, or cash a check, without fully realizing the devastating effects of that action.

The Gelles case underscores the importance of reading documents before you sign or accept them. It should make you take notice and revise, if necessary, the procedures you use in your business to accept payment and sign off on lien waivers. If you receive a partial payment check intended as “final payment,” you should return it immediately with a cover letter that you are refusing to accept it.

Understanding certain basic contract law principles is essential for you to manage your business. You should review your business practices with an attorney who is familiar with these matters, and “red flag” out-of-the-ordinary situations so you can get legal advice in advance of acting on them. A brief consultation with your attorney before you cash a “final payment” check or sign a waiver or release form can save you from enormous consequences you might not have foreseen. EC