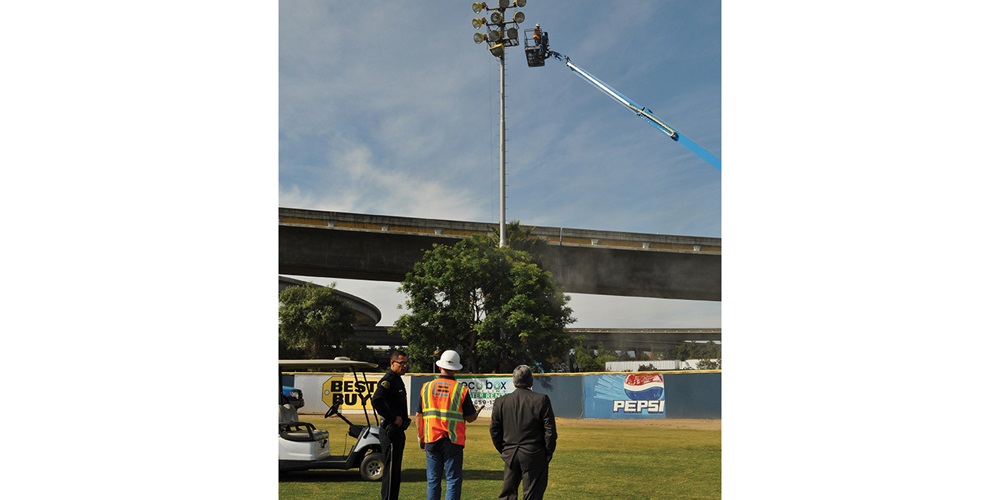 In May 2015, thieves stole copper wire from a light pole at the Police Activities League (PAL) Stadium in San Jose, Calif. Not only did they steal the cable, but they also damaged the light pole, threatening the viability of some of the upcoming youth baseball championship games that San Jose PAL sponsors.

While the price of replacing the stolen copper wire was $150, the cost to repair the 75-foot light pole was estimated to be about $25,000. This was because of the age of the pole and, given its height, a crane would be required to assist in the repair work.

However, repairs did not cost the San Jose PAL a penny. Cupertino Electric Inc. donated the parts, equipment and labor.

“I was watching the news one evening and heard about the wire theft,” said John Boncher, president and CEO of Cupertino Electric. “It really bothered me. The theft actually occurred in our backyard and at a location where so many of our employees and their children have spent countless hours enjoying baseball.”

The next morning, Boncher rallied the troops to research what it would take to repair the light pole and get the park back in business. A handful of employees immediately helped with the project.

“We had a crew on-site that very day to survey the damage, order supplies, and get to work that week,” he said.

The team had to strip and replace the wire running to each 75-foot lighting fixture, replace some of the lights themselves, and create a more secure, cement-cased pedestal at the base of the fixtures to deter future theft.

According to Boncher, the feedback has been overwhelmingly positive from employees, business associates and friends in the community.

“We knew that a lot of people in our network had ties to PAL, but we never knew how important that youth sports program was to so many people,” he said. “While we knew that we were in a unique position to help, we didn’t fully realize the extent that the impact of this project would have. We look forward to many more skills-based philanthropy projects like this in the future.

“We have always believed in giving back to the community, and we couldn’t think of a better way to make a difference than to donate our expertise to get this fixed quickly,” Boncher said.