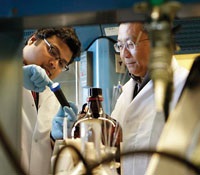 Creating catalysts that can operate efficiently and last a long time is a big barrier to taking fuel-cell technology from the lab bench to the assembly line. The precious metal platinum has been the choice for many researchers, but platinum has two major drawbacks: it is expensive, and it breaks down over time in fuel-cell reactions.

In a new study, chemists at Brown University report a promising advancement. They have created a unique core-and-shell nanoparticle that uses far less platinum yet performs more efficiently and lasts longer than commercially available pure-platinum catalysts at the cathode end of fuel-cell reactions.

The chemistry known as oxygen-reduction reaction takes place at the fuel cell’s cathode, creating water as its only waste. The cathode also is where up to 40 percent of a fuel cell’s efficiency is lost, so “this is a crucial step in making fuel cells a more competitive technology with internal combustion engines and batteries,” said Shouheng Sun, professor of chemistry at Brown and co-author of the study.

The research team, which includes Brown graduate student and co-author Vismadeb Mazumder and researchers from Oak Ridge National Laboratory in Tennessee, created a 5-nanometer palladium core and encircled it with a shell consisting of iron and platinum. The trick, Mazumder said, was in molding a shell that would retain its shape and require the smallest amount of platinum to pull off an efficient reaction. The researchers found a way to create a shell that uses only 30 percent platinum, although they expect to make thinner shells and use even less platinum.

“This is a very good demonstration that catalysts with a core and a shell can be made readily in half-gram quantities in the lab. They’re active, and they last,” Mazumder said. “The next step is to scale them up for commercial use, and we are confident we’ll be able to do that.”

The U.S. Department of Energy’s Office of Energy Efficiency and Renewable Energy funded the research as part of its Fuel Cell Technologies Program.