According to Study, Customers Less Satisfied with Utilities 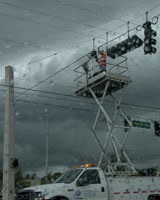 As electricity prices increase for a fifth consecutive year and many customers report experiencing an increase in the duration of power outages, overall customer satisfaction has fallen among residential customers served by the nation’s 76 largest electric utilities, according to the J.D. Power and Associates 2007 Electric Utility Residential Customer Satisfaction Study released in July.

The customer satisfaction industry average in the current study is 661 on a 1,000-point scale, which is down seven points from an average of 668 in 2006. Overall customer satisfaction is based on performance in six factors: power quality and reliability, company image, price and value, communications, billing and payment, and customer service. Utilities are ranked in four geographical regions as well as in a segment for medium-sized utilities.

With the absence of any major hurricanes off the Atlantic coast of the United States between April 2006 and March 2007, customers in the Southern region report a decrease in the duration of power outages, compared with the 2006 study. However, storm events affected several other parts of the United States, and customers in all other regions report experiencing longer outages than in the previous year. The Midwest experienced the longest outage durations in 2007, averaging 13 hours.

Overall, this drop in satisfaction is mainly due to a nationwide trend of higher prices and unsatisfactory service. As the dependability of energy utilities comes into question, electrical contractors can show their support by offering service to utilities during storms and other weather-related events and through promoting energy efficiency.   EC