2014 Profile of the Electrical Contractor, Part 2 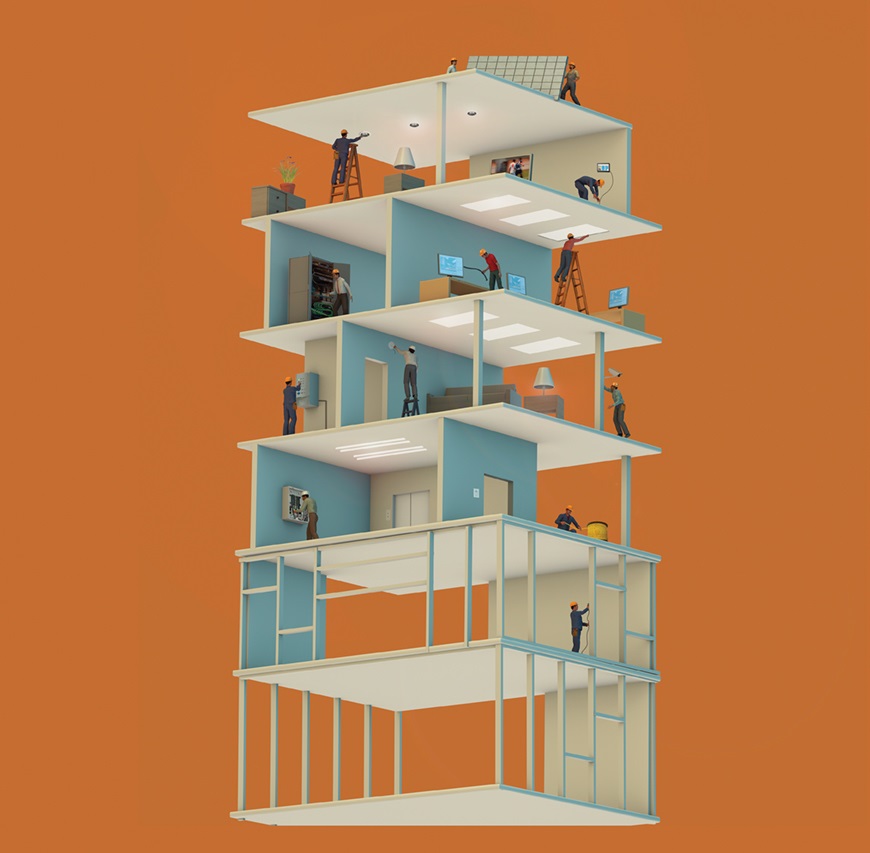 Your Business Market Research Profile of the Electrical Contractor

Last month, We began our exploration of how—and how much—today’s electrical contractors (ECs) are working, with Part 1 of our coverage of the 2014 Profile of the Electrical Contractor. We focused on the kind of work ECs are doing and the types of projects most important to their bottom lines. This month, we wrap up the profile with a look at how well ECs are playing with others—in other words, we will cover how often (and how early) they are involved in project teams, the roles they play, their level of influence, and how various collaborative building processes, including building information modeling (BIM), have become a part of their projects.

Questions on building-team structure are a regular part of our biennial Profile surveys, and this year’s results stuck very close to those from 2012. Design/build (DB) and design/assist (DA) have become common project delivery methods for all electrical contractors, whether small or large, though larger firms see them more frequently. Across the entire sample, about 70 percent of firms participated in DB and/or DA projects in 2013, including 63 percent of firms with nine or fewer employees and 84 percent of firms with 10 or more employees. These figures are not statistically different from those in the 2012 results (see Figure 1).

Almost 20 percent of survey respondents reported they now get involved earlier in design collaborations than was the case three to five years earlier. However, the vast majority—60 percent—say there has been no change in when they join a team. These percentages also are similar to 2012.

What has changed since 2012, however, is the relative importance of DB and DA projects to firms’ bottom lines, as the percentage of revenue attributable to such projects has fallen a bit in the last two years. Our 2014 survey credits DB and DA projects with an average of 39 percent of electrical contractors’ revenues across all firm sizes, down from 43 percent in 2012. Traditional bid/build projects account for almost half (49 percent) of all revenues, with other, unidentified arrangements making up the remaining 12 percent. Note “other” is much higher for firms with 1–9 employees (driven by firms with 1–4 employees) (see Figure 2). (Editor’s note: “Other” has been increasing since at least 2006, when it was 7 percent; we will conduct additional research to better understand what makes up this “other” category.)

It’s possible that some of these other arrangements are now projects using integrated project delivery or building information modeling (BIM) as those collaborative building processes have been on the rise over the past few years.

Regardless of a project’s structure, it seems one thing electrical contractors can count on is incomplete plans and specifications—in fact, about 80 percent of surveyed firms had received some incomplete documents in the past year. On average, respondents also said that 43 percent of all plans and specs were incomplete. Apparently, this is nothing new—the figures are statistically unchanged from those in the 2012 Profile.

With incomplete documentation being such a common occurrence, it’s good to know that approximately 76 percent of surveyed ECs report either a medium or high ability to influence a project’s overall electrical design or electrical specifications (see Figure 3). While most say they are entering into projects at around the same time in the development process as in the past, about 20 percent of these electrical pros report they’re now getting involved earlier.

All of this confirms a trend toward greater influence for the electrical contractor in preparing plans and specs.

An interesting thing about this perceived level of influence is that those in the smallest firms report having more than those in larger companies. Thirty-nine percent of respondents from companies with one to nine employees report a “high” ability to influence the design or specifications, versus 28 percent in companies with 10 or more employees. Those from larger firms also are more likely to report having a “low” level of influence—at 21 percent, versus 12 percent overall. They are, however, twice as likely as smaller firms to say that they get involved earlier in the design process (25 percent versus 13 percent). One possible explanation: larger firms may be participating in large-scale, more complex projects, with separate electrical engineering consultants in charge of design issues or product decisions may be made as a team.

Among the areas where an EC’s influence is most important is in deciding which products will be used in their projects. To begin our investigation into how important ECs are in the specification process, we asked survey participants what percentage of the initial specifications they received fell into each of four categories: a single brand, multiple brands, an “or equal to” qualification, or a performance-based target. “Multiple brands” took the top spot, with an average of about 35 percent of specifications, regardless of firm size, which means ECs have greater latitude in final product selection. Similarly, performance-based specs take up about 15 percent of the total, across the firm-size spectrum (see Figure 4).

However, whether a firm was more likely to see single-brand or “or equal to” specifications was entirely related to size, with single-brand specs making up close to 30 percent of the total for small companies and only about 15 percent of the total for those with more than 10 employees. On the reverse, larger firms see “or equal to” specs just about 35 percent of the time, while those with nine or fewer employees receive them approximately 25 percent of the time. This difference could be the result of larger firms being more likely to work on larger projects, with greater involvement of a specifying electrical engineer, with the final product decision falling to the EC.

Of course, what is actually used in a project is more important than what’s initially specified, so an understanding of a contractor’s ability to make substitutions is critical in any discussion of purchasing influence. Averaging responses from all firm sizes, ECs are able to influence final product selection slightly less than 70 percent of the time (see Figure 5). Once again, there’s an interesting split when looking at smaller versus larger firms, with smaller firms allowed somewhat more discretion than their larger counterparts to make changes where single-brand or proprietary specs have been issued.

BIM is slowly becoming a more prevalent part of electrical contractors’ work. Currently, 23.7 percent now see at least some use of BIM in their projects, for an average of 7.1 percent of the time. Not surprisingly, given the investment required for BIM-related software and workstations, the technology is most prevalent in the largest firms. The average climbs to well over 20 percent in firms with 100 employees or more, with 70 percent of respondents in those firms reporting at least some use of BIM (see Figure 6).

Respondents see the growth in BIM continuing into the future. Those surveyed expect to see usage grow in the next two to three years, anticipating those figures to climb to 28 percent and 11.6 percent, respectively.

What factors are driving your purchasing decisions? Well, not surprisingly, availability and price rank first and second for both original product selections and product substitutions, when ECs were asked to choose the three most important purchase-decision factors. However, a category just added to the 2014 questionnaire—compatibility with existing systems—has leapt directly into the top three, drawing interest from 34 percent of responding ECs, when asked about original brand selection. The interest jumped to 38 percent when respondents were asked about reasons for brand substitution—meaning these ECs might be switching brands because an originally specified product was incompatible with other systems. It makes sense when looking at lighting; for example, with a raft of new LED fixtures hitting the market, each with specific dimming-controls requirements, it becomes easy to see why compatibility has become so important to specifiers (see Figure 7).

Following close behind these three reasons were factors that all captured about 30 percent of respondents’ interest, including whether or not a product was made in the United States, prior experience with a product, the reputation of its manufacturer, durability and ease of installation. In a third tier, with each drawing about 20 percent of surveyed ECs, were energy efficiency, specific features and manufacturer support and training.

Our researchers found an important difference in top-three rankings based on firm size—those from smaller companies are much more likely to look for ease of installation, durability, specific features, word-of-mouth recommendations and the availability of real-time mobile information. When considered as a group, what these factors have in common is an ability to provide reassurance to a specifier (who is likely also the hands-on installer). Price is less important to this group—in fact, price is the only characteristic more important to larger firms than their smaller counterparts.

We had some heartening news with this year’s survey data. More firms have been hiring, fewer firms have been losing staff and, in general, ECs seem to be diversifying their businesses by branching out into new areas. This willingness to step out of long-time comfort zones will likely only grow in importance, as DB and DA project structures become more important to many firms’ revenues and BIM experience becomes a more important project qualification. We don’t know yet how significant these changes will become as the economy (one hopes) continues to recover and expand. Check back in a couple years for our 2016 Profile of the Electrical Contractor.