Flicker Can Lead To Flickering 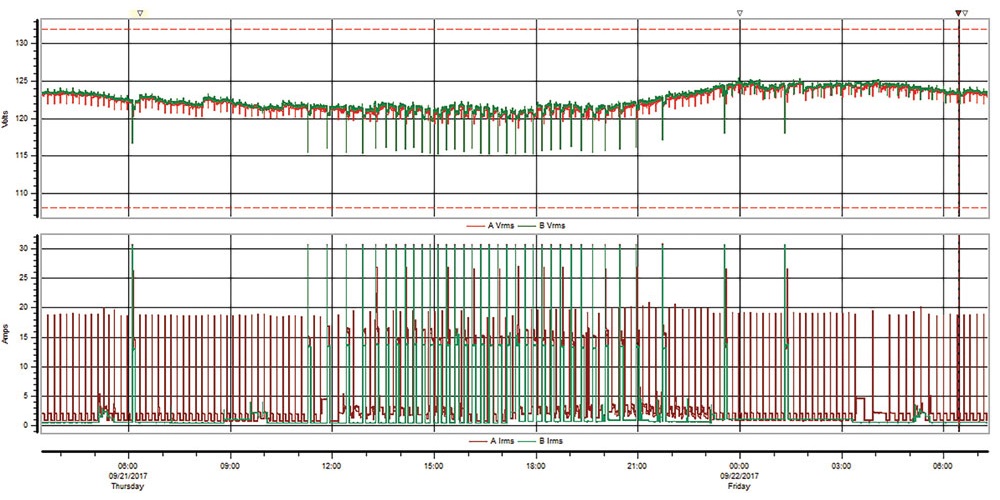 When a customer complained about the lights flickering in the past, it was difficult to get a quantitative measure of the problem. The parameter, Pst (perceptibility short term), specified in IEC Std 61000-4-15 and eventually IEEE Std 1453-2004, now provides such a quantitative approach. If it was less than 1, then there was considered to be an “acceptable” amount of light flicker and not much more is done (until the customer complained louder and higher up the utility chain). More than 1, and the hunt begins following the same methodology that we used for rms variations such as sags or swells.

Like all PQ phenomena, the voltage fluctuations that result in light flicker follow Ohm’s and Kirchhoff’s Laws. If the voltage fluctuations occurred without any significant current changes, then the origin was most likely upstream. If monitoring at the point of common coupling, then it was likely the utility’s problem. If the voltage changed at the peak of the waveforms only, perhaps arc-over from tree branches making contact on a windy day, or insulator breakdowns. If the current changed significantly, such as from a large load starts, then the source was likely in the facility.

A typical cause can be masked by the comments from the observers. Sometimes you have to “listen between the words” to what is really happening.

At a residential dwelling, one occupant had a different description of when it happened than the other, which is not unusual at crime scenes. One of them stated that the problem occurred randomly at different times of day in different rooms with different lights. Sometimes it was the kitchen light, another time the dining room light, and other times the bedroom light. Rarely did the living room light blink. The other person only observed it during dinner in the kitchen.

The graph below shows what the PQ monitor recorded at the breakers panel, monitoring the two phases feeding the dwelling. The voltage on both phases decrease approximately 6 volts at the same time that the current on both phases goes to 30 amperes (A). The 30A peak may actually be an underestimate of the actual value, as the CTs were intended to be used on an individual circuit, not the two service wires feeding the 200A panel. But it clearly shows the correlation between the voltage decreases and current increases from within the facility. It wasn’t enough to be categorized as a voltage sag, but plenty to make the lights blink. Further analysis showed that from noon to 8 p.m., they occurred with regularity, every 15 minutes during peak temperature times of the day. This, along with the current characteristics of the waveforms indicate that it was the HVAC system turning on, though a bit more often than it should be.

So, why the difference in observations from the two parties and electrical reality? One person leaves for work early in the day before the HVAC kicks on and isn’t home for most of the day. In the evening, the other person is in the kitchen cooking. One stays up watching TV while other is in the bedroom with a low-wattage light on, trying to get the baby to sleep. Hence, the one sees it more frequently, but it may seem random, given the time spent in different rooms doing various activities. Low-wattage incandescent lights are among the most sensitive lighting sources to voltage fluctuations producing light flicker. It isn’t observed during the daytime because the lights aren’t on and there is plenty of outside light coming in, which was generally the only time that the living room was occupied. It all seems obvious in retrospect when viewed with the recorded data, even though the initial comments seemed to point to a different problem.

Different types of lamps used in the lighting fixtures also affect what is observed as well as how susceptible they are to different PQ phenomena. While the standards were originally written for 60-watt (W) incandescent bulbs, fluorescent tube, CFLs, halogen and LED lamps have all been observed to have light flicker under certain situations. Work continues in standards groups to come up with a Pst equivalent algorithm for those sources.

But what to do when there is no evidence of upstream or downstream source? The current isn’t increasing significantly on the branch circuit that feeds the lighting fixture nor is the voltage changing at the breaker panel. It is difficult to measure the voltage at a screw-in light bulb luminaire, but with a little ingenuity, an adapter can be made to measure it. In one case of recessed lights going off and on randomly in a kitchen, it turned out to be just a bad batch of CFL spotlights. The voltage never fluctuated at the socket, yet the light would go dark briefly. Replacing them solved the problem.

In another case where there was no voltage or current on the circuit at the breaker panel, the problem was traced to a bad connection under the wire nut, which connected the lighting fixture wire to the branch circuit. It was so bad that the wires were black from the carbon produced from all the arcing.

Turns out that wasn’t the only problem. Further investigation found that the light fixture had no switch to turn it on and off. So, the homeowner would reach up and screw in and unscrew the bulb each time they used it. Tugging on the ceiling fixture with bad connections could have evidently changed light flicker into flames flickering.