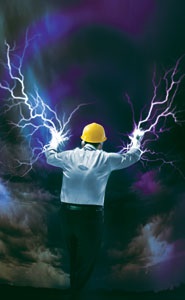 Here's a statistic: Lightning strikes the United States more than 25 million times each year. Sadly, these strikes are responsible for nearly 500 deaths and more than 2,000 injuries. According to Underwriters Laboratories (UL), lightning accounts for more than $1 billion in annual structural damage. Insurance industry reports claim a 20 percent increase in the cost of homeowners’ claims for damage due to lightning strikes since 2004.

Here’s what: Electricians, plumbers and others in the building trades may be inadvertently creating a potential for a lightning-related explosion by installing corrugated stainless steel tubing (CSST) as the device for delivering gas to residences or bonding lightning protection devices in an area that CSST is present.

Following a series of major explosions, a 2004 class action lawsuit named four manufacturers of CSST as defendants. In the suit, filed in circuit court in Arkansas, plaintiffs alleged that “manufacturers of corrugated stainless steel tubing are producing a product that is unreasonably dangerous; poses an unreasonable risk of ... fire due to lightning strikes; has a wall thickness of only

2 mm, compared to traditional black pipe, which has a wall thickness of 4 mm; and transforms an otherwise safe structure into a hazardous and dangerous one.”

The suit settled in March 2007, when the four defendants agreed to provide compensation for the installation of lightning protection systems, or bonding, to defray the cost of hazard mitigation. The deadline to enter a settlement claim closed Sept. 5, 2007, leaving out an unknown number of property owners.

CSST represents a relatively new technology for delivering fuel within a residential or commercial structure. CSST consists of stainless steel corrugated tubing that is sheathed by a polymer conformal coating. It generally conforms to ANSI LC-1. Among its attributes is reduced installation time, relative to black pipe, the traditional standby. In addition, it also requires no threading.

However, industry experts assert that those advantages may present a risk of failure that, when exposed to an electrical shock, can produce an explosion.

The potential risk was summarized in a presentation titled “Lightning Induced CSST Fires” by Mark Goodson, P.E., and Mark Hergenrether, MSME, presented at the 2005 Fire and Materials Conference.

The authors stated, “CSST is extremely thin, with walls typically less than 10 mils in thickness. This lack of mass, necessitated by the desire for easy routing of the tubing, has resulted in a material that is easily punched through by electricity. Once the tubing has been perforated, it is possible for the escaping gas to be ignited by the metallic by-products of the arcing process, by auto-ignition, or by adjacent open flames.

“Our own field data indicates that lightning damage to black pipe is sometimes so small that it is often only visible with microscopic analysis and limited to a small pit that does not leak. Lightning strikes involving CSST create leaks that vary from pinhead size to almost ¼-in. ‘orifices.’”

The risk of damage from an electric charge is exacerbated by the fact that “lightning does not have to strike a building directly in order for the CSST to be affected,” said Guy Maxwell, president of the Lightning Safety Alliance. “The reports of CSST-related fires that I have seen have involved strikes that were near the structure.”

“Beyond that, there are other issues,” said consulting engineer Mitch Guthrie, former chairman of the NFPA Lightning Protection committee. “We are not certain whether CSST, or any corrugated tube, may be susceptible to a leak when it is twisted. We don’t know how much energy it takes to burn a hole, how sensitive the CSST is to an arc or whether that energy can be produced by a lightning strike.”

“There is a significant need to equalize a structure, to prevent damage from lightning strikes, and we need an easy path to ground,” said Mark Morgan, president of East Coast Lightning Equipment, Winsted, Conn., a manufacturer of lightning equipment. “However, there is no way to know exactly what current stainless steel tubing can take and the point at which a potential gas explosion may occur.”

“An estimated 2 million homes in the U.S. have CSST piping,” said Bud Van Sickle, executive director of the Lightning Protection Institute. “We don’t know the extent of the problem, because CSST is still being installed. However, resolution of the problem is not going to be people stopping its installation. Resolution is installing grounding and lightning systems that deal with the problem.”

More than two centuries have passed since Benjamin Franklin conducted his lightning experiment with a kite and a door key. Interestingly, the Franklin Air Terminal still is generally conceded to be the most effective system for protecting a structure.

Franklin further complicated the issue by stating that his lightning protectors dissipated electric charges prior to their arrival. He later retracted that contention by admitting that the exact mode of operation of the device was something of a mystery. Thus began a 250-year dispute between the dissipation theory and the diversion theory of lightning protection that most recently placed an American court in the middle of the arguments.

During the 1990s, four American companies were marketing early streamer emitters (ESE). These sophisticated lightning collectors were allegedly capable of compensating for the inadequacies of a conventional lightning rod by dissipating a strike prior to its arrival.

They were described as “an air terminal equipped with a device, or formed in a manner, that created an upward propagating streamer faster than a standard air terminal. This streamer connects with a downward propagating leader of a lightning strike and diverted the path of the strike.” Several different designs were marketed, each claiming a different protective radius and each designed to replace a number of conventional Franklin Air Terminal Systems with a smaller number of ESEs.

Subsequently, their claims were investigated by the U.S. Standards Committee NFPA 780 and the NFPA Standards Council. The results of their analysis were recorded in the final report, “Early Streamer Emission, Air Terminals, Lightning Protection Systems, Literature Review And Technical Analysis,” published in January 1996. NFPA reviewed 303 different works, rejecting 301. The remainder were produced by manufacturers. As a result, the U.S. NFPA Standards Council rejected consideration of the ESE for a new standard and does not recommend their use.

In an unprecedented move in 1999, an international committee of 17 scientist-members of the Scientific Committee of International Conference on Lightning Protection issued a joint statement opposing ESE lightning rod technology.

The committee report stated, “The function claimed for the operation of the ESE rod has never been proven to be correct under natural lightning conditions. Independent researchers have been unable to demonstrate the expected advantages determined by means of the specified laboratory tests. On the contrary, the ESE rod and the simple Franklin rod do not show any major difference in the protection distance and the difference in the number of flashes to the Franklin and the ESE rods in competition tests.”

Fast forward to Jan. 8, 2008, when the Ninth Circuit Court of Appeals placed a lid on the proceedings. In supporting a lower court ruling, the court affirmed the decision that plaintiffs had failed to prove that ESEs are capable of dispersing lightning strikes, and affirmed East Coast Lightning Protection’s claim that the ESE manufacturers had engaged in false advertising.

The bottom line is lightning devices based on Ben Franklin’s initial theories are still the generally accepted devices for ameliorating the effects of a lightning strike.

Since a lightning strike can fry a computer, surge protectors are a given in today’s business world.

But that’s only the tip of the iceberg as it relates to other electronic devices. If you are installing security systems, computerized home management systems, high-end home theater systems or sophisticated Internet devices, consideration should be given to protecting each of those circuits.

“That is one area that now deserves more careful scrutiny than in the past,” said Rich Feldhaus, product specialist at Tripp Lite in Chicago.

“At one end of the scale are basic surge strips designed to handle the least nefarious power surges,” he said. At the other, a more sophisticated Torroidal filter.

“It is comprised of a circular ferrite core wrapped with balanced wire windings to continuously filter and attenuate high-frequency noise present on incoming power,” he said.

In operation, the protector may be expanded to include eight levels of protection for a network of appliances. In more sophisticated installations-—home theater systems, for instance—protectors are stackable and programmable, and following an inadvertent shutdown, their startup sequence is programmed to meet the component’s manufacturer’s recommendations.

As an installer, that translates to your ability to identify the potential risks a builder or occupant faces and recommend the device that will protect their equipment.

LAWRENCE is a freelance writer and photographer based in Bozeman, Mont. He can be reached at [email protected].

Ed Lawrence is a freelance writer and photographer based in Bozeman, Mont. He can be reached at [email protected].