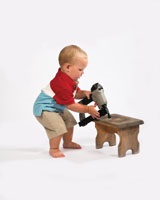 According to new statisticscollected by researchers at Duke University Medical Center and the Centers for Disease Control and Prevention’s National Institute for Occupational Safety and Health (NIOSH), the number of injuries from nail guns has almost doubled since 2001.

The Duke researchers said many injuries caused by nail guns could be prevented by using tools that fire only when the nose piece is depressed before the trigger is pulled. This sequential trigger mechanism is designed to prevent rapid, unintentional firing, but it has not been used as much as tools that allow the user to rapidly “bounce fire” nails.

“These kinds of injuries are often seen as bizarre accidents, but they actually occur fairly frequently, and we know quite a bit about factors that contribute to them,” said Hester Lipscomb, Ph.D., an associate professor of occupational and environmental medicine and author of the new report. She has long studied nail gun injuries among construction workers, but she says this is the first such analysis of injuries among consumers.

For this analysis, Lipscomb used data collected from emergency departments across the country by the U.S. Consumer Product Safety Commission and NIOSH.

Injuries to consumers and workers largely involve puncture wounds to the hands and fingers, with forearm, wrist, leg and feet wounds less common. Of the injured consumers and workers, 6 percent were admitted to the hospital, while the others were treated in the emergency department and released.

About 96 percent of the injured consumers were male, with an average age of 35. Lipscomb believes the widespread adoption of safer, sequential-trip triggers could reduce the number of injuries, both for professional and weekend warriors.

“While safety training offers an important way of reducing injuries, we believe that the adoption of the safer triggers would be more effective, especially since many consumers—and even workers—do not receive adequate safety training,” she said. She also said many users are not aware of the different types of nail gun triggers and thus may not be able to make a fully informed decision.

Lipscomb recommends that consumers purchase nail guns with a sequential-trip trigger or kits to convert their current nail gun triggers to the safer type. EC