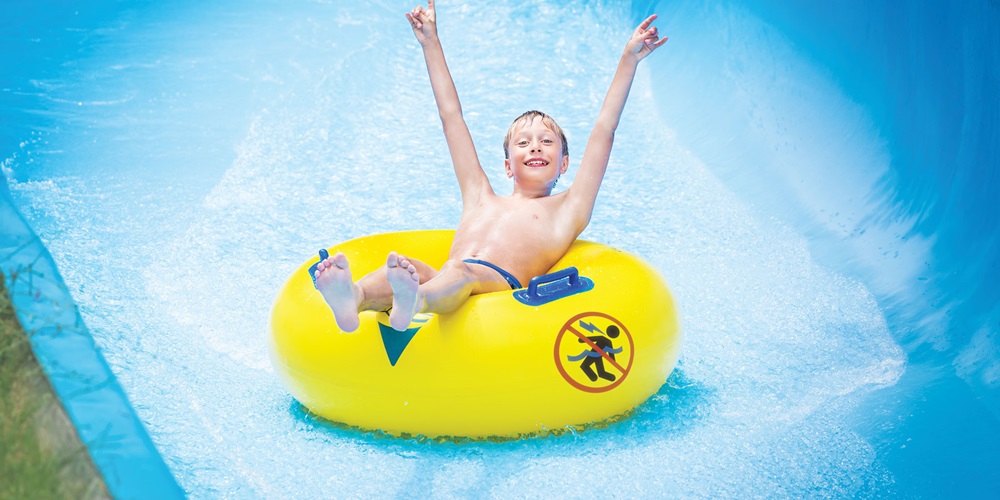 When All Electric Services Inc.,  Carbondale, Ill., won the electrical installation for a water park in its hometown, the company made safety the project’s focus. A site combining electricity, water and people naturally poses potential hazards, and  All Electric Services was determined to  eliminate any risk, both when the site opened and decades into the future.

Open this summer after several years of planning and funding and a full year of construction, Carbondale’s Super Splash Park is a water park with a grounded and bonded electrical system that complies with the National Electrical Code (NEC), minimizing differences of potential between conductive parts and reducing electrical shock hazards. The facility is also known as the Outdoor Aquatic Center under the Carbondale Park District (CPKD).

J & L Robinson Development & Construction Co. in Carbondale was the general contractor. All Electric Services installed all of the electric and low-voltage power.

White & Borgognoni Architects of Carbondale designed the bathhouse, while Asaturian Eaton and Associates, also in Carbondale, served as the engineering firm for the park. The aquatic design came from Counsilman-Hunsaker in St. Louis, while Westport Pools of Maryland Heights, Miss., served as the aquatic consultant.

This project has been decades in the making. Carbondale city officials have planned to build an outdoor municipal swimming complex for more than 40 years, but budgetary constraints held it back.

Driven by the concept that water parks bring communities and people together, the CPKD persisted, said Kathy Renfro, CPKD executive director. The district wanted the water park to be a place where the community could celebrate its diversity.

In 2003, the city’s Human Relations Commission gathered a group of citizens to evaluate feasibility and begin planning to make the swimming complex a reality. In 2011, the CPKD was notified that the district was a candidate to receive a $2.5 million grant from the Illinois Department of Natural Resources (IDNR) for the aquatic center. The funds were made available from federal economic stimulus money distributed through the IDNR. To receive this money, the CPKD had to raise at least 25 percent of the project’s total cost from its own community. Therefore, the fundraising goal was $900,000.

The city went on a drive for area vendors, local businesses, citizens and agencies to help raise the matching funds and pulled in the money through one small donation after another.

The project broke ground in October 2014, with plans for a 2015 summer opening, but budgetary problems halted work. It resumed after about nine months and was finished and opened to the public for Memorial Day weekend this year.

The park consists of a lazy river, several water slides, a children’s pool, a leisure pool, an Olympic-size competitive pool, showers, a bath house and a concession stand.

There were several challenges specific to this project, including ensuring bonding was done according to the NEC, said David Conder, All Electric Services president.

Before this project, All Electric Services had wired pools, but the Super Splash Park was the company’s first commercial pool facility. In the interest of getting it right and in addition to consulting the NEC, surprisingly, the contractor supplemented their information sources by referring to the internet for educational and training videos on bonding requirements.

The biggest danger that this project presented was differences of potential between the pool water and the deck and any metal parts within 5 feet of the pool’s inside walls. The NEC requires all fixed metal raceways, piping, awnings, fences, window frames and other metal parts that are installed horizontally within 5 feet. from the pool’s inside walls to be bonded, creating an equipotential plane.

To reduce voltage gradients, All Electric bonded every metal part that contacted circulating water, or was within a minimum distance of the water, to comply with the NEC. Specifically, all metal pool structure parts were bonded with a solid copper conductor no smaller than 8 AWG. Anything metallic also had to be bonded 3 feet beyond the perimeter of the pool.

To reduce voltage gradients, All Electric bonded every metal part that contacted circulating water, or was within a minimum distance of the water, to comply with the NEC.

The contractor ran a copper conductor 18–24 inches from the pool’s inside wall. Any conductive material within 5 feet horizontally or 12 feet vertically was suspect and required bonding. Metal fittings, ladders and handrails also had to be bonded.

“Once the pool company started forming up walls, we started tagging,” he said.

Initially, during the concrete pours, the company had to tag all the rebar and identify every object that needed bonding, including the handrails, ladders, pool dividers, fixtures and even the perimeter fence. The contractor bonded the luminaires inside the pool, slides and lazy river three different ways: first bonding the housing as it was poured into concrete, then the second housing inside, and the light inside that second housing. The company also bonded the pump motors and rebar in the ground around the pool and vents within the pool edge.

The water slide also required bonding for umbrellas in the vicinity. Renfro said these were known as the “Funbrellas,” and every sleeve of each umbrella had to be bonded.

“The attention the contractors paid to these details really put my mind at ease,” she said.

Concerns about shock from stray voltage or differences of potential between metal parts was the foremost issue the company investigated for this project.

“I’ve been in buildings where something like a ladder can give you a shock,” Conder said, adding that the company had no intention of doing work that could create the same. “If it isn’t done right, it could take years for something to happen, but the potential is always there.”

Conder has studied the Code for years. He said a high percentage of existing structures may not be in compliance with today’s NEC grounding and bonding rules.

Altogether, All Electric ran about 5,000 feet of copper ground wire to bond everything metallic or electrical together.

Other aspects of the job

All Electric Services ran cable for the pump motors, lighting and the low-voltage system that managed the pumps, chemical flow and temperature of the water. The electrical contractor also programmed the water-management system.

The company installed about 40 luminaires in the lazy river, the pools and water slide. All Electric didn’t install the motors, but supplied the power to the 20- and 30-horsepower, 480-volt pumps that keep water moving in the facility. The company provided the programming for the pumps and the chemical and temperature systems.

The company had about four men on-site for about one year, working through the winter. The weather created some additional issues at times; for example, after a heavy rainfall, the crew had to pump water out of the site to continue work.

The project required each section to be built separately to create its own unique drainage system. All Electric Service staged its work with each separate concrete pour.

“There were so many sections because of all the drains,” Conder said.

In addition, everything was built on slight slopes for drainage into troughs, but American with Disabilities Act requirements dictated that the concrete surfaces not slope too much.

“That was pretty challenging working with all the trades on that,” he said.

The Outdoor Aquatic Center is now open to the public seven days a week. This property is managed in partnership between the CPKD, the City of Carbondale, and the Carbondale Middle and High School Districts. When finished, the pool construction cost reached $3.4 million, $2.5 million of which was paid through the state grant. Ultimately, the work came in on budget.

“There were basically no change orders,” she said.

Currently, about 500 people come to the park each day. Renfro said it has achieved the goal of bringing the community together, and the soothing effects of water seems to bring a sense of calm to those playing together there.

“We’re enormously pleased with the park and with the construction project,” she said.