Not Me! How Shocking! 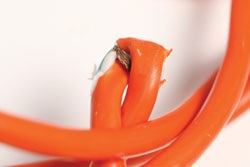 OUCH! I can’t believe I just did that. While trimming the hedge at home one afternoon, I moved the orange extension cord around one of the bushes. Simple enough—being a very safety conscious person, I wanted to ensure I did not accidently cut it. As I grabbed the cord, I felt an unexpected surprise. The painful buzz in my hand said it all. I had just received an electric shock. It isn’t supposed to happen to me. I teach people how to avoid shocks.

It was a not-so-subtle reminder of just how easily this potentially deadly event can occur. Puzzled about why it happened, it became apparent when I looked at the cord (something I should have done first). Sure enough, there was a minor nick in the orange insulation revealing a very small, shiny spot—the exposed conductor.

How often?
I began to wonder how many others have experienced a shock. I recalled a statistic found in NFPA 70E Informational Annex K.2 Electric Shock that states, “Approximately 30,000 nonfatal electrical shock accidents occur each year.” This number always seemed large, and now I know why.

Digging a little deeper, I decided to survey a group involved with electrical power systems and electrical safety. The question was, “Have you ever received an electric shock?” I assumed, based on NPFA’s number, there would be a relatively high percentage of people who had. However, the results were surprising.

Out of a group of around 100 people, every one of the respondents indicated they have been shocked before—100 percent. I asked a follow-up question: How many times have you been shocked?” More than half answered, “More than I can remember.”

Much of what is known today about the effects of electric shock on the human body can be traced back to research conducted by Charles Dalziel. His work in the late 1940s and early 1950s, and his landmark 1961 paper, “Deleterious Effects of Electric Shock,” helped define current levels that can produce certain physiological responses in the body, which paved the way for the development of the ground-fault circuit interrupter (GFCI).

GFCI protection
A GFCI device is designed to operate when it senses an imbalance in the current flowing on the phase and neutral conductors of an electrical circuit. Both of these conductors pass through a sensing transformer, and if more current flows through one conductor than the other, it is likely because the “missing current” is taking an alternate path, perhaps though a person. The device responds by tripping instantaneously to interrupt the potentially deadly circuit.

The National Electrical Code (NEC) defines a GFCI as “A device intended for the protection for personnel that functions to de-energize a circuit or portion thereof within an established period of time when a current to ground exceeds the values established for a Class A device.” In an informational note, the Class A GFCI is required to trip when the current to ground is 6 milliamperes (mA) or higher and should not trip when the current is less than 4 mA.

The 2012 edition of NFPA 70E was expanded to include additional language about GFCI protection. Sections 110.4(C) (1) and (2) were added and require the use of GFCI protection where applicable state, federal or local codes and standards specify it. In addition, GFCI protection shall be provided when an employee is outdoors and operating or using cord-and-plug-connected equipment supplied by 125-volt, 15-, 20- or 30-ampere circuits. As always, each new edition of NFPA 70E brings with it continually improving electrical safety practices.

A common saying is you don’t always get a second chance when making mistakes around electricity. Although mine was minor, I quickly bought a new extension cord and added GFCI protection to the garage circuit. I will not count on having that second chance.

PHILLIPS, founder of www.brainfiller.com and www.ArcFlashForum.com, is an internationally known educator on electrical power systems and author of “Complete Guide to Arc Flash Hazard Calculation Studies.” His experience includes industrial, commercial and utility systems, and he is a member of the IEEE 1584 Arc Flash Working Group. Reach him at [email protected].