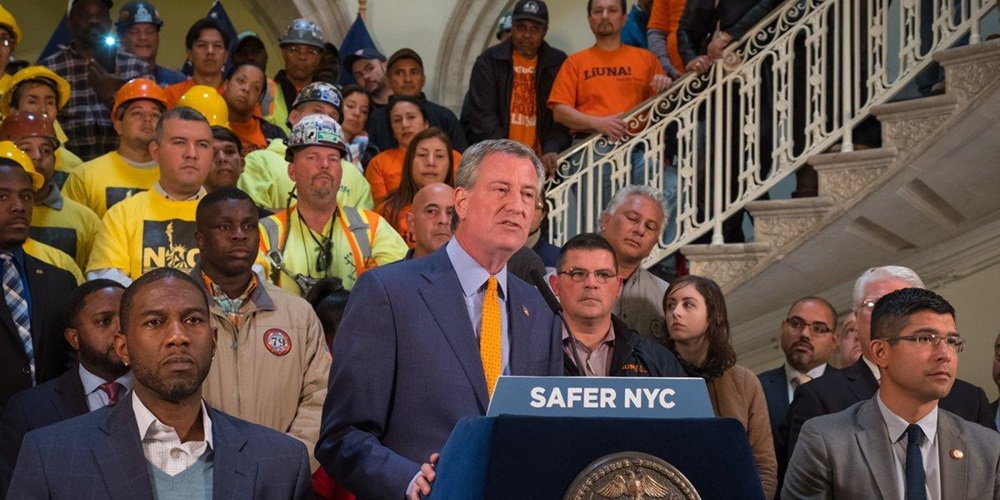 Beyond the training requirements themselves—which completely go into effect in fall of 2020—the legislation also creates a task force that will monitor the changes and ensure the training hours are met.

The text of the bill states: “The department, or an agency or office designated by the mayor, shall by March 1, 2018 develop a program to provide equal access to construction site safety training required by section 3321 of the New York city building code. Such program shall address the needs of individuals who do not have equal access to such training.”

Councilman Jumaane Williams, who sponsored the bill, said the city would contribute $5 million toward helping pay for the training, addressing the concerns of the industry and nonunion workers.

During the signing ceremony, Mayor de Blasio emphasized that the focus of this bill is saving lives, since there have been too many construction-site accidents during the city’s recent building surge.

“It’s just not acceptable to lose a life when we could save that life,” he said. “It’s heartbreaking, it’s painful, it leaves a horrible reality for a family left behind. And, too often these work sites were not managed the way they should have been.”

The debate is far from over; both supporters and opponents of the bill are waiting to see to what degree union and nonunion contractors are represented on this task force.

“In a city constantly under construction, worker safety is of paramount importance," he said. "For too long, though, an eroded culture of safety in the industry has led to unsafe conditions, injury, and death, with developers insulated from responsibility for these tragedies. Requiring a uniform baseline amount of safety training is a long overdue and critically important measure toward having a tangible impact on worker’s well-being and beginning to correct the culture of the industry, restoring the safety of those who build this city as the top priority."