Line In The Sand: The 40 Calories Per Square Centimeter Dilemma 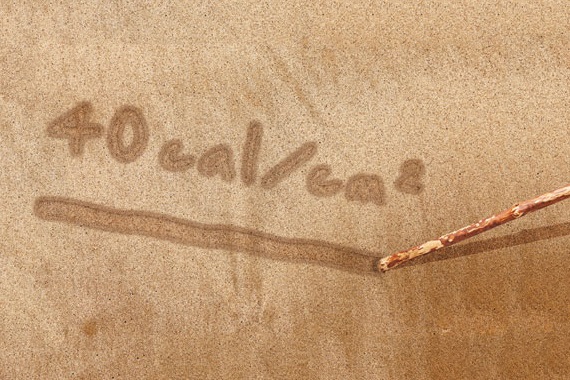 It’s the same old story. An arc flash study was just completed, and the calculated incident energy exceeds 40 calories per square centimeter (cal/cm2) in many locations. When this happens, people often just shake their head and ask, “Now what do we do?”

When this value is exceeded, it is often treated like an absolute go/no-go threshold and can trigger many different responses and comments that are not always correct. Above 40 cal/cm2, arc flash labels may have the statement “No PPE Available.” There may be comments such as, “Above that value, the blast pressure will kill you.” My favorite sensationalized comment that I have heard is, “Above that level, PPE just preserves the body.”

Time for a little arc flash fact checking. “No PPE Available?” The available arc ratings of personal protective equipment and protective clothing are continually pushing the envelope. Some ratings can now exceed 100 cal/cm2.

What about the blast pressure argument? An arc flash may result in a pressure wave, and it could be significant given the right conditions. However, the blast is actually dependent on the short-circuit current and the rate at which the energy is released. Simply stating it is a function of an incident energy above 40 cal/cm2 can be misleading.

What about PPE preserving the body? I won’t bother with that one, although I did ask a large group recently how many of them have heard that statement. Everyone raised their hands and chuckled.

So why has there been so much confusion surrounding the number 40? For a better understanding, let’s back up a few steps. For many years, incident energy above 40 cal/cm2 has been widely considered a threshold where energized work should be avoided. In that case, just de-energize and place the electrical equipment into an electrically safe working condition.

The significance of 40 comes from NFPA 70E and is currently found in 130.7(A) Informational Note 3 of the 2015 Edition: “When incident energy exceeds 40 cal/cm2 at the working distance, greater emphasis may be necessary with respect to de-energizing when exposed to electrical hazards.”

The severity of an arc flash is defined by the prospective incident energy and is normally determined by performing an arc flash study. The Standard IEEE 1584, IEEE Guide for Performing Arc-Flash Hazard Calculations, provides the equations used for the calculations usually performed with arc flash software. Two of the most important variables in determining the incident energy are the available arcing short-circuit current and the duration of the arc flash, which is normally defined as the time it takes an upstream protective device to operate.

This means that a lower magnitude arcing short-circuit current could result in an unusually long protective device clearing time determined from the device’s time current curve. The result is a very large calculated incident energy, often exceeding the 40 cal/cm2 threshold. Unfortunately, the total incident energy is not always a good indicator of whether the arc flash would result in significant blast pressure.

There are many areas in the 2015 edition of NFPA 70E that emphasize placing electrical equipment in an electrically safe working condition. This is always the best option when an electrical hazard exists, regardless of whether the incident energy is above or below 40 cal/cm2.

Although the 2018 edition of NFPA 70E has not been finalized at this time, all signs indicate the confusion surrounding 40 cal/cm2 is about to take a big step towards being cleared up. How?

It appears the Informational Note referencing 40 cal/cm2 that has been the "line in the sand" for so many is about to be washed away, i.e., deleted. Why? Consideration should always be given to placing electrical equipment in an electrically safe working condition, and not just because the incident energy is greater than 40 cal/cm2.