Home Automation: There's an App for That 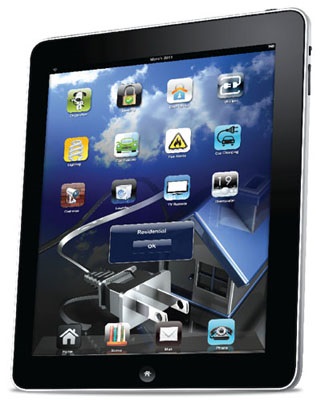 Just a few years ago, home automation control systems were seen as toys for the tech-savvy rich. Push-button window treatments, camera-monitored security and lighting scene-setting capabilities all were seen as extravagances—and, in many cases, each was individually controlled. Today, that same technology is becoming affordable for the rest of us, and even better, manufacturers are integrating controls, so operation can be handled through a single mobile device, and yes, there's an app for that.

Come together
As proof of the convergence of these varied technologies, you need look no further than the annual lineup of trade shows making headlines every January. The International Builders’ Show (IBS), Consumer Electronics Show (CES) and Detroit Auto Show each are closely tracked by national media, and exhibitors at all are eager to promote the latest gadgets in their respective markets. This year, though, it seemed as though the three events had blended into one. Lockmakers were holding press conferences at the electronics show. Electric-vehicle chargers shared a spotlight at the builders’ show. And, everywhere, electric utilities and applications-marketers were making the rounds, even at the auto show.

“It’s all part and parcel with the digital convergence we’ve been witnessing over the last several years,” said Steve Koenig, director of industry analysis for the Consumer Electronics Association. He said that the move of home automation into consumer-retail sales channels signals rapid growth is about to occur. “That’s always been a marker of when a technology has reached critical mass. You can bet the market is really going to expand.”

Certainly the coolness factor plays a part in this anticipated growth, but consumers also see financial incentives. A rising interest in energy management is making homeowners aware that control systems offer more than just parlor-trick convenience. They also offer new ways to cut utility bills. Koenig moderated a discussion panel at this year’s CES, with appliance maker Sub-Zero and NRG, a Princeton, N.J.-based electric generation and retail sales holding company. Neither company had previously attended the show, but both had plenty to say about how energy conservation was beginning to motivate consumers.
“In the past, [controls] centered on entertainment,” Koenig said, noting how this emphasis has turned to energy-saving strategies. “Saving money on utility bills really gets consumers’ attention. Back in the boom years, we were all living large. Now everyone is having to do more with less.”

Cutting the wires
Another major trend in the development of the home automation controls market is the growing adoption of wireless technology. Once the exclusive toys of early adopters, home wireless networks have become almost ubiquitous, and home-product manufacturers now are building connectivity into everything from washing machines to door locks.

Parks Associates, technology market-research group, has documented this evolution in sales charts, indicating a 400 percent growth in annual wireless home automation hardware revenue between 2007 and 2010. Moreover, 2010 revenues for this equipment, which Parks pegs at $1.077 billion, have pulled almost even with those of traditional, professionally installed hardwired equipment and are anticipated to take the lead in the controller market this year.

“We estimate that just over 20 percent of households in the U.S. will have some form of electronic control system by the end of 2015,” said Bill Ablondi, a Parks Associates technology market analyst. “That’s up from 8 percent at the end of 2010.”

“These [advanced metering] infrastructures can work with in-home control systems to help utilities manage demand during periods of peak load,” he said.

Some consumers already understand the benefits of remote monitoring, according to Ablondi. For example, he said home-owners with an existing, externally monitored security system have recognized the value of this capability.

“Adding the ability for them to also monitor their homes themselves is merely an extension of an activity with which they are familiar,” Ablondi said.

Many such systems also integrate some degree of lighting control, again providing insight into the advantages such control can provide.

While Ablondi sees application-specific functionality as a good first step for manufacturers entering the home automation market, he warns against too much emphasis on proprietary protocols and functionality.
“The ability to interconnect control systems acquired separately will be critical to widespread adoption,” he said.

Bringing information together
Fortunately, manufacturers are beginning to understand that consumers don’t want to keep track of multiple remote controls and learn multiple commands and interfaces. Schlage, known for its lock products, incorporated this lesson into its new LiNK system. Introduced in 2009 and since expanded, the line brings together security, lighting and temperature management under a single, remotely addressable control. The product’s crossover appeal was proven in appearances at both the CES and the IBS.

At the heart of the LiNK line is a Z-Wave “bridge” device, which connects to a home’s existing wireless router and translates Internet-delivered commands into Z-Wave-protocol radio frequency signals. A starter kit includes the bridge, along with a digital push-button door lock, similar to locks one might see in a small commercial office building. Add-on devices include plug-in lighting-control units, web cameras and digital thermostats.

While the system lacks the kind of wall-mounted touch panels a custom home-automation installation might have, customers can use a portal-like application on their computer or smart phone for similarly comprehensive control. The functionality is pretty impressive. For example, users can provide dog walkers or cleaning services with single-use or time-constrained security codes, and then receive text alerts when those codes are activated. Connected web cameras can record the activity. Schlage charges a monthly fee—currently $8.95—for these services.

Selling solutions, not products
As further proof that Schlage is cutting across traditional building-product boundaries, the manufacturer is marketing the various devices through electronics retailers, such as Radio Shack and Best Buy. To Utz Baldwin, CEO of the Custom Electronic Design and Installation Association (CEDIA), this kind of brand extension illustrates how both manufacturers and the professionals who install their products need to take a bigger-picture approach to addressing their customers’ needs.

“We used to sell products, but today, all of those boxes are simply tools to deliver an application,” he said.

However, that piecemeal approach could be disastrous once those products become widely available through retail channels. Instead, systems experts need to prove their worth in how they put those products together to fulfill a need, not a shopping list. After all, Baldwin said, when you go shopping in the hardware aisle, “You’re not really buying a drill bit. You’re buying a hole.”

Of course, there are many varieties of holes consumers are looking to drill when it comes to home automation. Energy savings, security, entertainment and simple convenience all are reasons consumers are turning to this expanding market of products. Manufacturers and service providers, themselves, seem to be having trouble addressing all these needs under a single umbrella. For example, Verizon now is testing home automation services, but has them split into separate security monitoring and energy management offerings, branded under the company’s FiOS fiber optic broadband network. The system will depend on the same Z-Wave protocol Schlage is using and provide remote access through a smart phone or computer, along with in-home access using a FiOS-connected television interface.

With no single-source, off-the-shelf packages available, some consumers may attempt to address these issues themselves.

“If devices can simply be plugged in, you’re going to find a large number who do it themselves,” Baldwin said.

But this still could lead to a cacophony of chirping alerts and smart-phone beeps that could drive those homeowners to a single source that can bring all these systems together.

“There has to be a user interface beyond the meter to communicate with the consumer in the home,” Baldwin said. “Right now, everybody who’s creating products for this space all have their own user interface, and this is where the integrator comes in.”

Opportunities for ECs
Electrical contractors can play an important role in this process, Baldwin said, but gaining a foothold in home-systems integration could require some education. Using power line communications, for example, many devices can be installed without the need for added low-voltage wiring.

“There are many products today that make it easy for an electrical contractor to begin carrying these services,” he said, though even the most experienced electrician may need some extra training. “You’re not distributing power. You’re distributing signals. It requires a whole different level of systems familiarity.”

Even more than technology expertise, electrical contractors pursuing home automation business also may need to look at how well they are able to work within a larger team. Baldwin points out that contractors working to integrate home automation equipment must interface with every other trade in a building team, from the beginning of a project to its completion and beyond. And they will be the first person a homeowner calls with operational problems and concerns.

But, with this challenge comes opportunity, said CEA’s Koenig. Because of the home-wide impact automation technologies can have, their installers can become more than just another subcontractor to the builders with whom they’re working.

“They have an immediately larger value-add,” he said, because they can participate in sales conversations. “It becomes more of a partnership. More builders are going to want to work with them.”