The Changing Face of TV 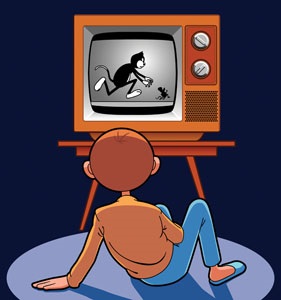 Nothing is sacred in the digital age. Innovation is the driving principle. The operating mindset is to strive for quality, speed and efficiency.

Along those lines, it was only a matter of time before the Internet set its sights on the TV. Despite all the technological advances and new devices that have entered our lives, a TV is still a must-have.

On the other hand, computers long ago staked their claim as an integral part of the household, too. However, they typically lack the comfort of a sofa and living room, and that’s where the TV comes into the, ahem, picture.

Not surprisingly, consumers get it. Mike Krell is secretary of the WiMedia Alliance, San Ramon, Calif., an organization whose members manufacture ultra wideband wireless technology. According to him, the big question right now is, “How do I get to the best screen in my house?” He added, for anyone who doesn’t know it, “the best screen is the big-screen TV.”

Any forward-thinking person can see the trend toward a future in which families don’t just sit around the TV to watch shows and movies. While they will still sit around it, for better or worse, they may also do many, if not all, of the things that they now do on the home computer.

Of all those activities, the one thing people do more than anything else, and the one the industry is hoping they will want to do on their TV screen, is surf the Internet. This may not do much to break us of some of our more sedentary tendencies. At least in the old model, we had to expend some energy going from one room or device to another.

But this trend has nothing to do with fitness. It has everything to do with ease of use and the desire for the optimal experience on our digital devices—that and the ever-expanding reach of the World Wide Web.

We can thank Netflix for much of this phenomenon. The company has done a number of things to revolutionize the way we watch movies. First, it put the neighborhood video rental shop out of business. Then came streaming video, which took the Netflix service model to a whole new level. A person doesn’t even have to wait for the movie to arrive in the mail. Movies and TV shows can be ready to watch on demand in about as long as it takes to click a mouse and download. The only thing that can slow this trend down is bandwidth, or the lack thereof.

Add YouTube to this dynamic, and the trend lines become more clear. It popularized what the industry calls “over-the-top video” by capitalizing on the Internet’s universal access and, in the process, catapulting home movies into a new dimension.

If this still doesn’t tell the story, throw in online gaming, and the picture should be complete. The point is the Internet isn’t just about websites anymore. It’s about watching movies on demand, browsing videos, playing games with friends, and experiencing various other forms of entertainment. If only all of this could be done on an HDTV.

The one thing the high-tech industry’s collective genius has yet to figure out is how to complete this convergence by seamlessly combining Internet connectivity with the quality viewing experience today’s HDTVs provide.

There is a way, to be sure; it’s just not seamless. For now, the best way to bridge the gap between Internet and TV is through a wireless home network. A person can stream a video from Netflix, for example, then send it over a wireless signal from the computer or laptop to a set-top box.

The typical setup has a few essentials, including a broadband connection to get the Internet into the home, a computing device (laptop or desktop), and a TV. The setup would also include a wireless router to send the signal and, typically, a gaming console, such as the popular Xbox from Microsoft, to include it and pass it on to the TV.

Other devices facilitate this wireless connection. For example, Blu-Ray players are now wireless-equipped.

The Roku box is another new product that fills the niche, and it is going for less than $100, a fraction of the cost of other devices. Manufactured by a company of the same name, it looks like a hockey puck and fits neatly in the palm of your hand and equally well on top of the TV.

The connection is simple. Plug the Roku into the wall for power, and connect it to the TV with an HDMI or audio/video cable. With the usual hardware and connections—computer, router and high-speed connection—the setup is done.

A variety of online channels, such as Netflix, are programmed into the device, so Roku owners can watch Internet programming, movies, and TV shows on website channels such as Hulu, Vudu, Crackle, Disney and even Amazon. There are channels for gaming and live sports. For news and information, some major networks and the Wall Street Journal have created live-broadcast Internet channels.

Like most niche devices, Roku does not stand alone. Apple TV works precisely the same way and is about the same cost. Internet channel programming is also similar.

The set-top boxes may have made the transmission of Internet content to television set simple enough, and Apple and Roku have certainly kept the costs low. Still, the techno-inquisitive may ask, why not do without these devices altogether? Not surprisingly, the question has been considered.

Cutting out the middle man with evolution
The smart TV takes convergence a step further by enabling many computing functions on the television set. The most recognizable example of this is Google TV.

Unlike Apple TV, Google TV is not a device. It is an operating system and a browser—Google Chrome—that are incorporated into the set. Currently, the smart Sony Internet TV is the only one on the market that comes equipped with the Google TV system.

With Google TV, the Internet giant is not just expecting people will want to surf the Internet as much as they want to channel surf. Less explicitly, the system is also based on another Internet theme—free. More specifically, free TV programming.

Driving much of the convergence between Internet and TV is the Internet’s ability to deliver things for free that once were not, coupled with the realization that watching TV in the new millennium is much more expensive than it was in the days of three major networks, public television and a set of rabbit ears.

The big question is whether it will work. Will TV programming, content delivery and viewing lend itself to the Internet way of doing things?

This is where the problem comes in. As one might imagine, this trend would result in an industry shift of tectonic proportions. Huge sums of money are at stake. The process of change unleashed by Netflix has triggered a monumental re-evaluation of business models by movie studios, cable and satellite dish providers, cell phone companies, websites and other titans, all of whom have a stake in the process that controls the creation and distribution of content through traditional TV and over the Internet.

Perhaps the smartest people in all of this are the consumers. According to Keith Nissen, a principal analyst with the Scotts-dale, Ariz.-based market research firm In-Stat, 22 percent of broadband U.S. households have a TV set that can be connected to the Internet. Clearly, they are ready, but until the content is there, they will not make the jump. Last year, of the 22 percent who owned these TVs, less than half actually connected.

One thing is clear: the Internet has yet to displace traditional TV. So-called cord cutting—consumers abandoning their cable or satellite subscriptions for the Internet—has yet to occur widely and may never happen.

On a basic level, anyone in the business of providing any kind of electrical service to the home should know for what homeowners are going to use that electricity. More specifically, it’s imperative for an installer to be familiar with the latest trends in consumer electronic devices and in-home entertainment.

Admittedly, many of the previously mentioned devices would not require professional installation in most, if not all, instances. However, supporting utilities would. On the one hand, to the extent that the demand for Internet TV grows, it will sustain the need for a powerful and reliable Internet connection in the home that can deliver all of the streaming video and other multimedia Internet content that the household will want to view on an HDTV. That content will have to be delivered over an equally reliable network to multiple rooms and devices in the house. Along these lines, broadband service to the home is now almost a given, but getting that signal to the TV may require networking considerations in many households that do not already have in-home networks, wired or otherwise.

Furthermore, all this computing and technology relies on a clean, uninterruptible power supply, which definitely falls into the realm of electrical construction.

On the other hand, if Internet TV is not going to lead to any cord-cutting on a massive scale, suffice it to say that demand for delivery of traditional TV, whether it’s through cable or satellite, will also not diminish.

Considering an equal demand for both mediums, one likely scenario is that the industry and consumers, more than anything else, will need to learn how to make the technology coexist under one roof. This scenario, of course, has wiring implications as households may be more inclined than ever to consider the best location of cabling, access points, devices and power for the optimal integration of TV, the Internet and all of their entertainment devices.

For most consumers, it is a question of keeping things simple.

“Only a small percentage of people are tech-savvy,” said In-Stat’s Nissen. What they need, he said, is a simple plug-and-play solution, one that gets “the Internet to the TV set in a way that is not technically complicated.”

If that’s all that is needed, then it really is only a matter of time. If you don’t believe it, just look to your smartphone. The cellular industry has combined mobile voice services with personal computing in a way that is intuitive and mass-marketable. That accomplishment is the goal for Internet TV, and it has set a precedent for potential and possibility.