When Everyone Has Gone Home: Exterior lighting control guidelines 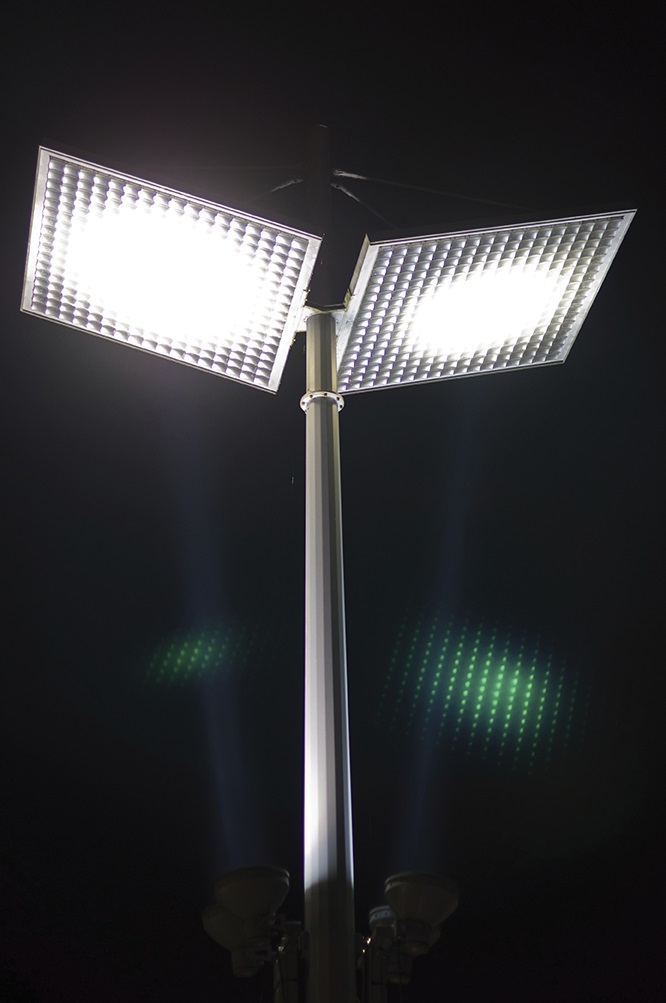 ASHRAE/IES 90.1 2010, the national energy reference standard, requires building exterior lighting to be turned off and/or reduced when not in use. The goal is to save energy by ensuring exterior lighting is only used when needed; lights that are required to remain on for security after normal business hours must be dimmed. As a result, manufacturers have developed a range of products to satisfy this provision, and they can be used in new and existing construction projects.

Turning exterior lights off when they are not needed is nothing new. A time-based or photosensor control typically switches dusk-to-dawn luminaires. Facade and landscape lighting, which serve a purely decorative purpose, must be turned off during the night using a time-based control. Energy codes typically require time switches to be able to retain their time setting and programming during a loss of power lasting at least 10 hours.

What is new is the idea of reducing light and power levels after normal business hours for exterior luminaires that must remain on all night but are not being used. Demonstrations led by the California Lighting Technology Center (CLTC) and the U.S. Department of Energy (DOE) suggested potential energy savings as high as 75 percent. For example, the CLTC found 40 percent energy savings with bilevel high-intensity discharge (HID) wallpacks compared to uncontrolled HID wallpacks. After replacing the HID wallpack with a controllable light-emitting diode (LED) wallpack, the CLTC reported an additional 30 percent savings.

The approach is compatible with all common light sources used in exterior lighting. Basically, it requires that lighting power is automatically reduced at a certain time of night, the light and power level is restored based on after-hours occupancy, and the luminaire returns to its energy-saving dim state after the area is vacated again. The luminaire itself requires either dual circuiting (allowing bilevel switching) or a dimmable ballast or driver (allowing continuous or stepped dimming). Dimming is often preferable because it ensures uniform light-level reduction and enables single-lamp luminaires—such as LED, HID, induction and plasma—to reduce.

A time-based control, such as a time-clock/lighting control panel or device installed within the luminaire, provides the capability of scheduled reduction. An occupancy sensor, installed remotely from or on the luminaire, provides occupancy-­based control. Remote mounting provides opportunities for optimal placement (if the application needs it) and the ability to control multiple luminaires. The control system may be centralized (networked to a central control point) or stand-alone (each luminaire controlled individually or in groups).

The occupancy sensor may use passive-­infrared (PIR), ultrasonic, microwave or camera-based technology to detect occupants. Of these, PIR is most common, though note that it requires a line of sight between the sensor and the occupant. Newer, camera-based sensors offer intriguing potential to reduce false-positive triggering from objects, such as tree branches, and specialized coverage patterns, such as squares. The coverage pattern may be related to the mounting height (8–40 feet for PIR). The sensor should be rated for use in exterior environments. Devices may communicate using powerline, low-voltage, digital low-voltage or radio waves (radio- frequency wireless).

The sensor bilevel output may be switching or dimming. Dimming occurs between a designated high setting, typically full output during normal business hours, and a low setting, typically 30–70 percent of rated power. For HID, induction, plasma and fluorescent luminaires, the low state may be available in a limited range. For LED, dim levels may be available across a broad range. Some sensors allow light output to ramp/fade over a period of time to avoid a sudden change in light level. Centrally managed digital and radio frequency wireless control systems that feature remote programming enable calibration settings to be fine-tuned in order to optimize savings and respond to user complaints.

As another example, the DOE replaced high-pressure sodium with bilevel LED luminaires in a parking garage at the U.S. Department of Labor. The LEDs generated 52 percent energy savings, which were increased due to the use of the occupancy sensors with bilevel control. The sensors reduced power to 10 percent after a time delay of 2.5 minutes. Despite some false-tripping of the lights, there were no user complaints or other problems. The approach was projected to pay for itself in 4.9 years (new construction) and 6.5 years (retrofit, mostly due to the higher cost of LED technology).

In another demonstration project, the DOE collected data on four early installations of bilevel LED luminaires, finding energy savings ranging from 19–74 percent. Note that one project failed. After some analysis, it was theorized that wind, which made tree branches move near the sensor, was the culprit. Other lessons learned included selecting products properly rated for exterior environments, proper design, ensuring multiple controls do not overlap, and dedicated commissioning at the outset.

The Better Buildings Alliance recently published exterior lighting control guidelines that feature this approach in detail. It can be downloaded for free at www4.eere.energy.gov/alliance/activities/technology-solutions-teams/lighting-electrical/exterior-lighting-controls-guidance.