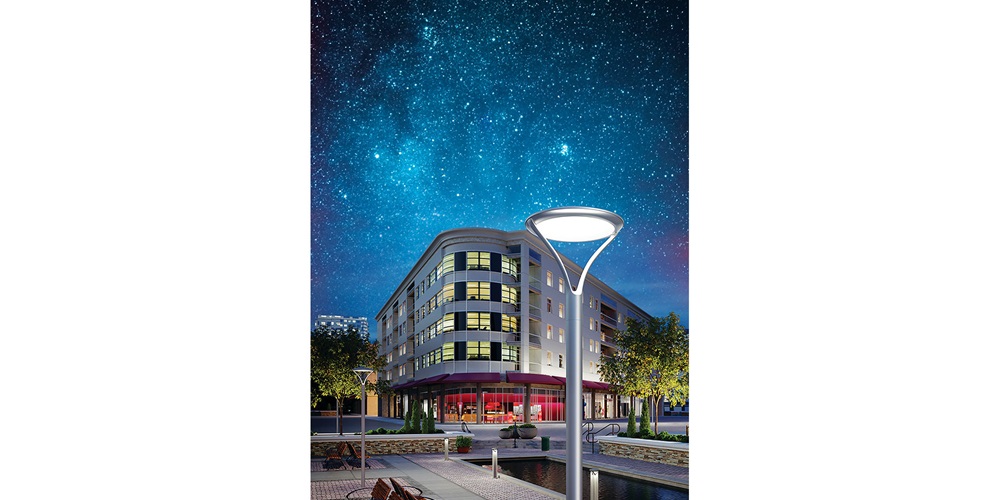 The source of light pollution and its solutions have changed as outdoor lighting technology advances. While the effort to preserve the night’s dark skies and prevent light spillage into neighboring property has been underway for decades, the conversation around how to do it is evolving.

The amount of artificial light aimed skyward has increased in radiance by 2% every year for the past four years, according to a 2019 global study led by members of the GFZ German Research Centre for Geosciences. The blue light emitted by LEDs is largely the culprit.

Excess light affects simple aesthetics such as being able to see the stars and also upsets people’s lifestyles and the health of wildlife, Peter Strasser, technical director for the International Dark-Sky Association (IDA), Tucson, Ariz, pointed out.

Traditionally, shielding fixtures and dialing back “overlighting” have been the best strategies to fend off light pollution, whether the source was street lamps, sports fields or architectural fixtures. Recently, lighting designers and technology providers have focused on the impact of LED lighting color. One way the industry gauges how much glow is in the sky or how much spills over into other properties and neighborhoods is using correlated color temperature (CCT). For some communities, lower-impact yellow or warmer-colored lights provide the antidote to the more common blue lights of the recent past.

The growth is due to the relatively greater efficacy, longer life, improved optical control, better light quality and greater dimming capabilities of LEDs. However, LEDs are colder or bluer in light, which causes some issues with light pollution.

Although it is not something that can be fixed with a single solution, efforts are underway across the world to reduce light pollution. The notion of a dark-sky initiative is that an outdoor space can have excellent lighting and still have dark skies, Strasser said.

One way is to promote darker skies as a desirable outcome. Some cities, communities and parks have been designated as International Dark Sky Places (IDSPs), where the lights must be lowered at night. There are some 150 designated IDSPs today and counting. This has led to astrotourism, where travelers can have space-related experiences.

“It’s been a way to spread the good design principles of a dark-sky community,” he said. Tucson is a case in point, which shifted to LED lighting in its 20,000 streetlights to save $180,000 in monthly energy consumption as well as reduce its lumen output.

In the meantime, the IDSA, along with the Illuminating Engineering Society (IES), New York, developed five principles for responsible outdoor lighting: it must be useful, targeted, controlled, have low light levels and use warm colors.

Identifying light pollution is an evolving problem, Strasser said, adding that people have gotten used to it as a result of years of spillover lighting into the sky.

“No one sought to obscure the sky; it just sort of happened,” he said, adding that, among lighting companies, installers and building owners, often “there is a huge swath of the population that thinks if it’s not glaring, it’s not safe.”

Lighting designers are well acquainted with outdoor lighting strategies, focusing on what they are trying to illuminate instead of flooding an area in light. That results in properly placed, focused lights that enhance textures and architectural details. However, every project can’t afford a designer, so often the engineers and electrical contractors plan much of the lighting.

Electrical contractors should consider the spillover of excess light. Strasser said that the 30% of light that goes skyward is wasted resources.

“The idea is to put the light where we need it,” he said. “Our recommendation is to follow the IES recommended practices. If everybody did that, we would have a much better view of the sky and would be saving a lot of energy.”

Electrical contractors can search the IDA’s website database by product, application and color temperature, as well as find links to manufacturer specifications.

“The pace of change is phenomenal” when it comes to creating warmer, dark-sky-friendly LED lighting, Strasser said.

Such warmer lights feature a short wavelength emission that causes a warm glow. The lower the blue levels, the better.

LEDs deployed in previous years are grossly overlighting their streets; they were chosen for their relative efficiency, not considering other factors.

LED efficiency has been a boon to cities, building owners and others who pay the lighting bills. In fact, LED fixtures provide typical energy reductions of 70% over the products that they replace, making them attractive both financially and environmentally, Gibson said.

“[LEDs’] small size makes them more controllable, allowing the use of advanced optical designs to provide superior illumination where it is needed while minimizing light trespass outside the target area,” he said.

While he agrees that blue light from electronic devices and outdoor lighting during nighttime periods can be adverse, the good news is that newer outdoor LED lighting is available with warmer CCTs that have significantly less blue light.

LEDs have provided a solution to some very particular problems. Blue light can obscure the view of the sky and can affect human health and wildlife. For instance, blue light in sea turtle nesting areas can confuse hatchlings and prevent them from heading into the ocean after hatching.

“We have luminaires available in monochromatic amber that are approved by the Florida Wildlife Commission specifically for use in those sea turtle protected areas,” Gibson said.

The company claims its Lithonia Lighting product lowers outdoor light pollution with its optical control. Advanced controls such as nLight AIR allow the luminaires to be trimmed to meet site-specific needs and dimmed during periods of nonoccupancy, which is typical of outdoor lighting.

As in all cases, picking the right tool for the job is critical to success, Gibson said, adding that, “our overall goal is to create cost-effective lighting solutions that meet the needs of the occupants while complying with local and national codes.”

In general, installers can achieve superior uniformity, with minimal light trespass and low power density by selecting luminaires with the best photometric control. Energy savings can be further increased by about 50% by selecting lighting with wireless embedded controls.

Blue light can obscure the view of the sky and it can impact human health and wildlife. For instance, blue light in sea turtle nesting areas can confuse hatchlings and prevent them from heading back into the ocean after hatching.

“We’ve advanced efficiency (measured in lumens per watt—lm/W) by 30–40% over the last five years,” she said, adding that Eaton offers solutions that provide up to 127 lm/W. “We help our customers achieve dramatic energy savings of 70%, compared to equivalent traditional light fixtures.”

Eaton has been developing its own solutions for reducing sky glow, Rivas said.

“Light pollution is something customers are concerned about, and our products address it,” she said.

“Not all LED products measure up in terms of efficiency and light quality, even when lumens per watt ratios are similar or equal,” said Husnain Fareed, Eaton regional sales manager.

Eaton’s crossfunctional teams develop products that improve the environment, ease of operation and maintenance, safety and installation, as well as efficiency and reliability, he said.

“There are many parameters to address that are impacted by light pollution,” including application scenarios, operational safety, reliability and maintenance objectives, enhanced efficiencies and community concerns, he said.

Deployments that are dark-sky-friendly by design can help, but they only partly solve light pollution challenges, according to Fareed and Rivas.

“Fundamentally, every lighting scenario is unique and lighting pollution does need to be considered,” Rivas said.

So, while lighting designers have technology available to enhance customer and community experience, these must align with design objectives, Fareed said. As part of that effort, Eaton works with lighting engineers and partners with electrical contractors to develop and install lighting that addresses customer requirements.

There are many ways to reduce light pollution, and the time to address that issue is now, Rivas said. Dark-sky ordinances are being applied across the country to new construction and retrofits, although some such ordinances grandfather in legacy products. LEDs last for a long time, so it’s essential to address light pollution in the design process, rather than following an installation.

“We work closely with electrical contractors to deliver on successful projects,” Rivas said.

SWEDBERG is a freelance writer based in western Washington. She can be reached at claire_swedberg@msn.com.