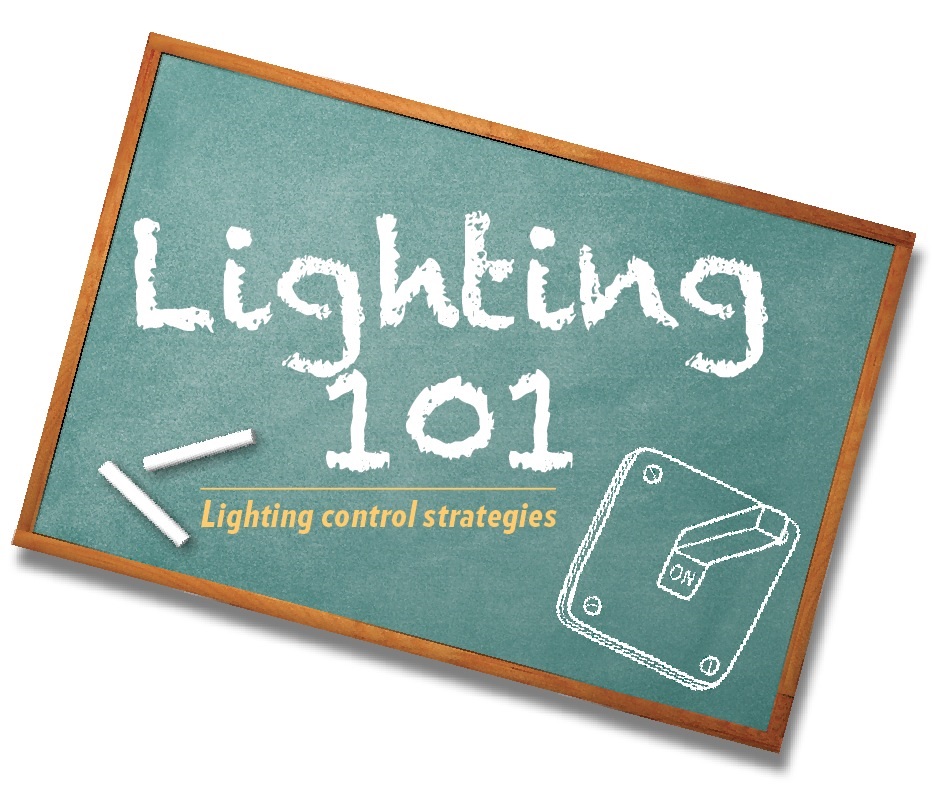 Lighting controls are devices and systems that regulate the output of lamps and luminaires. They either turn the lights on and off using a switch or adjust light output using a dimmer. Growing demands for energy savings and flexibility to support visual needs have given lighting control much greater prominence. In particular, commercial building energy codes are driving demand for more sophisticated, detailed and layered control systems. The digital revolution in lighting control technology has enabled manufacturer solutions to keep pace with these demands.

A good lighting design requires a good controls design. A good controls design, in turn, ensures that the lighting system produces the right amount of light where and when it is needed. Benefits of a good control design include reduced energy costs and flexibility, which can support the user’s visual needs and create a desired mood or ambience. This article provides a brief introduction to how lighting controls work, resulting control strategies and how those strategies are applied to projects.

Manual controls require a person to interact with them. Because the user initiates the control action, it is typically driven by applications involving output being adjusted based on a desire to achieve certain visual conditions. A good example is a meeting space where the lights may be raised to full during face-to-face discussion but lowered in part of the room for an audio/video presentation.

With automatic controls, the input is a signal automatically produced by another component or device, such as a computer, occupancy sensor or photosensor. These components and devices generate signals typically based on time, occupancy or light level. Automatic control is generally driven by energy management, that is, saving energy by reducing or turning off the lights in response to conditions such as lack of occupancy or abundant daylight.

In both cases, the outputs are switching and dimming. Switching may be enacted as simple on/off, though a degree of flexibility may be gained through bilevel or multilevel switching. This allows a choice of two or more output levels from the luminaire or lighting system (in addition to no output) by assigning alternate lamps, ballasts or luminaires to different control outputs. For example, a three-lamp fluorescent luminaire may be configured with a ballast that controls the outboard lamps and another ballast that controls the inboard lamp, resulting in a choice between outputs of 0 percent (off), 33 percent (one lamp on), 66 percent (two lamps on) or 100 percent (all lamps on). Switching is a simple, relatively economical control method well-suited to applications where a limited range of light-output levels is acceptable and where abrupt, noticeable changes in light level will not be irritating or disruptive. A simple example is a device that automatically turns the lights off (or reduces light output) when a space is unoccupied.

Dimming may be continuous or step. Continuous dimming enables light output adjustment across a range, with smooth transitions between each output level, resulting in a very high degree of flexibility to satisfy visual need. It is ideally suited to applications where we need transitions between light levels that are not irritating or disruptive to users. Daylight harvesting in an open office is a good example of where continuous dimming is advantageous. As daylight levels rise and fall, electric light levels fall and rise to maintain a constant light level, thereby saving energy.

Step dimming typically involves one or several output levels with the transition either being abrupt, as in switching, or a smooth fade. Step dimming is well-suited for applications where we want a smooth fade to a preset output level, such as for demand response. It also works for bilevel switching but without changing out alternate ballasts, lamps and luminaires. A good example is light-level reduction in an HID or induction luminaire during times when the space is unoccupied.

The output may be switching or dimming. In interior applications, typically the lights are turned off, though for applications that are intermittently occupied, the lights may be switched (e.g., two fluorescent lamps in a stairwell luminaire) or dimmed (e.g., continuous dim to off in an overhead luminaire in an open office or step dim to a lower level for a high-intensity discharge parking-lot luminaire).

Occupancy sensing is highly suited to smaller, enclosed spaces that are intermittently occupied, such as private offices, classrooms, conference rooms, copy and break rooms, restrooms and other spaces. It is also frequently applied to parking lots and area lighting applications, wallpacks, stairwell luminaires, warehouse aisles, and lighting within or over workstations in open offices.

Time scheduling: This proven strategy involves reducing lighting use during times of the day when illumination is predicted to not be needed. The LBNL estimates average lighting energy savings of 24 percent (lumping it in the same category as occupancy sensing, though it is arguable that occupancy sensing typically results in higher savings by being more precise).

The input for “on” may be manual or automatic, while the input for “off” is automatic, usually combined with a manual on/off override. The automatic input is typically a signal from a physical timeclock, timeclock software intelligence built into a control system, or some other building system, such as a building automation or security system. The output may be switching or dimming, depending on whether some light is needed during unoccupied periods or whether the light source cannot return to full output quickly.

Time scheduling is suited to larger, open spaces that are regularly occupied and spaces that are intermittently occupied but where the lights must remain on all day for safety/security purposes. Local override (time extension) manual wall controls are often installed to allow for irregular use of the space.

Another method related to both time scheduling and occupancy is the timer switch, which turns off the lights if a set period of time passes after a person enters a room. This type of control device is suited to applications such as utility and storage closets.

Daylight harvesting: This strategy involves raising or lowering output to maintain a set light level based on daylight contribution. As daylight rises and falls, the electric lights lower and raise to save energy and provide a consistent light level. Due to the variability of daylight, this strategy can be more complicated to apply to spaces, but lighting energy savings average 28 percent, the LBNL estimates.

Input and output are automatic, though it’s arguable that separately zoning lights near a daylight aperture to a manual switch could be considered daylight harvesting as well. The input measures daylight (open loop) or a combination of electric and daylight (closed loop) using a light sensor. The output may be switching or step-dimming (typically in spaces where switching is less likely to be disruptive, such as in circulation areas) or continuous dimming (typically in regularly occupied spaces with intensive tasks).

As one might anticipate, daylight harvesting is suited to areas adjacent to windows and clerestories and under skylights and roof monitors—wherever outside light is abundant and consistent.

Other strategies: Other options include demand response (reducing lighting during certain times of day or in response to a utility request during an emergency grid event) and institutional task tuning (reducing lighting by task areas across a large space designed to a single light level). The LBNL estimates task tuning saves an average of 36 percent lighting energy. The LBNL further estimates that combining any of the above control strategies produces average lighting energy savings of 38 percent.

Combining strategies: Many projects require a layering of control strategies in the same space to satisfy different energy code and owner requirements. For example, in an open office, time scheduling may be layered with manual control (for local override of the schedule) and daylight harvesting. Advances in digital communication technology enable multiple strategies to be combined economically, with multiple devices attached to the same control points using a single low-voltage wiring bus.

In existing buildings, owner needs and economics drive this choice of control strategies. In new construction, commercial building energy codes are the primary driver, establishing a set of mandatory strategies that must be implemented (see page 70 for some examples).

Control strategies can be conceptualized and communicated using a written control narrative and control zoning plan. Also called the basis of design, the control narrative describes the lighting control system, including a sequence of operations, or description of system outputs in response to various inputs for each control point. This document provides a roadmap for the control strategies that will be implemented in each space or space type.

The control zoning plan indicates which lighting loads will be assigned to which control strategies/controllers. This document bridges the conceptual and finished design, providing a visual or text-based description of how each luminaire in the project is controlled.

By thinking about lighting controls in terms of strategies based on inputs and outputs, specifiers can be strategic about application, which allows them to engage clients in discussion and decision-making based on their needs before even considering hardware. Once control strategies are decided, these hardware choices become relatively simple because they will flow from the choice of strategies.