Evolution of AFCIs and the <i>NEC</i> 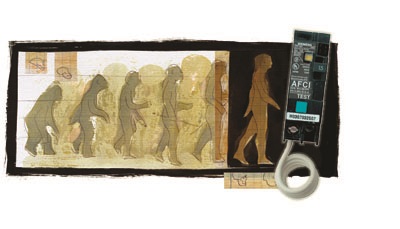 ARC-FAULT CIRCUIT INTERRUPTERS (AFCIs) first made their appearance in the National Electrical Code (NEC) in 1999, with a mandatory effective date of Jan. 1, 2002. Research—conducted by Underwriters Laboratories Inc. (UL) for the U.S. Consumer Product Safety Commission (CPSC) and released in a report titled, “Technology for Detecting and Monitoring Conditions That Could Cause Electrical Wiring System Fires”—indicated that arc-fault detection was a promising way to further reduce the risk of fire beyond the scope of conventional fuses and circuit breakers that protect branch circuits.

As early as 1998, UL and the National Electrical Manufacturers Association (NEMA) began working with manufacturers and other interested parties to develop a safety standard for AFCI products. The end result was UL Standard 1699, which defines the five types of AFCIs and their performance requirements. They are the following:

The CSPC, UL and the National Fire Protection Association (NFPA) conducted various studies during the 1980s and 1990s, either separately or as joint ventures, which led to the inclusion of AFCIs in the NEC. According to the CPSC’s 1992 “Home Electrical Systems Fire Project,” problems in home wiring, such as arcing and sparking, are associated with more than 40,000 home fires each year, which claim more than 360 lives and injure 1,400 people. In 1994, there were an estimated 42,900 fires in U.S. homes caused by electrical-distribution equipment.

“It was the CPSC and NFPA providing statistics on the origin of fires in residences and recognizing that fires were originating in branch circuits and branch-circuit wiring that challenged the electrical industry to include AFCI protection in the NEC in an attempt to reduce those fires,” said Mark Ode, staff engineering associate in the regulatory services department at UL.

AFCIs and their goals

“The AFCI is a device that monitors current traveling through a circuit and that trips when an abnormal waveform is detected that could mean an arc or spark,” said Thomas Domitrovich, product manager at Cutler-Hammer/Eaton Corp., Moon Township, Pa. AFCIs detect arcing faults and open the circuit to stop the flow of electricity.

“The exception is when the AFCI device is located within 6 feet of the branch-circuit overcurrent device, as measured along the branch-circuit conductors, if the circuit conductors are installed in a metal raceway or a cable with a metallic sheath,” Ode said. Bedroom circuits were initially chosen for AFCI protection in new construction because fire statistics indicated that most people die in fires in the bedroom and those circuits typically have the longest runs to the load center.

“There are all sorts of appliance cords in bedrooms, which can be abused, making bedrooms the most logical place to start including AFCI protection,” Vaughan-Birch said. As the technology matures and if AFCI devices demonstrate that their presence reduces the number of residential fires and deaths, it is logical to assume that mandates for their inclusion in other rooms in the home will grow.

CPSC staff believes that AFCIs should be considered for added protection in other circuits and for existing homes as well.Although visually similar to GFCIs, which are designed to help protect people from electrocution, AFCIs help protect wires or devices from catching on fire or melting down.

According to Ode, AFCIs were designed and tested to recognize the unique characteristics of an arcing fault and trip when these faults are detected. However, there is ground-fault protection built into AFCI circuit breaker devices and that tripping level will vary depending on the manufacturer.

There are a few procedures an electrical contractor can perform to prevent such potential nuisance tripping, such as checking that the load power wire, panel neutral wire and load neutral wire are properly connected, checking wiring to ensure that there are no shared neutral connections, and checking the junction box and fixture connections to ensure that the neutral conductor contacts a grounded conductor.

“To verify if you have a ground fault, you can substitute a GFCI circuit breaker in place of the AFCI or disconnect wires from the AFCI’s load terminals, with the breaker in the off position,” Vaughan-Birch said.

In the long run, nuisance tripping of AFCIs will be avoided by continued design changes and refinements, according to Domitrovich.

“AFCIs will operate with less nuisance tripping as manufacturers learn about the various application issues that exist in the real world and conduct research on tripping incidents,” he said.

Changes in the NEC

The NEC is developed and periodically reviewed by more than 5,000 volunteer committee members with a wide range of professional expertise. These volunteers serve on more than 200 technical committees and are overseen by the NFPA Board of Directors, which also appoints a 13-person Standards Council to administer the standards-making activities and regulations. The 2005 NEC now includes an added requirement for the installation of a combination arc-fault device in dwelling-unit bedrooms, which will become mandatory on Jan. 1, 2008. These combination devices will protect against both parallel and series faults and will also detect a lower value fault of about 5 amperes.

Tentatively accepted for the 2008 NEC is a requirement that all 15- and 20-amp, 120-volt circuits in the home be protected by AFCIs, according to Dave Dini, senior research engineer at UL. The proposed change in Section 210.12 has recently been sent out by NFPA for public comment and in December 2006 the Code Panel will review the received comments and decide whether to accept the all-home proposal.

There have been claims that AFCIs do not do what they maintain or that they nuisance trip. While there have been some cases where AFCIs have tripped due to frequency noise, all manufacturers have been very active in working with the contractor or homeowner to correct the issue in a short time frame.

“No one may ever know how many fires were reduced or lives saved because of the use of AFCIs, and statistics that show that fire origins are either reduced or eliminated by these protected branch circuits may take years to develop, but they are in fact a safety device worth using,” said Ode.  EC

All 120-volt branch circuits supplying 15- and 20-ampere outlets installed in dwelling unit bedrooms shall be protected by a listed arc-fault circuit interrupter, combination type installed to provide protection of the branch circuit.

A point on the wiring system at which current is taken to supply utilization equipment. (Article 100 Definition)

The NEC requires that all 120-volt, 15- and 20-ampere outlets in bedrooms be AFCI-protected, whether they are for receptacles, luminaires (lighting fixtures), ceiling fans, hard-wired smoke alarms or other utilization equipment. With 240-volt equipment such as baseboard heaters and through-wall air conditioning units, it isn’t required by the Code to have AFCI protection. It’s important to realize that there is no exception for self-contained residential smoke alarms (often these are erroneously called smoke detectors). The wiring that supplies these devices can also experience arcing faults that create fire hazards. For this reason, branch circuits supplying hard-wired smoke alarms in bedrooms require the same protection as other bedroom branch circuits.

But, since smoke alarms have battery backup power, there’s no danger that operation of an AFCI will leave a bedroom without smoke alarm protection.

Arc-fault circuit interrupters are designed to prevent a type of electrical hazard that conventional overcurrent protective devices don’t guard against very well. An example would be a frayed lamp cord that exposes the copper wire inside, creating a low-energy electrical arc to some other piece of nearby grounded metal. AFCIs protect against the following three types of arcing faults (see figure):

These types of arcing faults may not create an overload that will cause a circuit breaker to trip or a fuse to blow. Overcurrent protective devices are intentionally designed with built-in delays that allow a brief surge of inrush current when a motor or microwave oven starts up, without causing “nuisance trips.”

Also, current in arcing faults tends to be low because of the impedance of the arc itself. Both circuit breakers and fuses react fairly slowly to overcurrents of low magnitude. By contrast, an AFCI circuit breaker trips at an arcing current level of only 75 amperes. On arcing faults-to-ground, listed AFCIs are required to trip at 5 amperes; however, most will actually trip at lower levels of around 50 milliamperes.

Even low-energy arcs represent a fire hazard and a threat to life when flammable material is present. Since many fire-related fatalities are caused by smoke inhalation when people are sleeping, bedrooms were chosen as the place to start requiring this new protective technique.