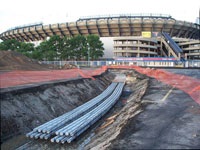 When football fans come to New Meadowlands Stadium in East Rutherford, N.J., they may be more focused on their NFL team—both the Giants and Jets play there—than the mammoth project involved in constructing and powering the building. Two electrical contractors—-Star-Lo Electric Inc., Whippany, N.Y., and Mehl Electric Co., Pearl River, N.Y., together with its sister company Mehl Communications, Township of Washington, N.J.—took several years of labor and hundreds of electricians to deliver a fully powered stadium in time for the 2010 football season.

The $1.6 billion, 2.2-million-square-foot steel and concrete facility features 82,000 seats and 217 luxury suites. It is one of the most expensive stadiums ever built. The project, which covers a 157-acre site, includes 10 parking lots, providing 15,000 parking spaces, and a plaza around the new stadium. The electrical work included power to the stadium and underground utilities for the Giants training facility, stadium site lighting, telecommunications cabling, and lighting for parking lots and ticket booths.

Construction work began in May 2007 to replace the New York teams’ existing facility, Giants Stadium, which was owned by the New Jersey Sports and Exposition Authority (NJSEA). It was home to the Giants from 1976 until 2009 and the Jets from 1984 until 2009. Following the 2009 season, the old stadium was demolished. General contractor Skanska USA Building, based in Parsipanny, N.J., managed the construction of the new stadium.

Throughout the project, the greatest challenge was the schedule between the general contractor and subcontractors, who needed to meet a short deadline that didn’t allow for many delays. Another challenge, in the early years of the project, was that the contractors worked around the existing and operational Giants Stadium. The new stadium is a next-door neighbor to the site of the old one—in fact, one section is as close as 30 feet from a corner of the former Giants Stadium. To make this work, the former stadium service road and one of the main gates were left in operation for contractors throughout the 2007 season. In the meantime, Skanska sequenced the project and purchased contracts to accommodate the existing stadium. Skanska held coordination meetings with contractors on a weekly basis to keep the project on schedule.

Star-Lo Electric, which earned $42 million on the project, provided the duct work and power connection into the new stadium. Altogether, Star-Lo electricians ran a total of 27,500 feet of underground conduit—on time, within less than eight months—which carried power to one main substation room for the entire stadium. That substation, in turn, distributes power to four individual substations. Each substation is dual-fed (with a circuit A and circuit B) with tie breakers installed in each one. Each of those substations can operate on either feeder A or feeder B if necessary, but under normal operation, the load is split between feeders A and B, said Steve Doherty, Star-Lo project manager. The facility is also designed so that it can operate on one feeder if necessary.

Star-Lo also brought power into locker rooms, one for the Jets and one for the Giants. Each is suited to the respective team, Doherty said.

Much of the work Star-Lo’s men did was from significant heights, such as installing the power requirements for the field lighting panels on the light basket (catwalk) at the very top of the stadium, 150 feet above the playing field.

Star-Lo powers the star of the show
Star-Lo held the contract to install power and lighting for the premium spaces and clubs, some 190 locations altogether, including a central dimming system provided by Lutron Electronics Co. The system is managed from a command center on the service level, where staff can oversee lighting at all the clubs and premium spaces.

The dimming system is controlled through a different computer, which stores all the preset scenes for all the premium or club areas. This Lutron dimming system can turn preset scenes on and off but can also allow staff at the stadium to change the scenes at any time. The system can also set up one-time scenes at any of the clubs for special events.

Each club is unique. The east and west clubs feature high ceilings with cove lighting and chandeliers, while the commissioner’s club is full of millwork, which conceals all the indirect lighting associated with this club. The 40/40 club includes a high, slanted ceiling that runs with the underside of the stadium and is illuminated with theatrical lighting. The East Club, West Club, and 40/40 club are also accented with green or blue lighting themes, depending on which team is playing.

Altogether, the lighting control system is broken down into 250 preset zones/scenes. Some of the scenes include scenarios such as game-day mode, concert mode, event mode, nonevent mode and security mode. The system can control lighting in individual areas, or rooms, by staff in the command center. In addition, the system can be set into one-time scenes.

Star-Lo provided lighting for the 10 ticket booths, each constructed at entrances in sets of two with a canopy between them. Star-Lo built in lighting for concessions in quads C and D.

Mehl holds its own
Mehl Electric began work at the site in April 2007, rerouting 15-kilovolt feeders from the old stadium and running an additional 55,000 feet of 5-inch conduit to bring power from the substation to the new stadium. Ductwork excavation continued into the summer.

Digging trenches in the brownfield area was challenging from the onset. The area is built largely on swampland and former landfill; so dewatering was a constant part of the project. Not only water, but old pieces of refuse were regularly encountered on the project, e.g., pieces of cars, barrels and other discarded items. To address the water issues, Skanska established a water treatment area known by staff as “The Pond,” where excess water was piped and treated. While high tides could create water problems, low tides were less of a worry.

Mehl installed 2,500 television receptacles for the entire stadium through a change order. That also included 20 giant, high-definition-ready light-emitting diode (LED) pylons designed, manufactured and installed by Daktronics at the north and east entrances with display videos of whichever team is playing.

Mehl provided power to the 20 concession stands in quads A and B as well as power to all signage—a total of 200 signs—inside and at the ticket booths at the entrances. For Bechtel, Mehl Electric/-Communications also built in a wireless panel for additional cellular sites for AT&T to accommodate the thousands of cell transmissions that could be made to and from the stadium.

Throughout the project, about 80 percent of the work was done on lifts, Orban estimated.

Coordinating it all
The entire project required coordination by Skanska and all the subcontractors to work around the existing space and, in some cases, near a still-active stadium next door.

Staging ranged from a simple process to a very involved one, throughout the New Meadowlands project. For Mehl, the company foremen used golf carts to traverse the site while staging, for which space was not a problem.

“We used the field itself [in the stadium],” Orban said. The field acted as a lay-down area, and lighting fixtures were stored under the inner bowl of the stadium.

Some space constraints required Star-Lo to stage the substations and panels in an off-site warehouse approximately five miles from the site and then transport them to the stadium site as they were required.
Doherty said the substations and generators involved detailed coordination.

“They had to be shipped to the site on tractor-trailers and offloaded and set with cranes,” he said.

When it came to lighting, equipment was staged on the facility’s service level within a space of about 5,000 square feet. The day-to-day material was staged on each level as the work progressed, and the workers used a main storage area in the parking lot. Doherty said that Star-Lo electricians transported material with forklifts daily, as it was needed. To accomplish this, the company employed two full-time operators on-site at all times.

Throughout the project, Star-Lo had full-time management staff on-site, including project manager Doherty, two assistant project managers, a full-time estimator, three full-time engineers, a general foreman, two assistant general foremen and 15 foremen, in addition to the forklift operators. Joe Stark, owner and president of Star-Lo, was on-site daily to ensure the schedule was being met. At peak, 170 Star-Lo electricians were at work on the site. Manpower was supplied by International Brotherhood of Electrical Workers (IBEW) Local No. 164 under business manager Richard Dressel and business agent Ed Werner.

“This was a very aggressive schedule. Every contractor did a good job working together. I’d have to say Skanska did a great job running the project,” Orban said.

In addition to participating in regular meetings with Skanska and other subcontractors, Star-Lo held its own meetings to manage schedules and staging on-site twice a week: one on the same day as the Skanska meeting (Tuesday) and a follow-up meeting on Friday.

The challenge of coordination around so many contractors was another hurdle, but meetings kept the project on target.

“What I’m most proud of is the fact that we met the schedule,” Doherty said.