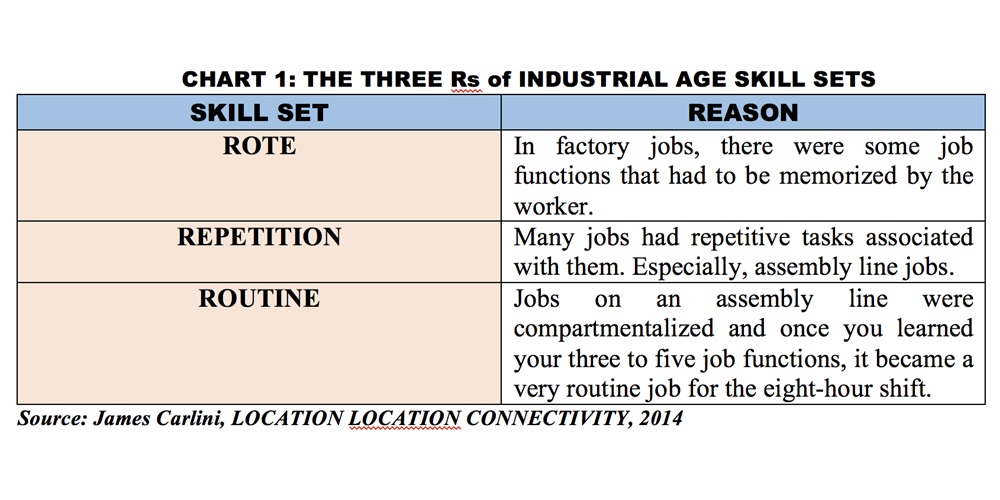 If we don’t rebuild American education, we won’t be able to build in America or buy American.

When it comes to educating the next-generation workforce for 21st century jobs, we need to step back and understand the educational process of how we train and graduate people out of high school as well as college.

The model that has been used for decades in public schools has grown obsolete. It doesn’t matter if you graduated four years ago or 40 years ago. Public schools were designed to develop a workforce that could assimilate into industrial-age jobs. This was a big thing when we were moving from an agrarian society to a more industrialized society. Workers were needed in factories and not just on the farm.

The skill sets needed for factory jobs were the Three R's (See Chart 1).

No, not reading, writing and arithmetic, but the skill sets needed to support assembly lines: rote, repetition and routine. For most factory jobs, you needed to remember a couple of repetitive work movements. Assembly-line jobs were both repetitive and routine in their nature. You really did not have to think too much, just keep doing the two or three job tasks needed to be performed to complete the process on the assembly line.

That standard public school routine of learning the Three R's (rote, repetition and routine), which are skill sets providing a solid foundation to workers to be productive in a long-gone era, is obsolete. Add up those 12 years of public school and you get a fourth R: regimentation.

These are not the skill sets to be productive, nor successful, in today’s mobile internet age. Electrical technicians need to be creative and flexible, and they need to understand a lot to be adaptive to unfamiliar and ever-changing challenges. Nothing is routine on the job.

We must re-think education and skill sets

The jobs and careers of today need a different set of skills to be productive and successful.

The skill sets needed for today and tomorrow’s jobs are flexibility, adaptability, creativity, and technology (FACT) skills. This new FACT-based approach needs to be adopted and implemented in all public schools (See Chart 2).

Not everyone will go to college, and not everyone with a liberal arts degree will find a job. When we look at today’s jobs, they require a different set of skills, and nothing is routine or repetitive anymore. Those jobs have been deeply analyzed and automated by robots.

Without going into a lot of examples, the vast majority of repetitive-movement, assembly-line jobs, have been reviewed and changed out to automated machines, which can perform the job in a 24/7 environment.

Think of all the people who were required in certain manufacturing processes. You don’t need them anymore because their jobs have been automated. Those who relied on the Three R's to get them through a career of 35-40 years have been replaced in many cases two or three decades ago.

In 1987, I worked on a "factory-of-the-future" project that automated an aluminum-processing plant, in Russellville, Ky. The traditional operations approach for an aluminum-processing plant would require 8,000–10,000 people (very similar to a steel-processing plant). With all the automated processes built into the plant, the new requirement for people to manage it fell to 650 people. Most, if not all, would need some technical degree to maintain the facility. Any job just requiring skills of a high school degree were eliminated or automated.

If this is the case, why are we still investing in a “Teach the Three R's” approach in education? This is why there is such a disconnect with high school graduates and the type of jobs they are now qualified for. Most are told you need to go to college or at least some additional vocational training like an associate’s degree or some technical certificate.

You don’t need a bachelor’s degree in medieval languages or a degree in English literature to make coffee at Starbucks (yet that is the best many of these graduates are doing for entry-level jobs).

If you studied the evolution of clowns and jugglers in regional circuses and wrote your final thesis on the socio-economic impact of adding a sideshow to circuses in the 19th and 20th centuries, don’t expect to be admitted into some technical apprentice program where they are looking for people with a solid foundation in STEM (science, technology, engineering and math) studies.

Many school curricula, both high school and college, need to be overhauled to address today’s critical needs. Curricula needs to be refocused to reality.

Shortsighted public school administrators cut out programs that developed good foundational skills for future jobs. In cutting out many sports, music and arts programs, administrators cut out courses teaching everything from team dynamics and working together in groups to execute, perform and deliver finished products to understanding symbolic representation and what it translates to in a symbolic language. (A great foundation for software development where the same type of skills and cognitive reasoning are needed to understand the symbolic representation used for programming and software development.)

In the golden age of United States software development (1970s–1980s), most software developers who were any good also had music backgrounds. Many at prestigious research centers, including Bell Telephone Laboratories, had music backgrounds. The reason why? They understood the concepts and theories of applying rules and structural constructs of a language built in symbolic representation

Building talent for the next generation

We need to refocus public school administrators and their faculties to emphasize developing the right skill sets for success in society. If we don’t, we will be graduating a bunch of functional illiterates who cannot assimilate into good jobs, which in some cases will require additional training, if not continuous training throughout life, in order to remain competitive.