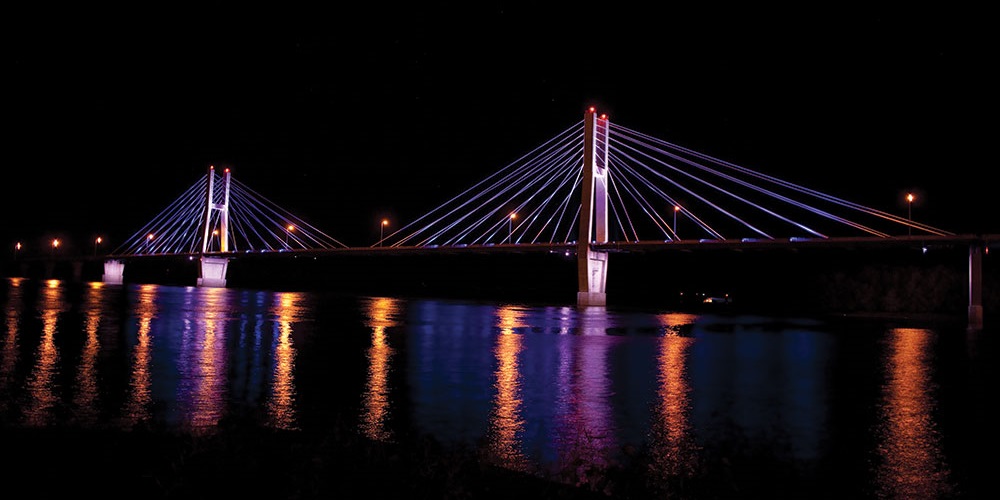 From Quincy, Illinois, the Bayview Bridge carries westbound U.S. Highway 24 traffic over the Mississippi River, connecting to West Quincy, Missouri. The 4,507-foot bridge runs parallel to the Quincy Soldier's Memorial Bridge, which takes eastbound U.S. 24 traffic over the river into Quincy. Built in 1986, the Bayview Bridge is an early cable-stay bridge made with a reinforced concrete super structure and pylons.

In 2007, local civic leaders received a grant from the Illinois Department of Transportation to illuminate the Bayview Bridge. Subsequently, the City of Quincy hired Klingner & Associates and Brown Electric Company to combine their expertise and provide a conceptual lighting plan, constructability review and cost estimates for lighting the bridge structure.

Originally envisioned as a system of monotone white metal halide lights with optional colored filters for special occasions, the project evolved into a cinematic light show with the advent of high-lumen LED light fixtures.

Lighting Associates also provided the custom programming to create the light shows using digital multiplex (DMX) controls, which allow each fixture to be controlled individually, as well as special effects such as fading to create light shows on the bridge structure.

To control the lighting, the team selected a Mosaic controller from ETC, Middletown, Wis. The DMX-controlled lights have 16 custom programmed color sequences, allowing the city to easily display different color schemes. The lighting scheme can be changed easily using a cell phone.

The project did require some finesse managing logistics, though. "The scale and location of the bridge was a big challenge for several reasons," said Locke. "Since the bridge connected two states, we had to coordinate the project with two departments of transportation, Illinois and Missouri." In addition, the team did not want to interrupt traffic patterns on the bridge or the river below while updating the lighting system. This included the barge traffic on the river, which involved turning on and off the below-deck lights at night to help them navigate under the bridge.

The final LED fixture lighting design resulted in a 72 percent reduction in energy consumption compared with the initial idea of the monotone white metal halide fixtures and an impressive 91 percent reduction from the initial estimates when the project was first envisioned in 2002. Actual energy usage has proven to be even less since the fixtures only achieve maximum power consumption when producing certain colors that utilize all four LED colors in the fixture simultaneously. The power consumption to light the bridge on a typical night is equivalent to running two hairdryers at the same time.

The reduced energy consumption also generated savings on initial installation cost, by allowing smaller power conductors and conduit to supply power to the fixtures. With a distance of 920-feet from the electric service to the first tower and another 1,340 feet to the far end of the cable-stay section, this proved to be a significant cost savings.

With the project completed, a brighter Bayview Bridge connects the towns of Quincy and West Quincy and stands as a symbol of the two cities.

"It was an honor to be part of the job that was a first of its kind in our region and has greatly benefited the community we work and live in," said Nathan Nuttelman, president of Brown Electric.­