Getting to the Bottom of It: underground report 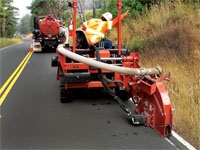 Projects to build and expand broadband networks often bring construction to established neighborhoods, challenging project owners and contractors to build underground networks with minimal disruption of routine activities and limited surface damage. Adding to the challenge is that much of the outside plants of these new systems are underground.

Over the last dozen years, horizontal directional drilling has replaced open-cut construction on many project segments in order to minimize excavation, dust pollution and costly and time-consuming surface repair and restoration.

However, microtrenching has played an increasingly important role on a growing number of telecommunications projects after Quanta Services introduced Q-Trench, a specialized trenching procedure developed specifically to install underground duct for fiber optic cable. Consequently, the amount of fiber cable going into the ground is increasing.

The Fiber-To-The-Home (FTTH) Council reported in March 2012 that, over the previous 18 months, the number of North American homes connected directly to fiber increased from 6.4 million to approximately 8 million. That report stated that the number of homes “passed”—a fiber access network has been brought close enough to connect fiber services—has reached 22.6 million. This is the type of work typically performed by microtrenchers.

The patent-pending Q-Trench construction technique uses specially developed equipment to cut a trench through asphalt from 1/2 inch to just over 1 inch wide at a depth of 12 inches, while, at the same time removing spoil with a vacuum system. After conduits are placed in the trench, the excavation is filled with a proprietary environmentally safe grout that is immune to shrinkage, weathering and erosion.

Q-Trench is available as a turnkey service from Quanta.

“The Q-Trench solution was the first in the marketplace to cleanly cut and vacuum a sub-inch-wide, 12-inch-deep trench in one pass to install conduit for fiber cable,” said Ken Trawick, president of Quanta telecommunications and power generation divisions. “This patent-pending method of microtrenching eliminates many of the concerns associated with traditional construction methods. It also is less expensive and nearly eliminates the disruption in the community that is inherent with other types of construction.”

Trawick is quick to point out that directional drilling and conventional trenching still are used in appropriate circumstances for fiber installation. Microtrenching simply is an effective construction option.

“The key to microtrenching is knowing when to use it,” Trawick said. “As in all construction situations, it is important to select the right process for the job. Microtrenching makes the most sense for areas where fiber deployment is not currently cost-effective, such as downtown areas and congested neighborhoods.”

Introduced in 2009, Quanta projected the Q-Trench process could cut project timelines in half and reduce costs as much as 75 percent. However, refinement of the process has resulted in greater savings, Trawick said. An area that would have been priced at $20–$25 per foot now is approximately $15 per foot. Daily productivity also has increased.

“Two years after its launch, more than 400,000 feet of Q-Trench construction has been completed,” Trawick said. “It is a proven methodology that is successful and lasting.”

The Q-Trench system employs a specially designed saw trenching attachment mounted on the rear of a four-wheel-drive trencher. The microtrencher component resembles a large circular saw. The machine’s saw blade is equipped with carbide bits for cutting quickly through asphalt. The trenching attachment can be offset to enable trenching near obstacles such as curbs and retaining walls. A vacuum hose from a vacuum excavator is connected to the trenching attachment and removes spoil as the excavation is made, transferring it to a holding tank for later disposal.

When conduits have been placed in the trench, Micro Trench SuperGrout, a product exclusive to Quanta Services, fills the trench. Mixed with water, it becomes the consistency of milk and is installed by a two-person crew using a mixer and application wand. Trawick said the fluidity of the grout allows it to surround the cable track without jeopardizing the integrity of conduit holding the fiber cable. In less than 12 hours, the grout cures and becomes structurally sound, and an asphalt sealer can be applied. This eliminates the possibility that fiber will become exposed in shallow trenches due to erosion and weathering. The grout will not erode, but it is relatively easy to remove should it become necessary to access the conduits.

After the excavation is filled, a cap is applied to the surface.

Trawick said Quanta’s core microtrenching process has not changed since its introduction, though certain improvements have been made. The most significant is the asphalt sealer.

An ongoing project illustrates how to integrate microtrenching. Ultimately, this project will place 200 miles of fiber optic cable in the network, about 25 percent of it by Quanta’s Q-trench process. Three microtrenching crews are working on the project, which includes cable routes in city street rights-of-way and on homeowner association property. Cuts are being made parallel to and across streets. Asphalt surfaces range the full spectrum from new to badly deteriorated.

Each crew averages about 1,500 feet per day, Trawick said. Twenty-four hours after trenches are filled, asphalt mastic is applied on top of the grout-cured trench.

The benefits of microtrenching for this project are the speed of installation; low-impacts along rights-of-way in private, upscale residential developments; and cost savings compared to traditional construction methods, he said.

If the Q-Trench system had not been available, Trawick said rock saw equipment would have been the primary option.

“However,” he said, “rock saws would not have been allowed in many areas because of the dust and dirt they cause during construction and the lengthy cleanup and restoration necessary. On this project, microtrenching certainly showcased its capabilities in high-end areas where residents are sensitive to construction that is disruptive to their neighborhoods.”

The MT55 trencher used in the Q-Trench system is a 60-horsepower (hp) machine with a trench-cutting component developed by the Charles Machine Works specifically for use in the Quanta system. The MT55’s saw is equipped with industrial diamond carbide bits to cleanly cut the trench to the project’s exact width and depth specifications.

Disc-type or saw trenching attachments are not new to the underground construction industry, and pavement saws were widely used in the 1980s when the nation’s cable television systems were being built. However, these machines typically cut 6-inch-wide trenches. Before the introduction of directional drilling equipment for utility construction, the saws frequently cut across streets. While traffic was slowed during construction, vehicles still could pass over the 6-inch-wide cuts.

This type of machine was and still is used for cutting expansion joints in streets and highways. However, no saw equipment was available to cut a sub-inch-wide trench in asphalt.

Ditch Witch markets MT12 microtrenching saw attachments for its 40-hp RT45 and 60-hp RT55 four-wheel-drive trenchers. Four microtrenching saws are available: two cutting -inch-wide trenches; one with a cutting width of 0.95 inches, and one that cuts 1 inches wide. All cut to a 12-inch depth. Tooth options are available to fit varying conditions. The microtrench components can be offset to cut close to obstructions. For spoil removal, Ditch Witch recommends a FX60 vacuum excavator equipped with a cyclonic separator to handle the dry, dusty spoil produced by microtrenching.

Vermeer has introduced a microtrenching system promoted primarily for fiber-to-the-premises work. The company’s microtrencher is the 65-hp, rubber-tire TRX 550 model, available with two microtrenching attachments, one for 12-inch depths, the other for 8-, 10-, 12-, or 16-inch-deep cuts. Widths range from to 2 inches, depending on the cutter wheel and tooth configuration. Both models can be offset as much as 2 inches outside the machine’s rear tire. Vermeer also offers vacuum excavators and a grout system.

Digging a growing market
In a still-struggling economy, fiber optic cable deployment is strong. Fiber to the home is now available to about a fifth of the households in North America, according to Heather Burnett Gold, FTTH Council president.

“As FTTH deployment has expanded, the nature of the growth has changed from being largely driven by Verizon’s FiOS build-out to a more broad-based deployment involving hundreds of small and medium-sized telephone companies and competitive broadband companies upgrading from copper to fiber in the last mile of their networks,” she said.

Municipalities and independent telephone companies often operate such “private” fiber networks, seeking assistance from firms that design the system, oversee its construction and can manage its operation, depending on the level of involvement needed by the network owner. Some projects continue to be financed with stimulus funds.

The benefits of private networks are not limited to rural areas—businesses and organizations in large cities often bypass major carriers in favor of a network that exactly suits their needs and has capacity for growth.

GRIFFIN, a construction and tools writer from Oklahoma City, can be reached at [email protected].