Finding Your Way in the Submetering World 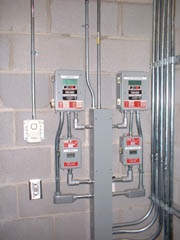 Your Business Testers and Meters

Submeters are installed after the main utility meter to gain additional information regarding energy usage inside a facility, according to Don Millstein, president of Langhorne, Pa.-based E-Mon Corp. Estimates for the submetering market are primarily based on existing facilities, although U.S. sales estimates for submetering equipment range from $30 to $90 million. “It is an extremely hard market to nail down because the major reporting agencies do not track the submetering equipment segment,” said Todd Seal, submetering product manager for Square D Co., Palatine, Ill.

But consider this: It is estimated that in the United States, there are more than 6 million office buildings of more than 1,000 square feet, 450,000 manufacturing facilities and 30,000 retail centers. All of these facilities provide opportunities for electrical contractors to install submetering equipment.

“If the tenants of all of these facilities are metered by the utility, then the opportunity for contractors is just the installation of a few meters to monitor common areas to provide energy management data. However, if multitenant or multidepartment situations exist, and they are not metered by the utility, then anywhere from five to more than 100 meters could be required per facility, based on the number of tenants,” Millstein explained.

And then there is multifamily housing. More than 20 million apartment units exist in the United States, and at least half of them are metered directly by the utility. That leaves more than 10 million opportunities for submetering equipment. “We estimate that the combination of the commercial, industrial and multifamily markets that have submeters installed by all of the manufacturers are only between 1 and 2 million,” Millstein added.

That’s a lot of opportunities for electrical contractors. But will those opportunities continue to grow? “The submetering market is growing consistently at rates around 10 percent,” observed Seal. He attributes the growth to the increasing realization of facility and building owners of the benefits of using submeters. On the other hand, Skip DeBeradinis, president of National Meter Industries Inc., Bedford, N.H., partially attributes the market’s growth to utility deregulation. “Utilities used to resist submetering, but since their prices have restabilized after the onset of deregulation, they are encouraging facilities to use submeters to help contain energy consumption and waste as energy costs steadily increase,” he explained.

According to Charlie Wilde, owner of Integrated Metering Systems Inc. (IMS), Pinellas Park, Fla., the two basic sectors of the metering industry are utility metering and submetering. “Utility metering is done by electric, water and gas utilities, who own the equipment and handle billing and payment collection. Submetering is when the property owner owns the metering equipment and billing and payments are handled by either the property owner or a third-party company,” he said.

Submeters allow the building owner to meter the use of electricity at other locations than the electrical service entrance and to break down data about electricity usage at those points. According to Seal, there are a number of submeter models available on the market, such as traditional electro-mechanical, utility-style meters, and digital kilowatt-hour meters. “All submeter types provide the user with energy consumption information, as well as other data such as kilowatt demand levels, voltages, and currents,” he said.

According to Millstein, submeters are used for six basic reasons: to allocate electrical usage costs among tenants, to allocate electrical usage costs among departments, as a tool for energy management, as a tool to optimize the installation of energy conservation equipment, as a tool to analyze power quality issues and as a tool to detect maintenance issues based on energy consumption patterns. The primary users of submetering equipment are office and apartment buildings, and industrial and institutional facilities. “The ultimate goals of all end-users of submetering equipment is to equitably allocate costs, create an environment that encourages energy conservation, reduce energy cost and consumption, and to improve energy reliability,” he added.

Most of the recent technological advancements in submeters have been in their communication capabilities, including wireless, Ethernet, satellite communications, and the ability of meters to interface with other business systems through open protocols. According to Square D’s Seal, submeters can now regularly transmit data over the facility’s existing Ethernet infrastructure, allowing facility managers to have somewhat real-time access to the information without the expense of having to install a separate network. “Using the existing infrastructure also reduces costs when new buildings are erected within the company’s complex, as most all-new buildings today have Ethernet networks installed in them,” he said. The communication capabilities of today’s submeters also allow facility operators to take advantage of Web technology to remotely monitor, and gather information concerning, electricity usage.

The second generation of smart meters today use microprocessors that allow faster power waveform sampling to gather electrical usage information, allowing the meter to perform more chores, resulting in more—and more accurate—information, according to DeBeradinis of National Meter Industries. “Through surface-mounted electronics, manufacturers of submeters can fit many functions and communication capabilities in a small package,” he said. Other new technologies developed in the past few years include power line carriers, which allow the use of the existing feed wiring for the electrical distribution system to send usage data through the line to the facility’s computer network, RF wireless communications, satellite communications and Internet-connected meters.

Whether submeters communicate information over hard wires, wireless systems or cellular or satellite systems, another technological trend is the use of Automatic Meter Reading (AMR). “Usage and other information is transmitted automatically by the submeters and downloaded directly into the owner’s computer network, or that of a third-party read, bill and collect (RBC) company,” Wilde explained.

One of the most important market trends occurring today is the increased use of submeters to monitor the facility’s power quality, including harmonics, power factors and impulse detection. “Manufacturers are developing submeters that are not only involved in reporting energy usage information, but that also have programming available to controls loads as not to exceed a predetermined demand level,” explained DeBeradinis.

The continued development of smart meters that have built-in communication and data storage capabilities will also be able to accommodate sophisticated utility rate tariffs and real-time pricing scenarios. Observed E-Mon’s Millstein, “Regulations at the state level are becoming more favorable for submetering, and the proposed federal energy bill contains specific language that requires that the 500,000 federal facilities in the U.S. be either metered or submetered. This is a strong statement by the largest energy consumer in the world that metered data is essential to reduce costs and conserve energy.”

Submetering is a large, growing market that offers electrical contractors an opportunity to increase their service offerings, according to Seal. “To successfully enter the market, however, contractors need to learn about the various technologies and understand the intricacies of submeters’ communication network capabilities so that they are in a position to provide the service to the growing number of customers who need to better manage their electrical usage.”

DeBeradinis said contractors who closely follow technology can grow their businesses in the markets of submetering, power quality monitoring and load management service. Some contractors, he observed, have already moved into submetering billing services and building management systems. “Offering submetering billing services is an opportunity for electrical contractors to serve their customers as the meter reader and biller for all of the facility’s submeters,” he said. “The opportunity also exists for electrical contractors to monitor power quality equipment and to provide preventive and reactive maintenance.”

Wilde agrees that electrical contractor who understand submetering have a huge competitive edge over those that do not provide such a value-added offering. “To succeed, however, the contractor needs to get the technical expertise and training from the manufacturer and learn how meters and AMR systems are installed so that they can educate their customers on the benefits and advantages of using submeters.”

In the future, submeters will be developed that have even greater communication flexibility and the ability to interface with building management systems. “The use of submeters will increasingly be expanded into building management, monitoring services, load management and billing services,” according to DeBeradinis. Like most everything else these days, the Internet is predicted to become a big part of this market, allowing facilities to more efficiently monitor and control electricity usage.

IMS’s Wilde predicts that wireless remote submetering, with the necessary radio transmitters integrated directly into the meter package, will be an important future development in the market. “AMR systems are currently somewhat expensive, but as the cost per metered point decreases and as wireless communication systems are integrated into the meters themselves, sales will increase and facility owners will find the technology to be cost effective in terms of saved energy costs and consumption.”

Finally, Seal predicts, the market will eventually see the development of submetering systems that also provide tracking information for a facility’s water and/or natural gas usage. “People are realizing that usage and monitoring information for all the different types of utilities can be tracked through a single, integrated piece of equipment. This will be an additional step toward reducing utility usage and costs,” he concluded. EC