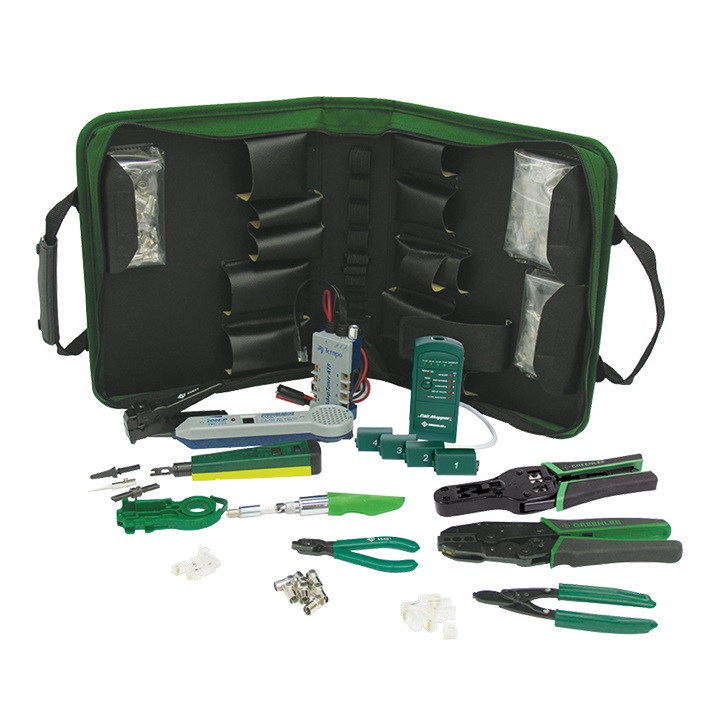 Installers of today’s commercial datacom, control and alarm systems must be multitalented. They often must work with twisted-pair copper, coaxial and fiber optic cables, each requiring specialized knowledge and tools.

Despite the inclusion of fiber in many integrated systems, most of the installed wiring remains twisted-pair copper, and basic termination tools are cutters, strippers, crimpers, punchdown tools—just as they are for electrical wiring. However, voice/data/video (VDV) versions of these tools are geared to help complete VDV work easier and faster.

John Fee, Greenlee’s hand tools product manager, said: “Twisted copper remains the primary cable used in the ,market due to many factors, including its simplicity for termination and repair. Another contributing factor has been the economic downturn; we see more rehabbing of facilities rather than new construction, and, in these rehab projects, twisted copper is being reinstalled.

“A good assortment of basic VDV hand tools would be diagonal pliers, wire strippers and crimpers for coax and small-gauge copper wires, a cable splicer knife, scissors, and a good punchdown tool. VDV tools are specifically designed to cut, strip and terminate the smaller gauge wire in VDV. They work more effectively and efficiently, allowing contractors to complete their tasks faster.

“Essentially, the evolution of these VDV tools has been driven by the need to complete multiple tasks with the same tool, creating efficiencies for completing projects. Durability is always very important due to the tool’s daily use, but ease of use and multifunctionality have been key drivers, saving time and money.

“As the need for greater data capacities continues to increase, fiber is becoming the long-term solution,” Fee said.

Jeff Meader, Ideal Industries’ business unit manager for network tools and consumables, said: “Because steel conductors are not used in twisted-pair applications, specialized cutters are generally not required for data cabling. Scissors, cable cutters and short-blade knives are most used to cut or gain access inside of cable jackets as well as trim cable ends.

“VDV tools are different from electrical tools as VDV tools generally have only one main purpose. A flathead screwdriver or pair of pliers can be used for numerous electrical jobs on any given day. A mod plug tool does one thing—puts mod plugs on the end of a cable. A punchdown tool seats wire into an IDC jack. Compression tools terminate compression connectors. Although some have multiple functions in one tool—cut/strip/terminate—they generally work on a specific application or device and are considered specialty tools.

“Stripping tools to remove the outer Cat 5e or Cat 6 cable jackets are a critical step that is often overlooked. An improperly set blade depth on the stripper can nick the inner conductor insulation and leave a ‘shiner,’ making the inner copper conductor visible where it should not be visible. This can lead to shorts and premature cable failure. Impact punchdown tools with 110 blades for data and 66 blades for telecom applications are the most common termination tools used as they are versatile and can be used on wall jacks as well as cross connects and rack-based termination points.

“Evolution of tools has made compression tools more versatile and accepting of F/BNC/RCA and other connectors, reducing the need for multiple tools.

“More imported tools targeted at the do-it-yourself market have appeared over the past two years and are suitable for occasional installations but are not constructed of materials that are critical to a long-lasting, accurate tool. They are made of more plastic and less metal with fewer replacement parts and are like disposable tools.

“Among the most common installation mistakes are wire order not consistent in terminating modular plugs/jacks, resulting in limited or no service on that path, untwisting pairs too much or running cable too long—which can mean no service or performance issues such as dropped data and intermittent connections—and failure to check for correct wire map. After every connection, basic tests must be made to check for shorts, miswires, opens and split pairs. All are incredibly common for new installer or installers that are a little rusty,” Meader said.

David Mueller, Klein Tools’ senior product manager, said: “In today’s economy, tool durability and good value has become a priority. Improvements in tools for installing copper VDV wiring include step-saving or easy-to-use features such as mistake-proof depth gauges on strippers. Other tool evolutions include the expansion of the tool’s functionality—for example, a punchdown/screwdriver multitool. This provides an all-in-one wall-jack maintenance tool and comes with various blades/tips that are handy for voice and data applications as well as electrical work. Compatibility is another feature that increases the value of a tool. Compression tools designed to work with any manufacturer’s connector shapes or sizes provide greater flexibility and, thus, greater usefulness.

“Making proper connections involves properly using the right tools. Improper cable-end preparation or seating of the cable is caused by wire not being long enough to make contact with the seizing mechanism inside a receiving post or port, resulting in a weak signal. Not properly inserting modular plug wires all the way into a connector to make contact may result in open or failed connections. Another common mistake is modular plugs that are wired in the wrong order, which will result in a failed connection, showing on tests as ‘miswire,’ ‘reversals’ or ‘splits,’” Mueller said.

Todd Cote, Platinum Tools, vice president of sales, said: “The four phases of twisted copper wire termination are cut, strip, terminate and test, and choosing the correct tools to do each phase is a very important step for preparing and performing proper installations.

“Terminating twisted copper wire requires special crimp tools and proprietary connectors. Tools and technology have improved dramatically, and, as markets have converged, tools have evolved to be easier to use and [to] streamline the installation process.

“It is very important that correct terminations are achieved, as they are the backbone on making the installation work properly. Manufacturers have developed simple-to-use VDV installation tools and test equipment to quickly verify that a job is correctly installed with proper connections. Several things can go wrong during the termination process, and following proper procedures can help avoid mistakes,” Cote said.

Rick Salvas, Ripley’s national accounts manager, broadband, said: “The trend in VDV tools over the years has been better overall ergonomics; improved durability; and, most importantly, are tool designs that provide greater functionality.

“It is of the utmost importance for the VDV installer to make a proper copper connection/termination because without one, the network has a potential for failure. The network failure will cause unnecessary downtime and extra expense in finding the root cause for network qualification and certification. The most common installation mistakes are poor and/or improper terminations in regards to stripping, crimping and punchdown at the jack or the block. The end result of these improper terminations is once again the potential failure of the network,” Salvas said.

Greenlee’s John Fee said that, as the need for greater data capacities continues to increase, fiber is becoming a long-term solution in the market.

“We do not have firm data, but we estimate that the ratio of copper to fiber is in the neighborhood of 80/20,” he said.

Most discussions of cabling types used in VDV systems focus on twisted-pair copper and fiber optic cable. However, coaxial cable is used in CCTV monitoring and security systems, and coaxial remains the cable of choice for most entertainment interconnects within the home. Coaxial requires specialized cutters, strippers and crimpers designed for the specific cable size and connector type used for proper termination.