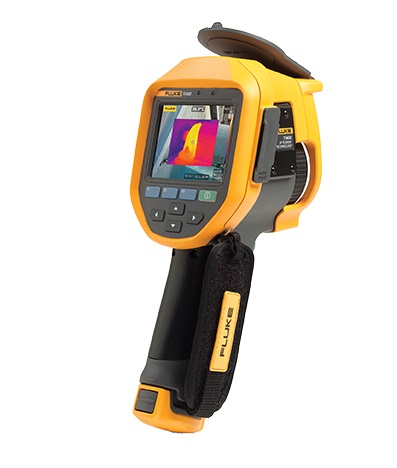 Thermal imaging technology that employs infrared (IR) cameras to detect and measure heat has many applications across a wide range of industries. For electricians and datacom technicians, these cameras simplify troubleshooting and maintenance by providing a fast, nondestructive method to detect potential problems in system connections, fuses, junction boxes, switchgear and other components. Models range from the simple and inexpensive to far more sophisticated equipment with multiple capabilities.

“Basic thermal imaging applications for the electrical industry have not changed,” said Michael Stuart, thermography services manager and Level III certified thermographer, Fluke Corp. “But there have been changes in temperatures of the electromechanical equipment, and, therefore, thermography equipment and practices have changed. Today’s thermal imagers offer higher accuracy and better image quality in lower priced models, thanks to the continuous engineering cycle where we develop new capabilities for high-end imagers and then apply those capabilities throughout the rest of the line.

“Overall accuracy has not actually changed that much. Rather, it’s the ability of the user to obtain a higher accuracy image that has changed, due to features such as laser focus, where a laser range finder uses distance measurement to precisely determine lens position for the most accurate image possible at a given distance. There also is a greater variety of screens and image-resolution technologies than in the past.

“Wireless connectivity between the imager and cell phone apps allows users to automatically organize imagers by equipment in a central location, making it easy to access and reference prior images during the next inspection as well as allowing instant sharing of images from the field to enable on-the-spot approvals and other decisions for the next steps,” Stuart said.

Improved user interfaces and software also streamline the process for experienced users and make it more intuitive and easier to get started for personnel who only occasionally use thermal imagers. Fluke offers nine models, ranging in price from $1,000 to just under $10,000, plus a simpler format, carry-along visual thermometer starting at $400. With fewer temperature sensors than a thermal imager, the visual thermometer provides a “heat map,” can save images for later comparison, and includes software for generating reports.

“The value of thermography for conducting inspections without coming into direct contact with a live electrical panel always has been readily apparent to contractors,” Stuart said. “Contractors want to quickly get to the bottom of client problems, and thermal scans help narrow down the problem location. Thermography inspections are quick, provide visual report-outs to the client that are easy to communicate, and keep contractors on-site where they are in a better situation to identify additional job opportunities. Finally, a broader range of pricing and features has created more realistic value for more types of professionals and contractors.”

Brent Lammert, vice president of sales, Flir Systems, said thermal imagers give contractors a noncontact method to measure a rise in temperature and determine the severity of a given situation. If there is a clear temperature difference, e.g., a hot spot, a thermal camera with suitable resolution will detect it quickly.

“Contractors also can save time by scanning large areas of electrical equipment, rather than inspect dozens of components or connections with an IR thermometer, or spot temp gun,” he said. “An additional benefit is that electrical contractors can easily share thermal images with customers or co-workers, either in written reports or through email. These reports let them demonstrate visually what problems require further investigation. This documentation helps facilitate faster responses and repair decisions. After the repair, the contractor can refer to the thermal imaging for visible proof that the work has been completed and the problem resolved. This is a huge benefit.”

The biggest developments in thermal imagers are the reduction in both prices and sizes.

“The result is that there has been a greater deployment of imagers, and contractor personnel are finding more problems earlier because more of them have thermal imagers,” Lammert said. “Lower prices are, in part, the result of more compact thermal camera cores. Flir recently launched a thermal sensor that is smaller than a dime and produces a thermal image at a resolution of 80-by-60 [4,800 pixels]. With it, we will be able to create even smaller, more powerful tools that can be clipped to a work belt or tossed in a tool bag.”

He said that working electricians and thermographers can do much more today with the information that a thermal imager captures, due to new features that turn imagers into more powerful diagnostic tools. With icon-driven menus that are pretty intuitive, cameras are also much easier to operate.

“Of course, there still are models that have a point-and-shoot simplicity that are perfect for users who may not need the higher end capabilities,” Lammert said. “Flir has a wide range of models, from entry-level imagers to those with higher resolution and advanced features for electricians who are more experienced thermographers.”

“With a thermal imager, contractors can work faster, document what they find more accurately, and work from safer distances,” he said. “All of our newest handheld cameras include both a thermal and visible light camera. MSX embosses edge details from the visible light camera onto the entire infrared image in real time. The result is an all-in-one thermal picture with numbers, labels and other structural features intact, so electricians can instantly recognize where the heat issue is and reference the exact spot for repair later. With price points as low as they are, we will soon see each electrician carrying his or her own thermal imager, rather than having to share it with a larger team.

“Which model is appropriate for a given application depends on a variety of factors, including how often the camera will be used, the angles electricians will be shooting from, target size and distance.

“I believe we are on the cusp of thermal imaging breaking into the mainstream, and, when that happens, interest in this technology will likely increase exponentially. It is such a resourceful tool; we want to put thermal imaging into the hands of every electrician,” Lammert said.

Flir and Fluke both offer broad lines of thermal imagers, but other well-known tool providers are adding them to their product lines as demand has increased. Milwaukee Tool, long known as a manufacturer of power tools, has aggressively expanded its product line to include hand tools and testing equipment, including a 160-by-120 thermal imager.

“There have been significant improvements over the last few years in the areas of image quality, more compact tool size, and simplicity, but the most notable and significant change has been price point,” said Corey Dickert, director of product marketing, Milwaukee Tool. “The cost of sensors has gone down dramatically, allowing users to purchase higher quality units for much less than they could four or five years ago. This allows users to get a full return on their investment much faster than they could in years past, opening the door to a steady increase in the adoption rate for thermal imagers across the electrical trade. With the growing trend toward energy efficiency, and the decrease in price for high-quality thermal imagers, more users are adding thermal predictive maintenance to the services they offer.”

Dickert said common applications for thermal imagers include inspecting electrical connections and checking for unbalance in circuits to detect early warnings of failure, safety hazards and where energy loss is occurring. The most frequently inspected equipment in these applications include switchgear, breakers, bus ducts, fuse clips, transformers and capacitors.

“There is a growing trend toward energy efficiency and removing aging electrical equipment that affects efficiency,” he said. “Because of this trend, one of the newest applications is inspecting the electrical connections of high-efficiency, low-voltage systems such as LED lighting and HVAC controls.”

Thermal imagers have the potential to be very complex, so simplicity is key, Dickert said.

“Users demand tools that are intuitive and simple to understand so that they spend more time doing work and less time learning how to use the tool,” Dickert said. “We built our thermal imager from the ground up to deliver a simple and easy to use, high-quality unit. Users are able to capture a thermal and visual image on every trigger pull and toggle between the two with the simple push of a button. It is also worth mentioning that Milwaukee was the first in the thermal imager market to leverage a power tool battery platform. By using the Milwaukee M12 battery, the tool is compatible with the entire Milwaukee M12 system of professional power tools, a huge value to the users.”