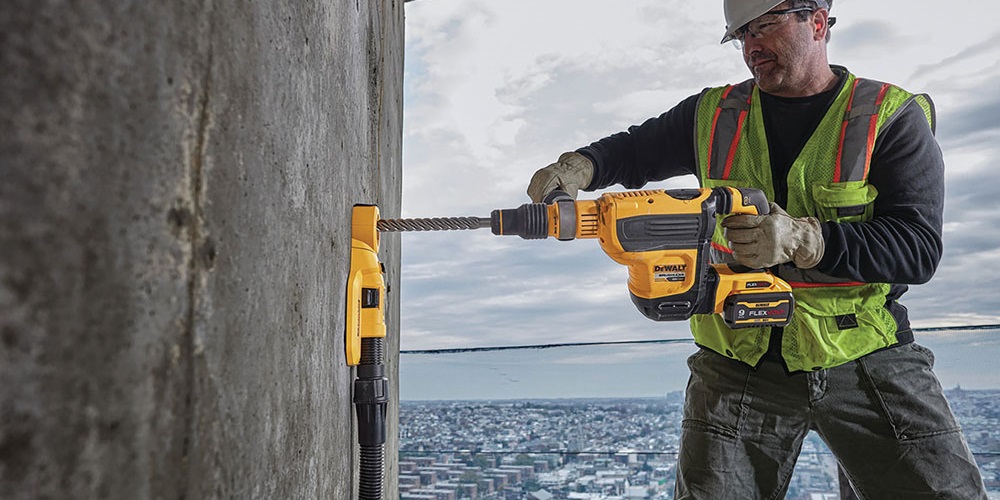 A rotary hammer is one of the most powerful electric hand tools and is many electrician’s tool of choice for making holes in concrete blocks and brick. Rotary hammers help them install anchors for conduit clips, junction boxes and cable trays and to make through holes for conduit.

Even after cordless tools became widely acceptable, many users continued to prefer corded rotary hammers because of their size, weight and power consumption and the frequent need to make multiple holes.

With lithium-ion batteries, however, cordless rotary hammers match corded tools in productivity and can work a full day on a single battery charge. Another significant advancement is the addition of dust-control systems.

While demolition hammers also are used for drilling in hard materials, experienced workers of all trades know demo hammers may be acceptable for light-duty work, but they can’t match the productivity of a rotary hammer.

Mechanisms for drilling are nothing alike in the two tools.

“Like hammer drills,” he said, “they produce a pounding force that allows them to efficiently penetrate masonry, such as concrete, and the engineering of rotary hammers differentiates them from hammer drills.

“Sliding discs power the chuck in a hammer drill, while a piston driven by a crankshaft creates a rotary hammers’ pounding action. The resulting air pressure drives the rotary hammer mechanism, giving it much more impact energy than a hammer drill.”

Tsiolis said many rotary hammer innovations have been introduced in the past three years.

“First and foremost,” he said, “there has been a switch from corded rotary hammers to almost exclusively cordless ones. The need to work overhead and in tighter spaces has been the primary driver of this shift. And cordless tool innovations have made these demands manageable. For example, the transition to a cordless model for drop-motor-style hammers has led to the tool’s decreased weight and shortened length—design characteristics that have made them more versatile and easier to handle in dynamic settings.

“Bosch has been able to add ‘soft starts’ to cordless models, which allow the tools to ramp up to top speed and eliminate skating (when the accessory moves from an intended drilling spot) as well as creating a cleaner hole. We also have made significant safety-related improvements, such as adding a kickback control function that automatically shuts off the tool if it encounters a binding situation. And the hammer immediately detects hitting embedded rebar in concrete and turns off to protect the operator from injury,” he said.

Rotary hammers use SDS-Plus or SDS-Max bits, and there are numerous lengths and diameters of bits available, Tsiolis said.

“There also are completely dustless options, including Speed Clean bits that connect directly to vacuums to ensure that drilled holes are dust-free and ready for anchoring. There are also traditional bits, such as those with flutes to pull out debris as the bits make their way through a given material. We offer a full-head carbide tips which extends accessory life in concrete and also drills through a rebar strike,” he said.

Tsiolis concluded that today, users have largely adopted SDS-Plus cordless hammers since technology has advanced to where performance compares to corded counterparts. However, he added, some users still hesitate to cut the cord when needing larger models.

“We are addressing that with a rotary hammer that actually will outperform corded models in the same class,” he said.

According to Ricky Cacchiotti, concrete products manager for DeWalt, Baltimore, DeWalt cordless rotary hammers deliver the power of corded in a cordless format, so going 100% cordless is now an option for the electrical craftworkers who require a medium-duty cycle.

“Our typical SDS-Plus cordless rotary hammer, fitted with an OSHA Table 1 compliant dust extractor, in a rod-hanging application can drill enough holes to hang 670 feet of pipe with a single battery charge,” he said. “A good electrician can hang 400 feet on an average day, so there is no good reason to not go cordless.”

“Buyers are looking at the ease of repairing the wearable heads at the front of the tool and filter replacement and emptying,” he said. “We have standardized all of its dust boxes and offer four rotary hammer and dust-extractor combinations that all use the same box.”

Cacchiotti said DeWalt’s product line shift from corded to cordless is directly related to the efficiency of overall battery/motor/transmission systems, which allow for superior performance and durability of the brand’s cordless tools.

“Our focus is developing tools with a smaller footprint, while increasing the tool’s power density,” he concluded.

Artie Reams, product manager for Hilti, Plano, Texas, believes the expansion of onboard dust-collection capability has been a critical change.

“Most major manufacturers offer multiple cordless rotary hammers that incorporate a vacuum,” he said. “This allows the operator to drill holes and help protect them from silica dust without the need of an external dust extractor. In addition, rotary hammers continue to get lighter, more compact and faster.”

Many rotary hammers, he continued, offer interchangeable chucks that allow for right-angle drilling, receiving bits for wood drilling, or other types of connections, such as Jacobs chuck or SDS-Plus. If a drill-bit connection end matches the rotary hammer’s chuck, no additional accessory should be required.

“The acceleration of battery technology heavily influences increased performance,” Reams said. “We see cordless rotary hammers becoming as powerful and, in some cases, more powerful, than corded rotary hammers. Convenience, access to tight spaces, and eliminating the need of managing extension cords are just a few reasons electricians have made the jump to cordless rotaries.”

Carbide drill bits and core bits are used to perforate concrete and masonry. For hammering functions, there are ground rod drivers, accessories for chiseling, and scrapers and bushing tools for various applications.

“Cordless rotary hammers have really taken off with all major platforms offering cordless versions of smaller rotary hammers powered by high-performance batteries. Advances in technology have provided more powerful cordless tools with efficient batteries that allow for much more run time and portability than in years past,” Brandon said.

“There also is a platform with an AC adapter that works across the entire tool platform, allowing users to remove the battery and plug in when portability isn’t required. Ergonomic grips, shock-absorbing handles and counterweight technology in some models allow users to take advantage of longer run times with reduced risk of duration-related use injury.”

Brandon said cordless rotary hammers haven’t yet replaced corded models. Corded models are preferred when the work is more stationary, there is ample AC power, or for more demanding applications that would quickly drain even the best batteries.

According to Kevin Gee, group product manager Milwaukee Tool, Brookfield, Wis., rotary hammers are widely used for drilling holes in concrete to anchor electrical subsystems and run conduit, cable trays and more. In commercial work, rotary hammers are primarily used to anchor to the ceiling and are sometimes used to drill holes for passing wires through walls.

“The biggest shift in the rotary hammer market has been the move to cordless models,” he said. “That said, rotary hammers are one of the few power tool categories where a lot of corded models still are being used. But with the technology of lithium-ion and the advancements in motors and electronics, cordless tools can now meet or even exceed the performance of corded.”

Gee said Milwaukee introduced its first cordless rotary hammer that could replace its corded alternative in 2014. Today, the company offers a full line of hammers that operate on a single battery platform that powers many of the brand’s other 18V cordless tools.

There are three primary bit-retention splines.

Matching tool size to the application is important.

“Users often choose the wrong size rotary hammer for the application,” Gee said. “Or they attempt to push a standard hammer drill past its limit. Users need a rotary hammer that is optimized for their most common applications so it will deliver increased productivity.”

Regarding dust control, Gee cited the M12 Hammervac universal dust extractor with certified HEPA filter, which removes 99.97% of particles greater than 0.3μm. He said the product recently was updated with a new dust box to allow users to easily clean the filter with a press of a button, making any tools equipped with this system OSHA-compliant through Table 1 requirements.

Another product, the Dust Trap, has a clear sleeve that provides visibility when lining up the hole and during the drilling application. Once attached to the front of a rotary hammer, it keeps dust contained throughout the duration of the drilling process.