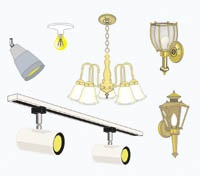 Article 210 specifies provisions for all branch circuits except for branch circuits supplying only motor loads. Article 430 contains motor load requirements. Provisions stipulating the placement of receptacle outlets are covered in 210.52 through 210.63. These provisions were the topic of discussion over the last 12 months. This month’s In Focus begins a new series covering required lighting outlet provisions.

Branch circuits supplying lighting outlets must be installed in accordance with the provisions in 210.70(A) through (C). Most of the requirements in this section pertain to dwelling units.

It is important to have a good understanding of certain words and phrases used throughout the National Electrical Code. Some of these terms and other related requirements will be discussed before covering the lighting outlet provisions in Article 210. Article 100 contains selected definitions that are essential to the proper application of the Code. While it does not include commonly defined general terms or commonly defined technical terms from related codes and standards, it does include terms that are used in two or more articles. Other terms are defined in the article in which they appear but may be referenced in Article 100.

The term luminaire is, to some extent, new to the 2002 edition of the Code. Although luminaire has been in the last two editions, it only appeared in a fine print note following 410-1. Luminaire is now the main term and fixture(s) or lighting fixture(s) follow in parentheses. Article 100 defines luminaire as a complete lighting unit consisting of a lamp or lamps together with the parts designed to distribute the light, to position and protect the lamps and ballast (where applicable), and to connect the lamps to the power supply (See Figure 1).

An outlet is a point on the wiring system from which current is taken to supply utilization equipment. A lighting outlet is an outlet intended for the direct connection of a lampholder, a luminaire or a pendant cord terminating in a lampholder. Luminaires can be ceiling-, wall- or even floor-mounted (See Figure 2). While the wiring for lighting outlets can terminate in outlet boxes and in other boxes under certain conditions, it can also terminate in junction boxes of luminaires.

As stipulated in 314.27(A), boxes used at luminaire or lampholder outlets must be designed for the purpose. Every box used solely for lighting must be designed or installed so that a luminaire may be attached. Outlet boxes are usually equipped with two No. 8 (8/32) screws to support luminaires or their supporting yokes. Outlet boxes can support luminaires weighing no more than 50 pounds (23 kg), unless the outlet box is listed for the weight to be supported (See Figure 3). Luminaires can also be supported independently of the outlet box [314.27(B)].

Inspection of the connections between the luminaire conductors and the circuit conductors must be possible without having to disconnect any part of the wiring unless the luminaires are connected by attachment plugs and receptacles [410.16(B)]. Inspection of the wiring connections is possible with most luminaires simply by removing it from the wall or ceiling.

A wall-mounted luminaire weighing no more than 6 pounds (3 kg) can be supported by other boxes (or plaster rings secured to other boxes), provided the luminaire or its supporting yoke is secured to the box with at least two No. 6 or larger screws [314.27(A) Exception]. As long as the weight being supported does not exceed 6 pounds (3 kg), the wall-mounted luminaire can be supported by boxes (such as device boxes) not specifically designed to support luminaires. This exception does not specify whether the box must be mounted horizontally or vertically. In the previous edition of the Code, this exception contained one additional stipulation. If the luminaire had any dimension greater than 16 inches, the luminaire could not be supported by other boxes that were not specifically designed for the purpose. Now, regardless of the size, if the luminaire weighs 6 pounds or less, this exception can be applied. For example, a wall switch in one room of a dwelling controls a wall-mounted luminaire weighing less than 6 pounds. Since this installation does not require a box that is specifically designed for the purpose, many options are available. For this installation, a 3 x 2 x 21/2-inch (75 x 50 x 65 mm) device box has been installed (See Figure 4).

Where a box is installed as the only support of a ceiling-suspended (paddle) fan, the box must be listed for the application and for the weight of the fan being supported [314.27(D)]. These types of boxes are usually labeled “ceiling fan box.” Ceiling-suspended (paddle) fans with a combined weight, including accessories, of not more than 35 pounds (16 kg) can be supported by outlet boxes identified for such use. Also, the outlet box must be supported in accordance with 314.23 and 314.27 [422.18(A)]. While boxes supporting luminaires can support 50 pounds (23 kg) or less, boxes identified for supporting ceiling-suspended (paddle) fans are limited to a maximum weight of only 35 pounds This includes accessories, such as light kits. (See Figure 5).

Ceiling-suspended (paddle) fans weighing more than 35 pounds including accessories must be supported independently of the outlet box [422.18(B)]. Ceiling-suspended (paddle) fans with a combined weight, including accessories, of not more than 70 pounds (32 kg) can be supported by listed outlet boxes (or outlet box systems) that are identified for the purpose [422.18(B) Exception].

Next month’s In Focus, continuing with 210.70(A)(1), will continue discussion of required lighting outlets in dwelling units. EC

MILLER, owner of Lighthouse Educational Services, teaches custom-tailored classes and conducts seminars covering various aspects of the electrical industry. He is the author of Illustrated Guide to the National Electrical Code. For more information, visit his Web site at www.charlesRmiller.com. He can be reached by telephone at 615.333.3336, or via e-mail at [email protected].