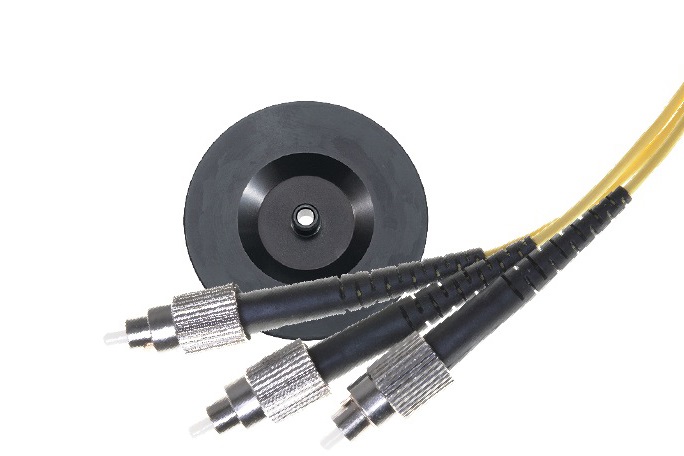 Now that we have covered the process of stripping the fiber and attaching the connector with an adhesive, the connector is ready to polish. The biggest problem with polishing a fiber optic connector is patience. Like any other process that requires skill, polishing connectors means the installer cannot rush the process, take shortcuts or ignore some simple rules.

To cleave the fiber, use a fiber scribe to gently scratch the fiber just above the ferrule end—not hard enough to break the fiber, just scratch it. Then hold the connector body in one hand, take your thumb and forefinger of the other hand and slide down the ferrule toward the end where the fiber is. As your fingers reach the end of the fiber, gently grab the fiber and pull away from the connector and very slightly to the side.

Now you are ready to polish. Most connectors are polished in three steps:

1. Air polish with a coarse polishing film (~12 micron grit) to grind the cleaved fiber down near the ferrule end-face

Some installers say you can skip the final step with multimode fiber, but it gives a better polish. That means lower loss and less reflectance.

Air polishing is just polishing in the air. Hold the 12-micron polishing film in one hand, and put a bow in it to make it stiff. Rub the cleaved fiber against the film in circles or figure-eights. You should see a fine line on the film where the fiber is being ground down. You can check the polishing process by gently touching the end of the ferrule to a fingertip. When you can barely feel the fiber, you are done. Do not overpolish! Wipe the end of the connector with a lint-free wipe moistened with alcohol (the same 99 percent isopropyl alcohol used to clean the fiber).

You must always finish polishing on a soft rubber pad. It should be ⅛-inch (3 millimeters) thick and have a hardness of 80 durometer. The pad is placed on top of a flat plate for a smooth surface, but the connector end-face will deform the rubber and the fiber will be polished to the same convex surface as the connector ferrule.

You need a polishing puck that holds the connector at the proper angle while you polish. You can get pucks made from stainless steel, nylon, glass-filled plastic and other materials. We prefer the glass-filled plastic pucks as they are cheap, lightweight, easy to hold and do not seem to leave residue on the polishing film.

One difficulty for many users is how much pressure to use when polishing. Two Fiber Optic Association (FOA) instructors at a training center developed a unique way to teach how much pressure to use. They have their students practice polishing on a postal scale until they get the right pressure. (They sent The FOA a video of this, which is posted on The FOA’s YouTube channel at www.youtube.com/watch?v=vWEGBruEfG4.)

Starting with the 3-micron film, polish in a figure-eight pattern several inches across. Look for the fine line made by the fiber as it is polished away. It will disappear when the polish is complete. There is an easier way to tell when this stage of polish is finished: the drag on the connector drops and the film feels slick. That’s when to stop.

Once you learn these steps and practice in your office, all of this will take less than a minute in the field. You should be able to get multimode connectors that average less than 0.3 decibel loss, lower with more practice. Also, you should get good connectors almost 100 percent of the time.