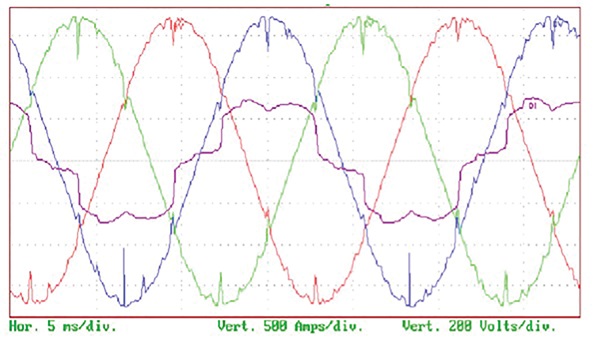 Maybe it is because they are rarely seen by the human eye or because the proliferation of surge protector strips makes everyone feel immune, but transients still exist and can wreak havoc with electrical equipment. The high magnitude and fast rise time of voltage transients, caused by lightning or switching operations, can degrade or cause immediate failure in all equipment classes. They can break down the insulation and rotating machinery, transformers, capacitors, cables, current and potential transformers (CTs and PTs), semiconductor devices, and switchgear. Even repetitive lower-magnitude transients can chip away at insulation or dielectric material, leading to eventual failure. Some monitors often miss such power quality (PQ) disturbances because of slow sampling rates or inadequate trigger algorithms.

IEEE 1159 2009, Recommended Practice for Monitoring Electric Power Quality, describes voltage transients in terms of types, characteristics and sources. IEC 61000-4-30 Ed 2, Electromagnetic Compatibility, does not address them in the document’s normative section. Instead, it refers to the informative annex, going so far as to state, “Measurement of transient voltages can be useful but is not mandatory.” Just because transient effects—such as lights blinking from voltage sags—can’t be seen by the human eye doesn’t make them any less important.

Transient definitions generally don’t convey a real sense of what we are dealing with. In general, transients are subcycle events, measured in a few milliseconds’ duration or less. Any longer and there will likely be an rms variation significant enough to be considered a rapid voltage change, sag or swell.

A transient can be voltage and/or current and, as long as Ohm’s and Kirchhoff’s laws still apply, will occur as both, even though the magnitudes can be radically different. Transients can be a unidirectional impulse of polarity, bipolar impulsive transient, or a damped oscillatory wave with the first peak occurring in either polarity. Table 2 from IEEE 1159 gives a good overview of their magnitudes and durations. The abbreviation “pu” stands for “per unit,” which can be thought of as “X times the nominal.”

Additional characteristics can be used to describe transients and act as clues as to the source. The direction of the transient can be positive, negative or both, where the direction is relative to whether the transient adds (positive) or subtracts (negative) energy from the waveform. A positive transient requires a source that can add energy, such as lightning. A negative voltage transient is often the result of a large current transient that drops voltage across the source impedance, resulting in a reduction in the voltage at the measuring point. An example is the notches that can occur in three-phase, full-wave rectifier circuits during the commutation period when two semiconductor switches are on simultaneously, which effectively shorts one phase to another until the first switch full turns off, as shown in Figure 1.  The purple waveform is the current of the blue phase.

In most normally operating electrical systems, the power-factor-capacitor transient is usually the most common transient. These PQ events often occur twice per day, when energized in the morning and de-energized at night. Since the uncharged capacitors don’t like to have their voltage changed instantly, the sudden application of a large capacitance to an electrical distribution system causes a negative transient, resulting in a large current transient. Likewise, the wiring’s inductance doesn’t like to have its current changed instantly, so it creates a voltage transient in response. This give-and-take occurs for a quarter of a cycle or so, as the wiring’s resistance dampens out the ringing or oscillatory waveform. Occasionally, the cap banks have failures, such as a blown fuse in one phase or back-to-back restriking, as shown in Figure 2.

There are other sources of oscillatory transients, including ones with primary frequency component greater than 500 kilohertz (kHz). These high-frequency oscillatory transients are almost always due to some type of switching event or a power electronic device and can be the result of a system response to an impulsive transient.

As mentioned above, many people think transient voltage surge suppressor devices (TVSS) eliminate any transient problems. To some degree, that is true because the devices can clamp the transient voltages at a predetermined level. That leads to recommendation in IEC 61000-4-30. For this reason, the transient current is often a better measure of the severity of alternating current system transients than the transient voltage. It’s actually better to measure both, provided that the CTs can pass the high frequency waveforms through them. A metering CT with a 1-kHz bandwidth isn’t much use for measuring such a use. However, without proper grounding, the TVSS cannot function properly. Also, each time the clamping devices do their job, they lose some of their ability to protect, eventually either letting the voltage clamp too high to be effective, or they self-destruct. It is a good practice to monitor for transients no matter the protection employed, because they can still hurt your system even though you can’t see them.