The Next Lighting Revolution: OLEDs 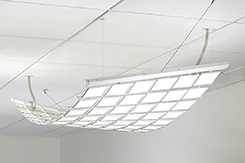 Invented in the 1980s at Eastman Kodak, organic light-emitting diodes (OLEDs) are composed of a layer of organic material situated between an anode and a cathode and deposited on a substrate. When voltage is applied to the OLED cell, the injected positive and negative charges recombine in the missive layer and create electroluminescent light. A modern OLED device may use many layers to improve efficiency, but the basic functionality remains the same.

With an estimated 22 percent of electricity generation going to lighting in buildings, a highly efficient OLED lighting system could significantly reduce electricity demand, according to a June 2013 white paper from E-Cubed Ventures, a San Francisco-based venture acceleration firm. In addition, according to “OLED Lighting Markets—2014,” a report from the market research firm NanoMarkets, OLEDs’ promise of energy efficiency and flexible lighting applications is predicted to be a $1.4 billion opportunity in 2019. In addition, NanoMarkets believes that, in the next five years, there will be a major influx of low-cost, and possibly government-subsidized, Chinese suppliers that will force down OLED lighting prices in a manner similar to the solar-panel industry.

In the last year, OLED performance levels have experienced a tremendous jump. The technology now produces high efficacy, improved R9 color rendering rating and long-rated life of 30,000–40,000 hours at L70, according to Jeanine Wang, director of business development and marketing for the OLED Group at Acuity Brands, Atlanta.

The rising interest in OLED technology is evident in the increase in OLED panel suppliers and luminaire manufacturers.

“The numbers are still small, but the industry is starting to see more companies introduce OLED products, demonstrating the increased awareness and understanding of the technology and making OLEDs more available for lighting designers’ use,” said Michael Boroson, chief technology officer for OLED Works, Rochester, N.Y.

The first commercial OLED applications were mobile phones, portable digital media players, car radios and digital cameras, among others. Such applications have favored the high light output of OLEDs for readability in sunlight and their low power drain. However, the appeal of developing OLEDs for lighting applications is gaining renewed optimism.

So far, actual OLED lighting installations in buildings have primarily been in more architectural scenarios, according to Boroson.

“However, the technology is moving quickly into more practical applications and is being used in some general lighting demonstration installations,” he said.

For example, the United States chose OLED lighting for its embassy in Finland based on the technology’s naturally diffuse, no glare, white light that is cool to the touch and dimmable.

“OLEDs’ thin profile and their ability to integrate into architectural schemes enable them to create strong design statements that promote their use in more creative ways than other light sources,” Wang said.

New applications fast approaching for the technology are in the areas of step and marker lights and decorative and path sconces, according to Boroson.

“OLEDs are still too expensive for whole-space lighting, but they are gaining traction as people realize their nonglare benefits,” he said.

With the growth of OLED panel manufacturing and applications, ECs need to understand the technology’s benefits, how to best apply them in relation to other light sources and the challenge of the limited luminaire choices.

Technology exhaustion from the shift to LEDs is another obstacle, Boroson said.

“Manufacturers and electrical contractors had a steep learning curve shifting to LEDs’ digital lighting technology,” he said. “But, with OLEDs, that learning curve is minimal, and companies already have the necessary digital expertise in-house.”

Contractors should also note that OLEDs could potentially use Category 2 wiring instead of sheath cable wiring, making them simpler and more cost-effective to wire and install.

Finally, the industry needs to overcome the perception of expense and promote the technology.

“All industry participants need to be more willing to look at the technology per application and not assume OLEDs are the more expensive option,” said Pete Shannin, vice president and general manager of Acuity’s OLED business group.

According to Boroson, costs of OLEDs are actually competitive, particularly since they don’t require heat sinks or additional optics.

As OLED technology matures, Shannin said more panel sizes, shapes and substrates used in their manufacture will emerge, creating dynamic colors and enabling the integration of smart technology with OLED lighting system for greater control and an enhanced user experience.